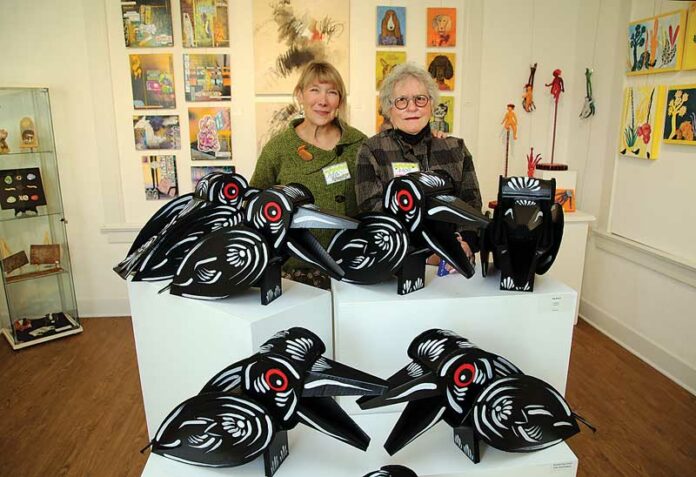 “Take Aways: Art to Go!” features a variety of work by 73 artists, most of them locals from Watsonville and surrounding areas. Everything from painting and sculpture, fiber and mixed media, encaustic (wax) art, print-making, photography, glasswork and more are included.

The exhibit has artists submit between 4-8 works for the show, all priced under $350. Art buyers are able to “take away” pieces the moment they are purchased, with artists and the gallery both receiving a commission.

“I have to say, I think we did a good job this year,” said Jane Gregorius, who curated the show with Chris Miroyan. “The work we’ve assembled is strong. We’re very excited about this show.”

The exhibit came quicker this time around, after last year’s exhibit was pushed to March. This gave organizers and artists a bit less time to prepare.

“With only 10 months between the shows instead of a year, it was a bit harder,” Gregorius said. “Artists would say, ‘but didn’t you just do that show?’ We did have some people who dropped out because they couldn’t get things done in time.”

But the exhibit is popular, Miroyan said, and PVA staff is dedicated.

We are such a tight team here,” she said. “We’ve all worked together for a long time, we are deeply committed to this. Going into two years of this pandemic, the strain and stress is starting to show on all of us … But we rallied, and pulled it together again.”

Gregorius and Miroyan praised all the artists, who they say are more diverse than ever. Artist Eva Bernstein is displaying her trace monotype art, which are drawings created by laying damp paper onto a plexiglass palette.

Taylor Reinhold, mostly known for his large billboards, will be selling pieces he translated into smaller artworks. And Dag Weiser works with corrugated cardboard; his crow creations have “taken over” a section of one room, and will run for only $50 each.

“What’s really fun about this show is that you never know what’s going to come in,” Miroyan said. “You get to create this giant painting with other people’s art. You’re trying to make it all flow together and it’s like putting this big puzzle together. It’s so much fun.”

“Take Aways” also offers people a chance to win art pieces. Artists can choose to donate pieces, allowing 100% of sales to go to supporting PVA. Raffle tickets are available throughout the show’s run, and the drawing will be held at the closing reception on March 6 at 3:30pm.

Gregorius and Miroyan said they were helped greatly by PVA’s Carol Walberg with that aspect of the show.

Looking ahead, Gregorius said that PVA is still looking at possibly acquiring a larger space—specifically, the Porter Building in downtown Watsonville. She said that such a move would make a “huge difference” for the organization.

“We’d really like to get that building—the additional potential it would provide would be amazing,” she said.

“Take Aways: Art To Go!” will run through March 6. PVA will hold a closing reception that day between 2-4pm. The gallery is open Wednesday-Sunday 11am-4pm.

Face masks are required to be worn inside.