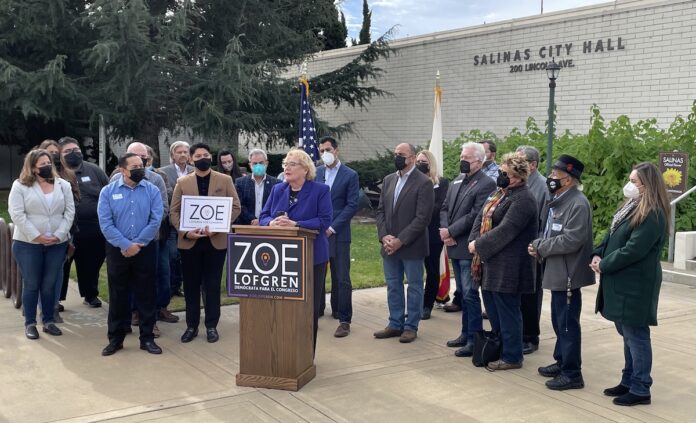 As the decennial redistricting process wrapped up last month, the concern from The World’s Salad Bowl started to mount. Local politicians, regional business giants and other community leaders asked how a plan to pair the international agricultural hub with the Silicon Valley could stand.

Now, some three weeks after the California Citizen’s Redistricting Commission solidified its new state and federal district lines, veteran Congresswoman Zoe Lofgren is tasked with convincing the Salinas, Pajaro and San Juan valleys that the pairing can indeed work in their favor.

Lofgren, a San Jose representative who has been in Congress since 1994, took her first step in trying to accomplish that task on Jan. 15. She met with local politicians from across the region in Salinas and secured two key endorsements from Congressman Jimmy Panetta and Assemblymember Robert Rivas, whose team organized the press conference.

It will be a massive shift for Lofgren, who started her career in politics on the board of San Jose City College before moving up to the Santa Clara County Board of Supervisors. Though she called the new district “unusual,” Lofgren said that she is not completely unfamiliar with the area, as she’s worked on immigration reform with people in the agriculture industry over the years.

But, she admitted, “the voters here don’t know me yet.”

“So I need to introduce myself,” she said. “And I don’t know them yet, so I’m here listening and learning. But it’s kind of exciting.”

Every decade following the release of census data, jurisdictions must adjust their district lines to account for possible shifts in population from one area to another. This is done to ensure that all elected districts remain as fairly represented as possible in government and communities of interest—a group of residents with a common set of concerns that may be affected by legislation—are protected.

While most cities and counties throughout the state leave the local redistricting process up to their elected leaders, the national and state offices—Congress and State Senate and Assembly—are determined by a 14-member committee of five Republicans, five Democrats and four people not affiliated with either of those two parties selected to the commission.

The most controversial shift in the Tri-County area—San Benito, Monterey and Santa Cruz counties—came in the Congressional maps. Monterey County for the first time was split between Congressional districts, moving the coastal communities away from the cities in the Salinas Valley. Dozens asked the committee to rethink the decision, but the group approved the final configuration late last month.

Though the decision to slice Monterey County in half garnered concern, Assemblymember Rivas says that there is a silver lining to the move: the new 18th District will be a Latino majority district.

“That means our voices, the issues and values that we all care about, are going to be heard at the highest levels of government,” said Rivas, who grew up in farmworker housing in Paicines, a small town in San Benito County. “I fought very hard with my colleagues in the state legislature to encourage Gov. [Gavin] Newsom to appoint the first-ever Latino to the U.S. Senate, which is Alex Padilla, and he did so. To see that moment, how it translated to having that representation in the U.S. Senate, it was historic. And this is the same. This is an opportunity for our communities to rise up and make sure our voices are heard.”

Rivas said that he considered running for the new 18th Congressional seat, but determined that he still had work to complete in the State Assembly. First elected to the 30th Assembly District in 2018, Rivas will run for reelection in the new 19th Assembly District that will oversee Gilroy, San Benito County and the Salinas and Pajaro valleys.

“But I’m excited about what the future holds and this is certainly an opportunity that I’m going to consider later on,” he said.

Lofgren said that she hopes to visit every community in the new 18th District when the current surge in Covid-19 cases wanes, but she has already worked the campaign trail despite the limited travel. Along with Rivas and Panetta’s nod, she has received the endorsement of national Democratic leaders Nancy Pelosi and Senator Padilla.

But questions still remain about how Lofgren, or any candidate from Silicon Valley, can adequately represent the Tri-County area.

Panetta, however, said Lofgren understands how to accomplish tasks in the legislature, and highlighted her work with the Farmworker Modernization Act of 2021, a result of a nine-month bipartisan effort that, if approved by the Senate, would revise the H-2A visa program and provide undocumented farmworkers with a path to citizenship, among other things.

“As the chairwoman of the immigration subcommittee she did it the right way,” said Panetta, who is running for reelection in the new 18th Congressional District. “She brought everyone to the table: farmworkers, farmers, Democrats and, yes, she brought Republicans … There’s a lot more to be done on immigration, but if anyone’s going to do it, it’s going to be Zoe Lofgren.”

Lofgren says that during her early interactions with local politicians she has found issues that are specific to the region. Improving access to broadband in the rural areas of the valleys, for example, is a common issue that most have relayed to her team.

But there are other issues that have been brought to her attention that can be traced back to Silicon Valley. That includes, perhaps most importantly, housing affordability.

“We’ve got to address that and I think the failure to address that in Santa Clara County is very much spiling over to this region,” Lofgren said. “The City of San Jose is very busily approving dense housing in the downtown core … but we’re behind and other [communities], it’s not just South of Santa Clara County, but also Tracy and out in the Central Valley, are being impacted by the lack of housing for our workforce.”

Next ArticleOmicron Is in Retreat