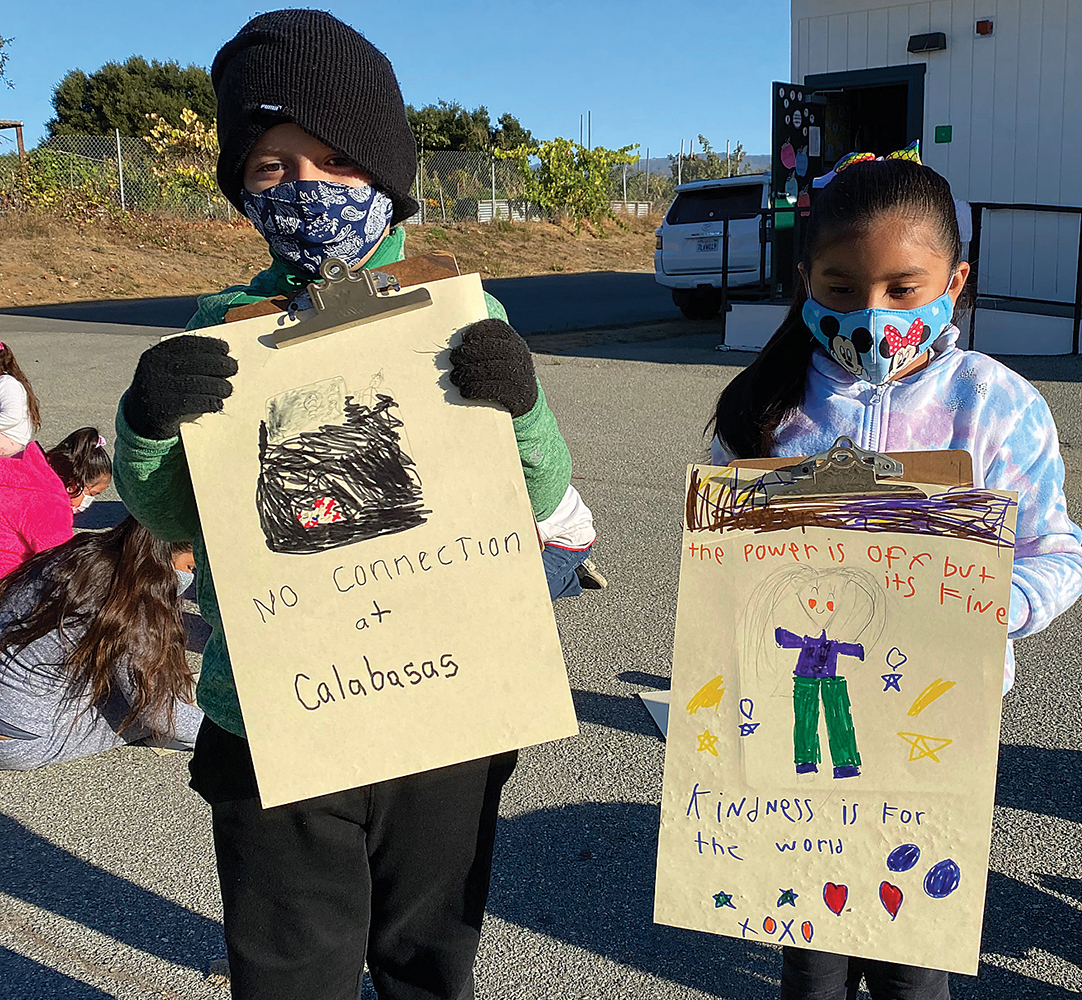 WATSONVILLE—Calabasas and Bradley elementary schools have since the beginning of the school year been beset by at least six power outages—some lasting for hours—that disrupt students’ academic day and make technology-dependent lessons all but impossible.

Worse, the loss of power means that the ventilation systems upgraded and installed by Pajaro Valley Unified School District to circulate air and help keep students and staff safe from Covid-19 are non-operational.

Pacific Gas & Electric, the utility that owns and maintains the power grid, says that the outages happen because the company in an effort to mitigate wildfire risks has implemented “Enhanced Powerline Safety Settings” (EPSS). This system automatically turns off the power when anything comes into contact with the wires, such as trees, tree limbs or debris striking equipment, as well as animal contact and issues with the equipment.

When this happens, a technician must come to inspect the lines.

“We recognize the hardship this causes our customers and are making a number of improvements that will lessen the impact of EPSS,” said PG&E spokeswoman Mayra Tostado.

The utility is working to adjust that system so that only the area directly impacted by the fault is turned off, Tostado says. This has occurred in 70% of the EPSS lines.

Tostado says that the EPSS system has led to a 60% decrease in potential ignitions that could have resulted in catastrophic wildfires, as compared to the same time period last year.

“These adjustments and improvements are helping keep our customers and communities safe by reducing the potential for catastrophic wildfire,” Tostado says.

But they have also produced numerous power outages across the rural South County region and in the Santa Cruz Mountains in North County. In presentations last month, representatives from the utility said the outages were “not acceptable,” but failed to offer any concrete solutions to the issue and said PG&E would not compensate ratepayers for financial hardships caused by power outages. It received criticism from County Supervisors Bruce McPherson and Zach Friend for not having a “direct dialogue with customers” and instead simply reading off a shortlist of submitted questions.

Tostado says that PG&E has contacted the schools to discuss ways to support them.

But Calabasas fourth-grade teacher Rebeckah Berryman is dubious about the utility’s claims.

“They’ve known there are issues for years with what’s going on, but this is not a brand new issue,” she said. “It seems to me like there is not an action plan happening to prevent this.

“I hope they can do something because this doesn’t feel sustainable.”

Berryman says that she opened the windows to allow airflow, despite the 52-degree weather. The challenges presented, she says, are an especially bitter pill to swallow after months of distance-learning isolation.

“These kids have dealt with a lot in the last year and a half,” she said. “There is so much loss of learning and stability and normalcy. The more this happens—that they come to school and there is no food and electricity and consistency—all those things that kids depend on and thrive on and that have been missing for so long, it just delays the transition back to them feeling safe and comfortable.”

But those systems only work for 10-15 hours, he said, meaning that a power outage that occurs at night could drain the batteries before school begins in the morning.

Rucker says the district is looking for ways to install such a system at Bradley, where multiple teachers have said that there has been little to no support from the district office.

He added that the schools have wireless hotspots for internet access and backup lights for bathrooms and classrooms.

Rucker also said that the district is hoping to utilize the solar panels at Bradley to help lessen the problem.

But a long-term solution, Rucker says, is in the hands of PG&E.

“What we would like to see as a school district is for PG&E to address this issue and make sure that schools aren’t going out for such an extended period of time,” he said. “We’re doing everything we can to keep our students and staff safe.”

In addition, the use of technology—which increasingly makes up the bulk of many lesson plans—is put on hold or canceled.

“When the power goes out we’re expected to carry on like normal, but you’re also trying to engage and entertain 24 to 36 students, and all of a sudden on the flip of a dime your lesson plan is turned upside down because what you carefully thought is no longer viable,” Simon said.