.Reading to Dogs and Other Local Ways to Help the Animals 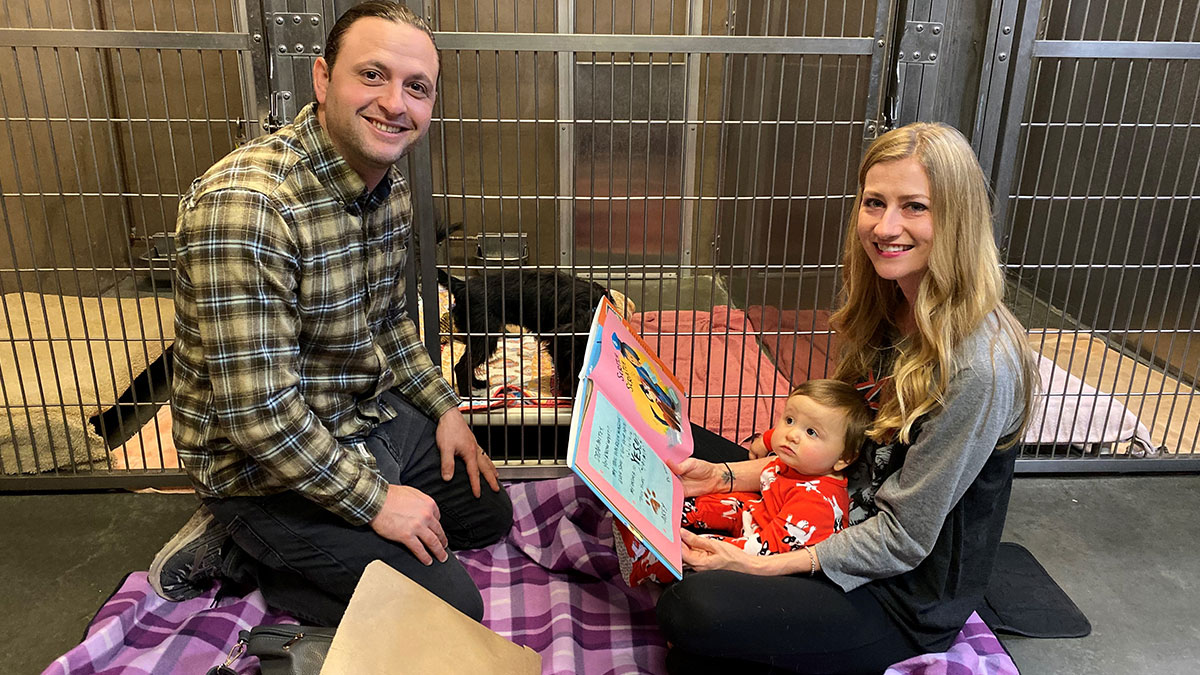 In the center of a room in the Santa Cruz County Animal Shelter, 11-year-old Scarlett Rider is reading The Famous Nini: A Mostly True Story of How a Plain White Cat Became a Star to four kittens.

“They need inspiration to become great cats,” she explains. Partway through the book, she yells, “I want to adopt one, mom!”

Her mother, Katie Rider, is sitting at a table not far behind her. “I want to bring one home myself,” she whispers, as if she doesn’t want her daughter to know she’s been tempted. So far, her will has held up. She brought her family on a whim Saturday evening after reading about the “Bedtime Stories for Shelter Pets” event at the organization’s Live Oak shelter. But she’s impressed.

“They seem to be listening to her,” she says.

In another room, young couple Holly and Jason Zappala sit on the floor in front of a row of kennels against the wall. Their 9-month-old daughter Oakley is on Holly’s lap in her pajamas (as many of the kids in attendance are) as Holly reads Can I Be Your Dog? to Olive, a black Schnauzer who watches them intently. Oakley reciprocates by reaching a tiny hand out toward Olive’s kennel.

“She loves dogs,” says Holly. “We have three rescue dogs at home, and 11 rescue chickens.”

The Zappalas are there to support the shelter, and they’re happy to have something they can bring their daughter to. “We just want to get her involved in animal rescue at an early age,” says Holly. “I can’t wait ’til she’s old enough to start going to some of their summer camps.”

This is exactly the kind of community the shelter organization seeks to build with these “bedtime stories” events, which continue every Saturday from 5:45 to 6:15pm through Dec. 28. They were conceived by the Animal Shelter’s Program and Development Director Erika Anderson, who was looking for a way to bring new donors—and especially new young donors—to the group (through the Santa Cruz County Animal Shelter Foundation) as it participates in Santa Cruz Gives this year. Each family that comes in to read gets a bookmark declaring, “I Read to a Shelter Pet at the Santa Cruz County Animal Shelter,” plus a postcard explaining how to donate to the group through Santa Cruz Gives. The card also explains how the funds raised through Santa Cruz Gives will go to support the group’s “Animobile,” which will help them transport animals from remote locations around the county to and from the shelter for spay- and- neuter services, and expand their free “Healthy Pets for All” pop-up clinics.

“I was just at one on Wednesday in Watsonville,” says Anderson. “We served 52 pets and signed up 19 free spay- and- neuter appointments at our shelter. We set up in the Veterans Memorial Hall with a volunteer vet team—free exams, vaccinations, flea-and-tick medication. We had pet beds donated by PetSmart. We had a bunch of dog and cat food donated by PetPals. We were giving it all away for free.”

Even Anderson seems a little shocked at the effect the bedtime stories are having at the shelter, especially around the dog kennels. “People are crying,” she says of the volunteers who are guiding families through the event. “For a lot of the staff, it’s because of how calm the dogs are right now.”

CUDDLING FOR A CAUSE

The Santa Cruz County SPCA is another animal welfare group trying something innovative to encourage donations through Santa Cruz Gives this holiday season. The group is hosting a series of “pop-up cuddle booths” around the county, and just did their first one on Saturday at Home/Work (future booths will be announced 48 hours in advance on the Santa Cruz County SPCA Facebook page).

The unique human-animal love connection is an important part of the project Santa Cruz Gives donors can fund for the group. Their “Support for Seniors” program has two main components. First, it provides veterinary care to the animal companions of low-income seniors.

“A lot of times, we’re helping them stay with their pet,” says Alison “Ali” Talley, the local SCCSPCA’s executive director. “We’re preventing their animals from being surrendered to a shelter situation.”

The second element of “Support for Seniors” connects senior people with senior pets, covering the costs of adoption, vaccinations, spay/neuter and microchipping.

Mandi Hart, the group’s shelter manager, says they’ve seen adopted animals do as much for their senior caretakers as the other way around. “The pet can end up being the reason the person gets up in the morning,” says Hart. “It’s the lifeline.”

The senior program was originally established by a gift from renowned botanist and UCSC pProfessor eEmerita Dr. Jean Langenheim, who also contributed a $1,500 challenge gift to the group’s Santa Cruz Gives campaign this year.

The staff and volunteers at Unchained know a lot about what humans and animals can do for each other. In their ongoing program, Canines Teaching Compassion, young people—many of whom come from the juvenile hall system—are matched with a shelter dog that they are taught how to train for eight weeks. Santa Cruz Gives donations to the group will help fund a new “Dogs in Residence” program they hope to establish next year, which will allow teams of youth to provide foster care and training for rescue dogs.

Melissa Wolf, the founder and president of Unchained, says that in using positive learning techniques to train dogs that may not have experienced such a caring dynamic before, the young people in the program receive the same kind of unconditional love. “The dogs are immediately accepting of the kids,” says Wolf. “They don’t judge them for their background or previous behavior. The dogs come from perhaps a life of neglect or abuse, and that’s the case with some of our kids, too. They see themselves in their dog.”

Teaching and spreading empathy has never been more important in the animal-welfare community, she says.

“I think what animal rescue is seeing right now—and this is what we were born out of—is if you’re going to change the plight of animals, you have to start with people,” says King.

“Research has shown a direct tie-in,” says Anderson. “How we treat animals reflects how we treat people.”

Donate to all of these animal-welfare groups at santacruzgives.org.

Next ArticleDoes Supervisor Zach Friend Talk Too Much Trash?