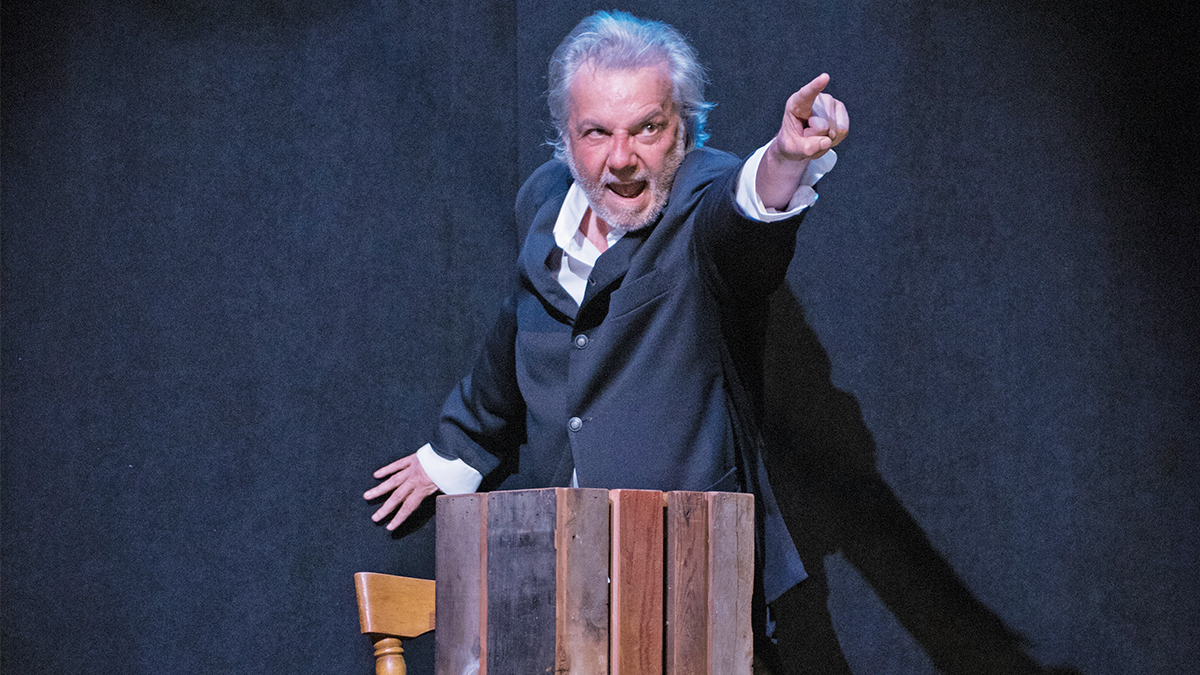 No matter how many versions of A Christmas Carol you’ve seen—and I’ve seen plenty—the new Jewel Theatre Company production Scrooge: The Haunting of Ebenezer will be something completely different.

It’s adapted and performed as a one-man show by Jeff Garrett, in which the dauntless Garrett enacts 31 characters out of the beloved Charles Dickens classic. Garrett delivers a Herculean solo performance playing all the parts—from Scrooge to Marley’s Ghost to Mrs. Fezziwig to Tiny Tim—in a show that’s as much a celebration of the acting craft as it is about the Yuletide season.

This is also the first ever holiday show to be mounted by JTC, now in its 13th season, and embarking on its third year in the Colligan Theater at the Tannery. With only nine scheduled performances over a seven-day period, it’s a brisk injection of holiday spirit right when we need it the most.

In addition to playing all the characters, Garrett also takes the role of narrator, telling us Dickens’ famous Christmas Eve tale in the author’s own words. Well, not all of them; Garrett cherry-picks his scenes, characters, and incidents, streamlining and condensing the material into a fleet 80 minutes. But this isn’t Dickens Lite; the emotional heart of the story is laser-focused throughout.

The bare set, constructed by scenic designer Steve Gerlach, contains a high stool, a chair, and a crate in front of a black curtain. A few boxes of musty, unidentifiable objects—signifying age and neglect—and a few discreet chains dangle from above. That’s it. The rest of this most colorful and atmospheric story plays out in your imagination, prompted by Garrett’s vivid, con brio performance. From the moment he first comes onstage, roaring like a banshee in keeping with the spirit of the ghost story to come, his energy and enthusiasm never flag.

Dickens’ own narrative voice, delivered by Garrett with quiet authority, dominates the early scenes, proclaiming Scrooge a “greedy, covetous old sinner,” and describing the poignant image of clerk Bob Cratchit trying to warm himself by his single candle flame. Garrett plays Scrooge himself close to the chest — literally. Hunched protectively over his accounting book, applying his laborious scrawl, he can barely be bothered to raise his head and spit out a crotchety “Humbug!”

It’s not until buoyant nephew Fred appears, determined to wish his sour uncle a “Merry Christmas,” whether he likes it or not, that Garrett starts to work his real magic. As uncle and nephew debate the merits of the season, Garrett glides so deftly back and forth between the two opposing viewpoints and temperaments that viewers might, in retrospect, convince themselves they’d been watching two separate actors.

This sets the tone for all of Scrooge’s encounters, as he grows more towering in his meanness and disdain, then gradually more remorseful as the incidents of his misspent life come back to haunt him. Garrett makes a particularly spooky Marley’s Ghost, Scrooge’s former business partner, and the first of his otherworldly visitors, wailing his dire warning about the consequences of Scrooge’s miserly ways.

As the Spirits of Christmases Past, Present and Future take Scrooge on a tour of his life, it’s fun to watch Garrett play all the characters—from shy little Tiny Tim singing a folk ballad, to the entire guest list at the Fezziwigs’ ball, complete with dancing! (I also liked that Garrett plays the jolly Christmas Present as a sort of slightly soused Falstaff.) And the ending, where Scrooge rediscovers his humanity, along with his own Christmas spirit, is played with merry gusto.

In such a minimalist, bare-bones production, stage effects are extra important. Mark Hopkins’ lighting design is subtle and sparing, but wielded with precision for maximum impact. The string of tiny, ice-blue lights that (barely) illuminates Scrooge’s cold counting-house transforms into garlands of festive red and green for the Fezziwigs’ ball, or the Cratchits’ boisterous Christmas Day.

Spotlights of various colors and temperatures isolate Garrett on stage in key dramatic moments, like when he gazes up in awe at the warm, rosy glow beaming down from Christmas Present. Audio is also used to tremendous effect in Gerlach’s sound design—especially the nerve-jangling doorbells and clanking chains when Marley’s Ghost appears, and the deep, clamorous church bells that announce the arrival of each successive Spirit.

What I love about the novel is the economy of its storytelling, well-served in this unadorned, yet effective production. It only plays through next Sunday, so catch it quick, before it disappears like the foam off a glass of Smoking Bishop.

The Jewel Theatre Company production of ‘Scrooge’ plays through Dec. 17 at the Colligan Theater at the Tannery. 425-7506, jeweltheatre.net.

Previous ArticlePreview: The New Up to Play Crepe Place