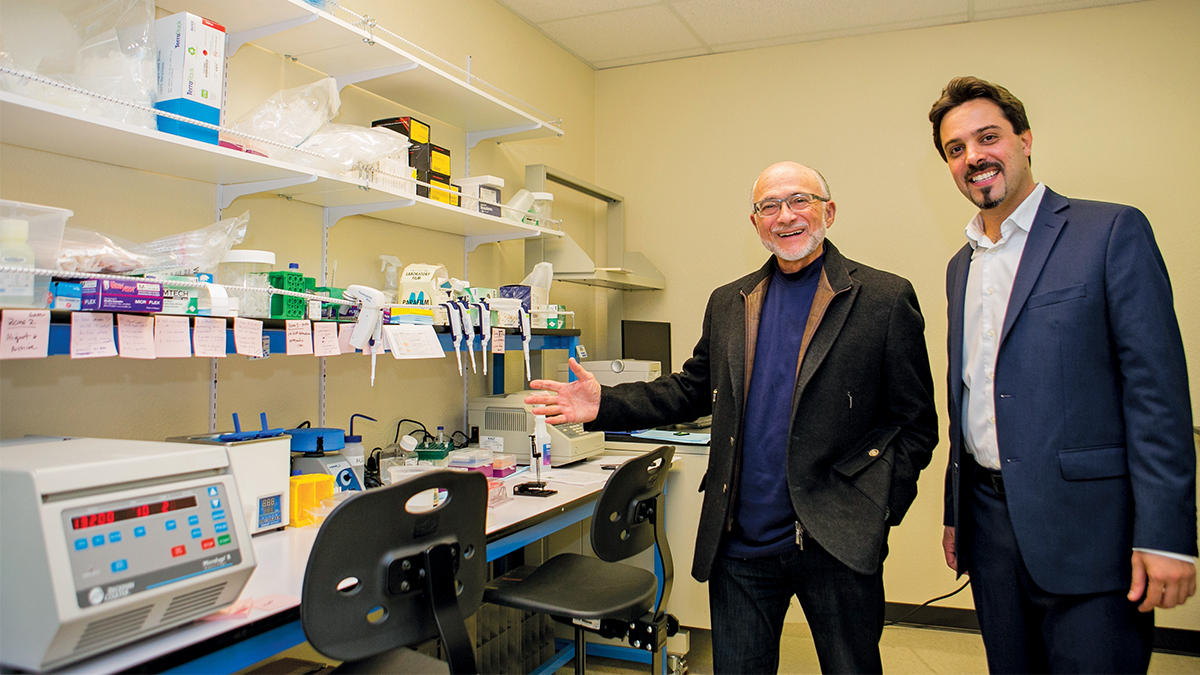 Three weeks ago, Josh Schwochert and Cameron Pye were working on their startup out of garages and coffee shops.

The two recent chemistry graduates from UCSC’s doctoral program were living the startup life—rubbing elbows at mixers in search of connections, pitching potential investors and working wherever Wifi was available. At coffee shops, Schwochert would answer his cell phone and say he was in his office, eliciting laughter from the baristas.

Now, they’ve moved into a cubicle at Startup Sandbox, an incubator space on Santa Cruz’s Westside. Less than a year old, Sandbox is a nonprofit funded by the university, geared toward recruiting biotech companies in Santa Cruz and across the greater Monterey Bay region.

Incubators and accelerators like this one aren’t a new concept. Silicon Valley is full of programs geared toward helping startups create business plans, develop products and pitch to investors.

This incubator is a $700,000 initiative funded via UCSC, through a new state law. California lawmakers passed the bill AB 2664 in the fall of 2016, injecting $22 million into the 10 University of California campuses, in the hopes of spurring innovation and entrepreneurship. Each campus received $2.2 million to use at their discretion. UCSC opted to spread the funds across several areas through a program called SPLICE—Support Program for Long-term Innovation, Commercialization & Entrepreneurship.

The SPLICE plan includes seven components, including an entrepreneurial student program, grants to commercialize products and the Sandbox incubator. UCSC administrators have aimed the approach at complementing research already underway at the university—dating back to a foundation that UCSC researcher David Haussler and his team first laid when they published the first-ever map of the human genome sequence in 2000.

The Sandbox rents out space to potential companies, while providing them the infrastructure to do their research and expand.

The 13,500-square-foot two-story building off Natural Bridges Drives is still, for the most part, empty. The space will feature a testing “wet lab” (where chemicals and other volatile liquids can be handled) that’s expected to be finished by the spring. A temporary lab space on the second floor, meanwhile, is already fully occupied. Cubicles are built along many walls to make mini-offices. Some are adorned with placards of the companies already in the space.

Schwochert and Pye both say Sandbox’s presence helped motivate them to launch their company, Unnatural Products, a biopharmaceutical company and one of six startups growing out of the incubator program.

“It’s really great that there’s something in Santa Cruz and it’s kind of getting a reputation,” Pye says. “It helps us kind of defend our choice to stay in Santa Cruz because there is this growing biotech scene.”

Lou Pambianco and Judy Owen at the incubator both say the Sandbox will grow as word gets out. Pambianco, president of the company’s board, and Owen, its chair, are regular faces at the program, as they help lead it.

Between the two of them are decades of experience working for, building and managing Silicon Valley companies and startups. Owen is an electrical engineer who started at Intel in the 1970s. Pambianco has a background in consulting with tech companies on bringing products to market. They admit they don’t have biotech backgrounds, but say they don’t necessarily need it to make the Sandbox successful.

“We analyze the market and figure out how to attack it,” Owen says.

Owen, Pambianco and experts from the university all share a vision—one of biotech students graduating out of the school to work for startups under the Sandbox’s roof. Better yet, they want the students to come ready to start their companies, eventually creating a boom in the region. “I do think this has the potential, in a couple of years, to create several companies that employ hundreds of people,” Owen says.

He isn’t the only one seeing that potential. The space has begun impressing university faculty and local biotech executives.

Richard Green is a UCSC professor of bioengineering and founder of Dovetail Genomics on the Westside of Santa Cruz. When Dovetail started, it was based out of the university, but Green says they had to pester the university for incubator space. The university granted him space on campus, but Green wasn’t happy with the price or set up, saying the company moved off campus as quickly as possible.

With the Sandbox in place, untried companies get a space to experiment and potentially grow.

“It’s an absolutely beautiful lifeline that they’re throwing down to people who are trying to make this very hard decision,” he says. “It lowers the barrier of entry, which is a great thing.”

The idea of a startup often elicits images of programmers and entrepreneurs clicking away on keyboards in their living rooms.

But the biotech startup sphere’s barrier to entry is much higher than other industries, like designing websites or building apps. Fledgling companies would typically need a zoned lab space to do work, industrial refrigerators to store samples and access to expensive equipment.

That space isn’t hard to come by over the hill, but the cost is prohibitive, says Nader Pourmand, an associate professor of biomolecular engineering at UCSC who cofounded the startup Pinpoint Science out of San Francisco.

“The problem for startups in general at the size of my company is that most places, you have to sign a long-term lease. Looking at financials, startups don’t have that many assets. So, it’s really hard to get into any good space,” Pourmand says.

On a recent Thursday, UCSC’s Office of Research—the department tasked with overseeing SPLICE initiatives—held an open house. The normally quiet office building buzzed with conversation, as board members from companies mingled with faculty from the university, exchanging business cards.

Sandbox leaders were eager to show the space to faculty members and potential tenants, letting them know that the space is available.

Andrea Pesce from the Office of Research broke down the university’s investment into the Sandbox along with six other entrepreneurial initiatives.

“The university recognizes that innovation and entrepreneurship are important,” Pesce says. “The SPLICE program really demonstrates their commitment to that.”