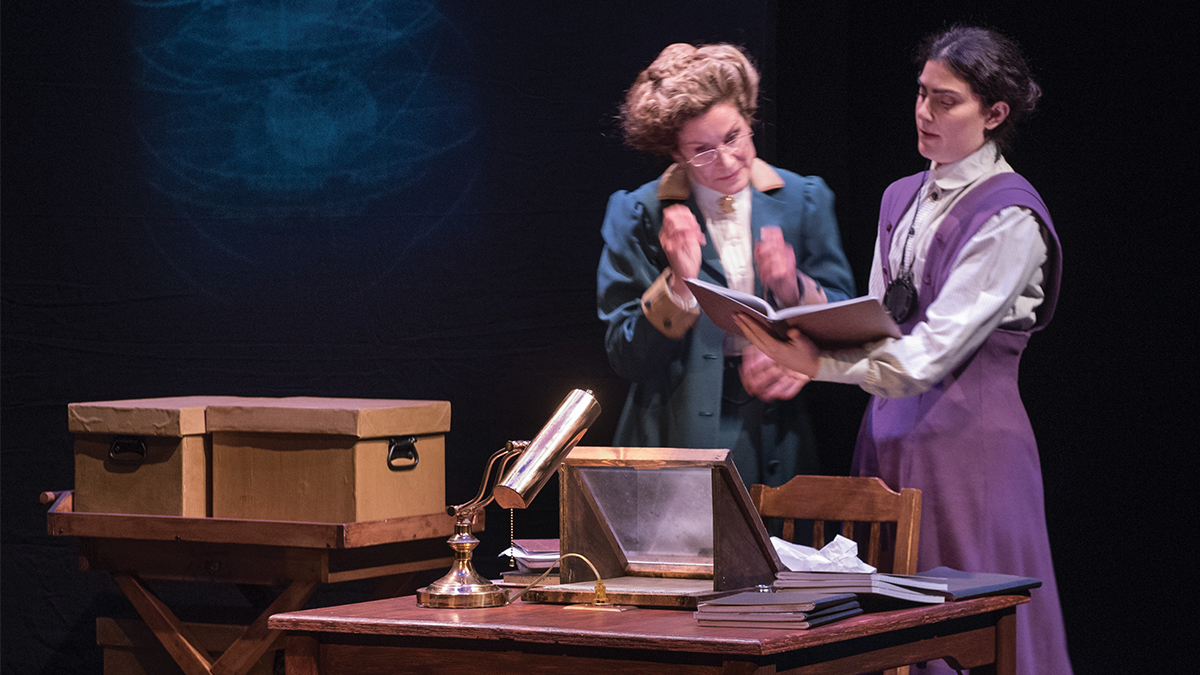 [dropcap]A[/dropcap]ccording to an old Chinese proverb, “Women hold up half the sky.” You couldn’t dream up a better tagline for the lyrical play Silent Sky, the new production from the Jewel Theatre Company, in which women at the turn of the last century defy traditional domestic female roles to join the team of astronomers at Harvard in the work of mapping the stars. Sort of a prequel to the movie Hidden Figures, it’s a tale of unsung heroines finally getting their props, beautifully told in this exhilarating production.

First produced in 2011, Silent Sky was written by prolific American playwright Lauren Gunderson. She structures her play around real-life astronomer Henrietta Leavitt, who had a knack for mathematics and a deep hunger to know the vastness of the world, and the place of humanity within it. Gunderson charts Henrietta’s personal course through sexism and ridicule in an extraordinary age that produced the theories of Einstein and the rise of the suffragist movement, touchpoints conveyed with wit and grace by director Susan Myer Silton in the JTC production.

The story begins in Wisconsin, circa 1900, where the Leavitt family resides. Supported by her minister father, Henrietta (a vivid performance by Michelle Drexler) has graduated from Radcliffe. She accepts an offer from Harvard to work as a “computer” (filing and recording data) at the school’s famed observatory—even though it means leaving behind her beloved (if often disapproving) sister, Margaret (Marissa Keltie). “You know I’m just going to get more annoying unless I go,” Henrietta reasons with her.

But her dream job comes with some caveats. The female computers working for observatory director Edward Pickering, called his “harem,” are like glorified secretaries, cataloging the photographic glass plate images from the telescope they are never allowed to touch. Working on their own research projects is forbidden, yet Henrietta loves the camaraderie of her colleagues, the at-first daunting, but fiercely supportive Annie Cannon (played with authority by Marcia Pizzo), and droll Scotswoman Williamina Fleming (Diana Torres Koss, in another entertaining turn).

Despite a hearing disability, Henrietta pioneers a theory in star luminosity as a way to measure its distance from Earth and find out how vast the universe really is. The joy of her discovery (which influenced Edwin Hubble, among others) is weighed against her tentative romance with male colleague, Peter Shaw (an eager Aaron Wilton). Shaw, like sister Margaret—who stays home to marry and raise a family—are the play’s only fictional characters, introduced to illustrate what these groundbreaking women stand to lose in pursuit of their work.

The production looks terrific. Scenic and Media Designer Steven Gerlach uses projected images and multiple revolving scrims  to great effect, whether suggesting snowfall or ocean waves, and especially when he bathes the stage in revolving star fields. The right side of the stage represents Henrietta’s roots, with its images of family life and Margaret’s piano; the left side is the observatory, decorated with charts and graphs, where the women at their adjoining desks share the excitement of their work, the enormous telescope ever looming in the background.

The elevated upstage bridge between the two is used to highlight key moments in the drama. This is where Henrietta first appears, goddess-like, floating in a vast sea of stars in the play’s breathtaking opening moments.

Modern contributes handsome period costumes, the women in suits and skirts as functional as corsets and petticoats will allow. And since all of the women scientists in the play are historical personages, it’s a nice touch that the video playing in the lobby features photographs of the real Henrietta, Annie, and Williamina. Check it out while pondering this inspiring story of mapping out a life by charting the stars.

The Jewel Theatre Company production of ‘Silent Sky’ plays through Feb. 18 at the Colligan Theater in the Tannery Arts Center. Call 425-7506, or visit jeweltheatre.net.

Next ArticleSanta Cruz County vs. Monterey County: Who Ya Got?