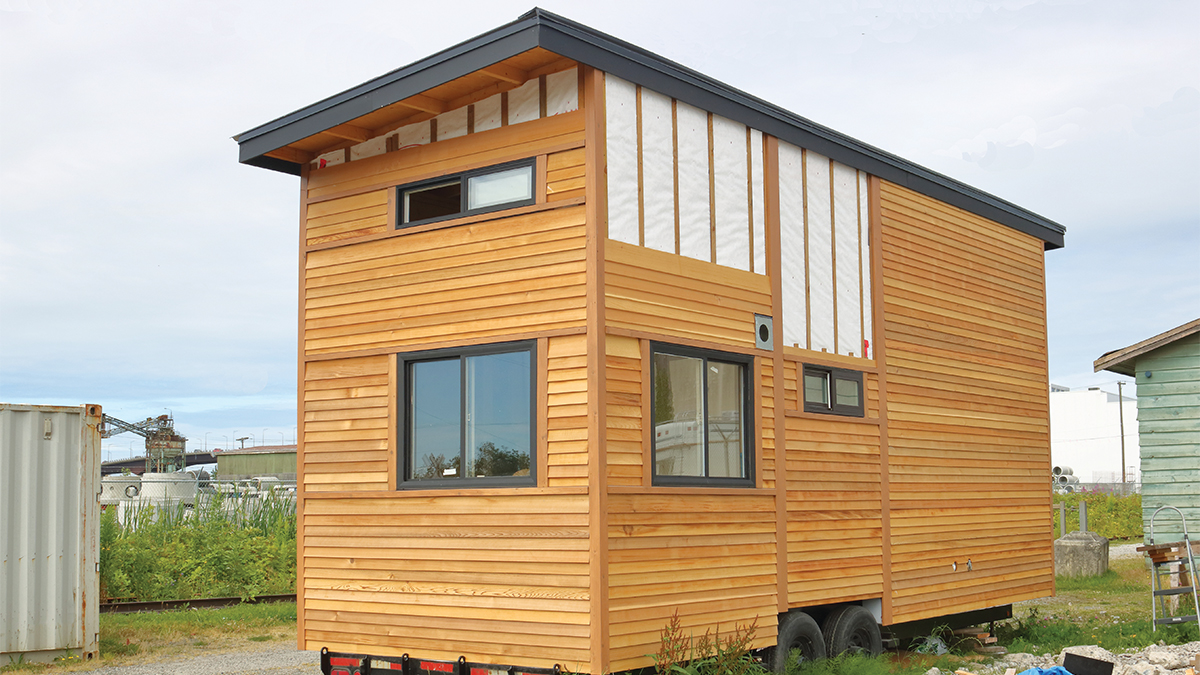 [dropcap]R[/dropcap]ayne Marr, the county’s homeless services coordinator, says several people have approached her with similar versions of the same big idea—how tiny homes could work as a transitional “bridge” that house Santa Cruz’s most needy. But Marr describes a pushback from local planning and building officials, who insist that state requirements prevent them from approving any such project, even though other California cities and counties have found ways to do it.

“Every time I even mentioned tiny homes or a tiny home village, I was told it can’t be done due to state law,” Marr says. Nonetheless, back in November, the Santa Cruz County Board of Supervisors received a homelessness report from Marr that touched on a successful tiny home village for the homeless in Yuba County called 14 Forward. That prompted the board to direct that staff to develop a plan, in concept, for tiny home villages along those same lines, with one village planned per supervisorial district.

Cities in both California and Oregon have been getting creative with sheltering their homeless in relatively low-cost individualized shelters and villages of tiny homes, also called tiny houses or micro-shelters. But in spite of the board’s recent direction, local officials have generally shown a slow-moving reluctance to outline serious plans for a tiny home community.

Carol Berg, the housing and community development manager for the city of Santa Cruz, says that the city doesn’t have much available land for new projects. “The concept you are exploring [tiny home village] might offer a better fit in communities that are not so built out,” Berg says, via email. Julie Conway, the housing manager for the county, says officials have focused on streamlining the permit process for accessory dwelling units, also known as in-law units, in backyards. She’s also skeptical of a tiny home village, saying that “the county is also land-constrained, and finding a site for such a thing would no doubt be problematic.”

After the financial collapse of 2008, tiny homes emerged as a way to downsize and enter the world of affordable entry-level homeownership. A tiny home qualifies as what developers, planners and architects often call “affordable by design,” as each unit is only a few hundred square feet at most, and therefore requires less labor and fewer raw materials to build—not to mention the fact that it takes up less real estate. For many who bought in, the move into a tiny home also let them relinquish the need for a permanent foundation, as many tiny homes are put on trailers, like mobile homes, to allow for flexibility. But that leaves regulators scratching their heads, trying to figure out how to permit something that isn’t quite a house and yet doesn’t meet health and safety certifications for factory-built housing like camp trailers, either.

Back in 2016, the Santa Cruz City Council expressed interest in tiny home villages and asked staff to research the issues. A staff report on tiny homes presented on Oct. 11, 2016, included a three-page memo from city planner Ron Powers detailing the legal difficulties of permitting tiny homes. Certain state agencies certify mobile homes and RVs for compliance with health and safety codes, Powers explained, each with different codes and standards. And local building officials are responsible, per state law, for ensuring that tiny homes on trailers meet those certifications.

“It just seems to me it’s really a shame we can’t get this together,” says Todd Clayton, a construction contractor-turned-entrepreneur who started a business two years ago in Scotts Valley called Boxed Haus, which converts shipping containers into tiny homes.

“My homes are energy-efficient,” he says, “with sustainable, non-toxic materials and state-of-the-art finishes. I’m not trying to skirt the building codes at all, and I’m meeting and exceeding most the performance specs for heating and ventilation, but I still can’t get permits. I feel like an outlaw by trying to make a better world with a very decent product, a product people need, but can afford.”

Clayton says he submitted a proposal to Los Angeles County for homeless shelters made out of partitioned shipping containers that can be put on temporary foundations and still remain movable in the long-run. Clayton proposed four eight-by-10-foot bedrooms within 40-foot containers, and two bedrooms in every 20-foot container, with common bathrooms and kitchens in separate buildings, all of which, he thinks, combine into a winning emergency housing strategy. “And I’m still waiting to hear back,” he says.

“There is an overwhelming need for low-cost, quality housing and it seems to me, it’s just a bunch of bureaucratic red tape that lies between helping people and not helping people,” Clayton says.

Locally, there are other basic requirements that pertain to tiny homes; for example, minimum square-footage requirements. Both the city and the county rules say that the minimum size for any kind of house is 220 square feet, which is bigger than some tiny homes.

And every home—tiny or otherwise—must have a bathroom, a sleeping area of at least 70 feet and a closet. Each home in the city of Santa Cruz must have a kitchen as well. Also, current zoning rules limit how many homes a property owner can shove onto one parcel. In a neighborhood of single-family residences, for example, someone would not be able to put more than one or two tiny homes on a property.

Other jurisdictions have moved forward. Former Assemblymember Nora Campos (D-San Jose) went so far as to get a state law passed that suspended the normal state-required permitting in order to foster “emergency housing” for the homeless in San Jose. The law allows for micro-shelters without plumbing and sewage disposal, which would otherwise violate many building codes, including minimum square footage requirements.

The approval of the first tiny home village in San Jose did not happen without ire from angry homeowners, who expressed concern during a heated December City Council meeting. The San Jose City Council scaled down the original plan of building several villages to building just one, a micro-shelter village pilot project of 40 units, on a site yet to be determined. The council approved a design concept received from the Gensler architectural firm at no cost to the city, featuring futuristic-looking 80- to 140-square-foot sleeping cabins.

The San Jose City Council designated Habitat for Humanity as the project’s developer and general contractor. The units will cost San Jose between $18,000 and $30,000 per unit, with an overall cost of $2.3 million for the entire project.

Oakland and Yuba County have approved villages as well, both opting for an austere toolshed-like structure that does not include any insulation, plumbing or electricity, but comfortably accommodates two single beds. In both projects, portable restrooms and wash stations are provided. In Yuba City, a nearby Christian charity has agreed to make its shower facilities available, offer two daily meals to village residents and provide office space for case management.

Oakland’s tiny house village has opened in what was once an empty downtown lot. It features 20 units designed to house 40 people for up to six months at a time. The city has contracted a nonprofit to bring mobile shower facilities to the village once a week. The encampment will offer a variety of services and case management aimed at getting people into more permanent housing. Oakland Mayor Libby Schaaf said at a December news conference that she’s very excited about the project, adding, “Let’s be clear, this is not a permanent solution—this is a right-now intervention.”

Several miles east, Sacramento Mayor Darrell Steinberg announced last week that he wants to build 1,000 tiny homes in his city over the next two years.

In Santa Cruz, Steve Pleich, a longtime homeless advocate and member of the Emergency Shelter Working Group, is a proponent of tiny homes, both on trailers and in villages.

He says there are three major obstacles to them becoming a reality, either in the city or the county, “and those three problems are location, location, and location. It’s not about funding or homeless programing or about sanitation and building codes or even political will—it’s about where to locate them. Nobody is coming forward on where they should go.”

Pleich has worked for years on a safe-parking program for otherwise homeless individuals and families who live in cars and RVs. He supported rule changes that allowed certain public and private parking lots to be designated as safe spaces where the “vehicularly housed,” as they’re called, could park safely at night in spots monitored by a nonprofit service provider.

Pleich—who lived out of an RV for years himself—says that whether such spaces could also accommodate tiny houses on trailers “remains to be seen.” It would depend, in part, he says, on the site, because tiny homes on trailers are less mobile than RVs.

Despite the obstacles, Marr plans to keep exploring the possibility of a tiny home village for Santa Cruz County. “Until we don’t have homelessness anymore,” Marr says, “we need to keep all options on the table.”

Update 02/07/18 11:06 a.m.: A previous version of this story misquoted Todd Clayton and has been updated with correct quotes from him.