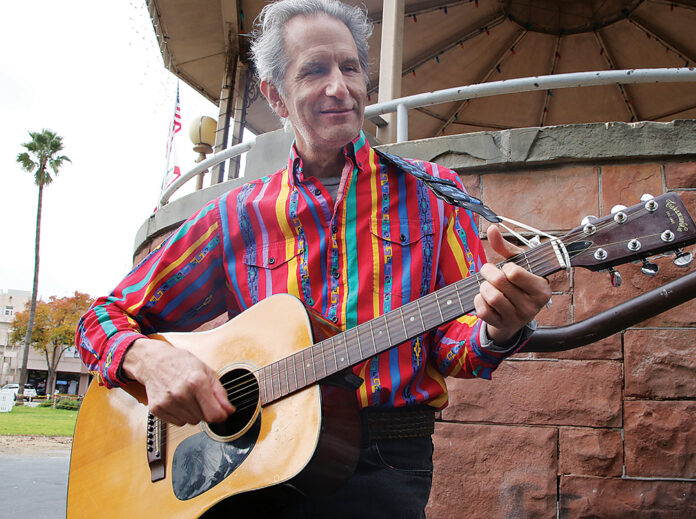 WATSONVILLE—For the first time ever, the city of Watsonville has its very own poet laureate. Longtime resident Robert Gómez will for the next two years be working to advance the literary arts throughout the Pajaro Valley.

A poet laureate is appointed by a government or other institution to represent and engage with their communities, writing original poems and going out to perform them at schools, city council meetings and more. In May 2021 the Watsonville Public Library, led by its new director Alicia Martinez and board trustee Victoria Bañales, officially launched a nomination period for the position.

The Watsonville Poet Laureate Committee was formed to review each nomination and make a selection. Bañales, chair of the committee, said in a press release that they were impressed with Gómez’s poetry and performance.

“Hearing him recite his poetry was a magical experience—his clarity, positivity, enthusiasm, emotion, passion, lyricism and powerful voice mesmerized us all,” she said. “The whole room lit up as soon as we heard him read. As one committee member put it: ‘He sings poetry.’”

The fact that Gómez, who has Mexican ancestry, is bilingual in both English and Spanish also played a role in the decision.

“[It] affords him a greater audience, democratizing poetry and restoring it to its original intent,” Bañales said. “Gómez’s poetry is a reflection of his community—it’s about building bridges across cultures, unifying people, and celebrating diversity.”

Gómez has been a resident of Watsonville since 1984. He raised his two children with his wife Denise Gómez here. He has a long record of community service and social justice advocacy, having marched with César Chávez in the 1970s and worked as a Pajaro Valley Unified School District migrant and bilingual resource teacher for 26 years. He has volunteered with Court Appointed Special Advocates (CASA) and served as a chaperone for seventh- and eighth-graders to Watsonville’s sister city, Kawakami-mura in Nagano, Japan.

In addition, Gómez has helped direct the music for the Watsonville Buddhist Temple’s Kokoro no Gakko Cultural Summer Program. He continues to visit schools and other institutions to sing songs and play guitar for students.

“Poetry and song connect,” he said. “For me, it’s the same thing. Good songs are good poems. And good poems have rhythms and currents and waves like good songs do.”

Gómez is part of Writers of Color, a group formed to sponsor and promote writers of color in Santa Cruz County. It was during a virtual meeting with the group in November that he learned he’d been chosen as poet laureate.

“It was unexpected,” he said. “There are so many great poets around here … It was definitely a surprise. I’m honored.”

Gómez has continued to publish haikus in multiple issues of the Watsonville-Santa Cruz Japanese-American Citizens League newsletters. He has also been published in El Andar (1990) for his poem “Güelcon Tu Waztlanville” and in Américas Review (1993) for “Hacia Ti.” He hopes to read one of these poems when officially awarded the title at a city council meeting on Jan. 11.

“I have a deep love for spoken word when it’s done theatrically, dramatically … when you have emotion in your voice,” he said. “It should be that way. You should have sensitivity about what you’re saying, why you’re saying it, to whom you are saying it.”

Looking ahead, Gómez says he has “all kinds of ideas” for his time as poet laureate. This includes establishing a Youth Poet Laureate program for poets 18 years old and younger and possibly working with Poetry Out Loud, a national arts education program aiming to encourage the study of poetry and spoken word in schools.

“Poetry is powerful,” Gómez said. “It can change us, move us. That is why I write—to move people. I am really looking forward to the next two years.”

Previous ArticleAs Omicron Spreads, Officials Ponder What It Means to Be ‘Fully Vaccinated’

Next ArticleAnother Tough Day for Air Travel, With More Than 1,100 U.S. Cancellations