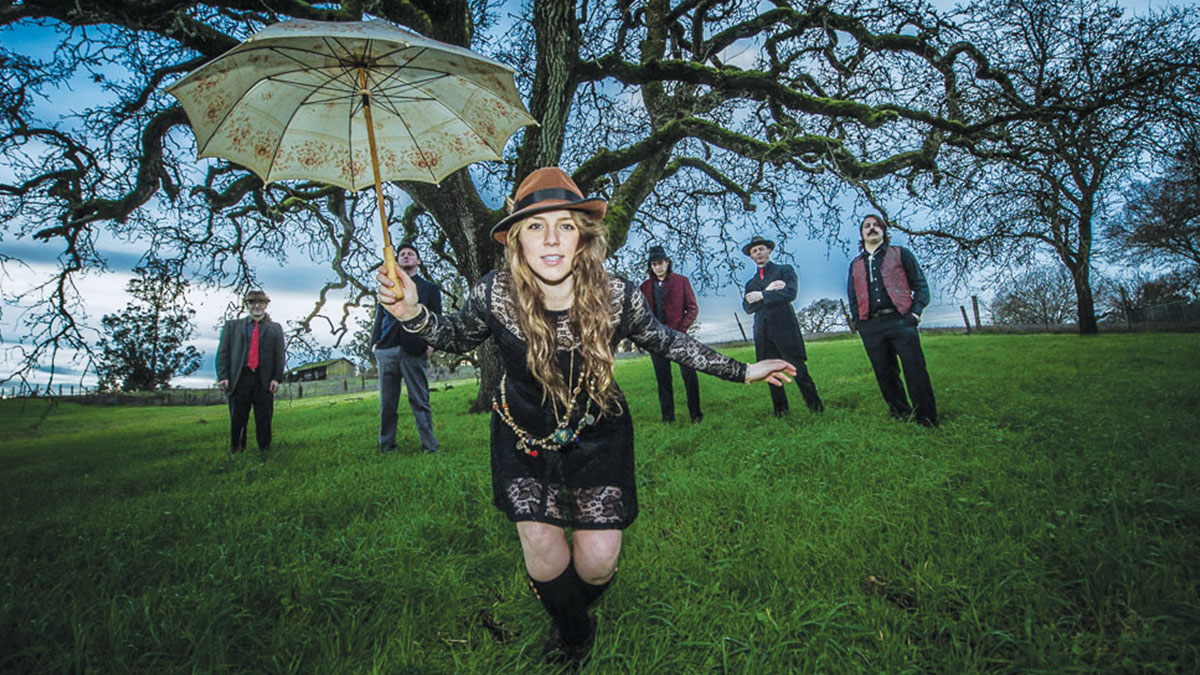 Before Lauren Bjelde became the charismatic frontwoman for the horn-powered six-piece soul combo Royal Jelly Jive, she had been holding down a monthly gig for a year at San Francisco’s Boom Boom Room with a psychedelic blues/funk project. An elemental Delta boogie seeped into the music, manifesting the spectral presence of blues legend John Lee Hooker, who once owned and operated the club.

Royal Jelly Jive’s story starts right after this, in late 2013, when Bjelde, keyboardist Jesse Adams and a few other members launched the band under its new name, delivering an uproarious blend of slinky R&B brass, surging organ and keen melodic hooks, still leaving room for the blues that served as their foundation. The group started hitting the Boom Boom Room hard, and quickly emerged as one of San Francisco’s most entertaining bands.

“When Jesse Adams came into the picture, he took us to a new level of funk with the B-3, bringing that John Lee Hooker juju,” says Bjelde. “We had the vibes spilling over from the Fillmore, and it all went into our sound.” Additionally, the band features Robby Elfman on reeds, trumpeter Danny Cao, acoustic bassist Tyden Binsted, and drummer Felix Macnee.

These days, Bjelde concentrates more on singing than on guitar, a move she attributes to her increasing comfort on stage. It’s added a new layer of liberation to the music. “I’ve gotten more into physically embodying the music,” she says. “I tend to dance and not play instruments on stage, and I miss that. Moe’s Alley is a place I can pull out the guitar. I think I took my favorite guitar solo ever shredding at Moe’s.”

The group is releasing its third CD, Limited Preserve No. 3, accompanied by “a whole bunch of jelly being jarred. This is a harvest and assemblage of our studio experience,” Bjelde says, referring to the album, not the preserves.

“We been spending so much time as a band on stage night after night, so much music pours out. There’s no rhyme or reason or official recipe as to who writes the songs. It’s about what feels good. Jesse and I are together all the time, and a lot of that songwriting comes together working feverishly on the boogie.”

Bjelde grew up in the Central Valley in small town outside of Modesto, the youngest of four siblings. She loved music as a child but isn’t the kind of performer who spent her life dreaming of the spotlight. Before Royal Jelly Jive came together, she was studying Islamic art and architecture in Turkey, and trained as an underwater archeologist (scuba diving is something of a family tradition). She was also a member of the CIA, “which stands for Conceptual/Information Arts,” she says, referring to author, artist and professor Stephen Wilson’s innovative San Francisco State program exploring the cultural implications of new technologies.

Bjelde was immersed in the program when it fell apart after Wilson’s death in 2011, but she spent fruitful months “taking apart pianos and putting them together in poetic ways,” she recalls. “We’d use electronics and metal fabrications and create these interactive poems that would react to the person who was looking at it.”

With her SF State adventure coming to an end, the Boom Boom Room started exerting a powerful pull. Music had long been a more private pursuit. “I should have known,” she says. “Every memory I have I was singing, whether I was lulling myself to sleep or on the bus, music was part of it.”

All of her various interests come into play with Royal Jelly Jive, a band that embodies San Francisco at its best. Deeply informed and playfully reverent toward the departed masters whose shoulders they stand on, the band brings its far-flung curiosity to the stage.

“The more and more we travel, we realize how much we’re a San Francisco band,” Bjelde says. “You hear the history of the city in the lyrics.”