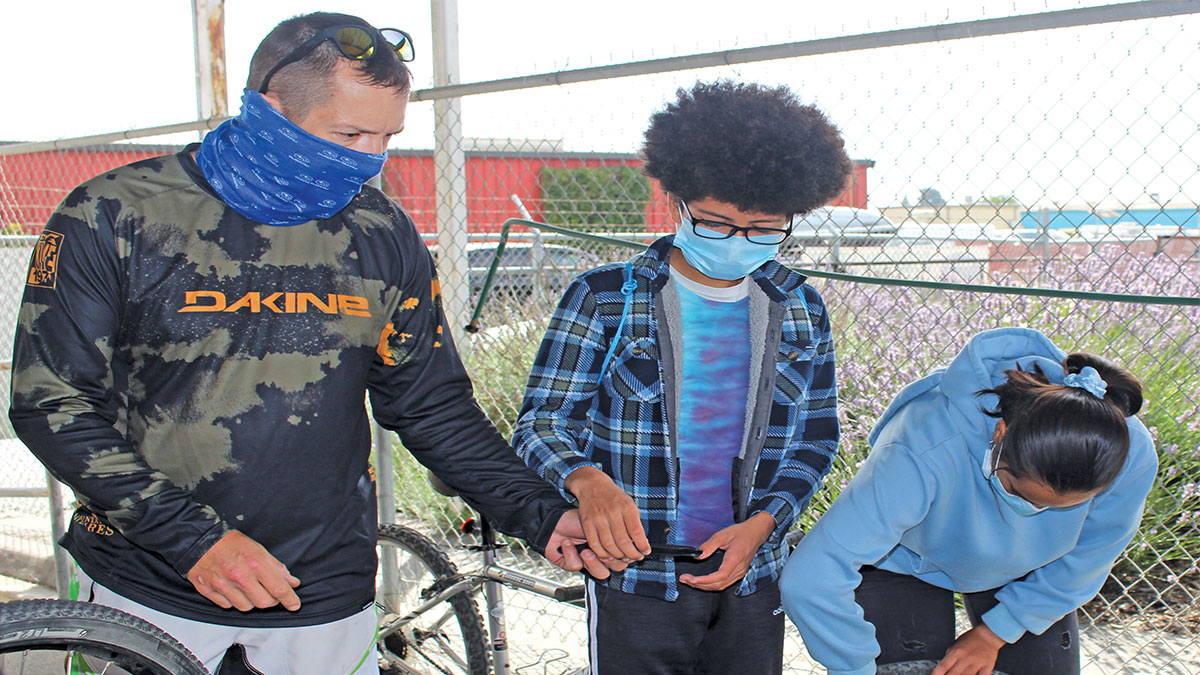 A group of young people gathered Wednesday in front of the Community Bike Collective (CBC) in Watsonville to learn how to change a bicycle tire.

The participants in CBC’s Summer Bike Camp were preparing for a trip to Wilder Ranch State Park later that day. Staff and volunteers from the City of Watsonville and CBC President Kymberly Lacrosse were also on hand.

“What we’re trying to do is diversify the cycling world,” says Bike Santa Cruz County Executive Director Gina Cole. “I always call bikes a ‘machine for freedom.’ You can get out of your house, your yard, your neighborhood. It gives you the self-propelled ability to move.”

Santa Cruz Bike Month kicked off July 1. It is usually held in May to coincide with National Bike Month, but shelter-in-place restrictions forced local groups to go back to the drawing board and find ways to celebrate safely during the Covid-19 pandemic.

For CBC, things began in late June with the start of Bike Camp. Young people, many of them children of essential workers, are taking part in the seven-week camp, which is one of many ongoing projects at the CBC.

Ecology Action started the Santa Cruz Bike Month Challenge, where people who register through the Love to Ride app on their smartphones and log at least one ride per week can win a $100 gift card to a local bike shop. Riders connect, share photos and stories on social media using the hashtag #BikeLoveSC.

“All of this is an effort to make bike riding a joyous experience, and to socially normalize it,” says Matt Miller, Program Specialist at Ecology Action.

Ecology Action will also be offering virtual workshops, presentations and film screenings, as well as a collaboration with the Museum of Art and History with “Exhibition Expeditions,” tours that riders can follow with the help of the RideWithGPS app.

Miller says Bike Month is not only meant to get people biking and supporting Santa Cruz County shops, but also to promote bike safety.

“From countless surveys we’ve done, we’ve found that the single greatest barrier people face to ride is traffic safety,” Miller says. “Some are real concerns, and some are perceived. It is something we’re always addressing.”

In Watsonville, green bike lanes have been popping up in different parts of the city for the past few years. Last week, Cole joined city officials and the Regional Transportation Commission’s Bicycle Advisory Committee at the intersection of Holohan and College roads to discuss bike and pedestrian improvements.

“With Covid-19, we’re seeing things we haven’t seen before,” Cole says. “Like with bus services being reduced—how can people safely get to work? So it goes even beyond freedom. Biking is now a way to survive. We envision a bike-centric community, where there’s plenty of access and resources.”

Miller had a similar outlook.

“We’re seeing a social phenomenon during Covid,” Miller says. “Bikes have become the go-to activity for a lot of people. This year has been so upending—opening people’s eyes to so many inequalities about race, urban planning, the environment, mobility, transportation. And all of it is connected.”

To participate in Santa Cruz Bike Month, go to ecoact.org/bikemonth. For information on the Community Bike Collective, visit communitybikecollective.org.