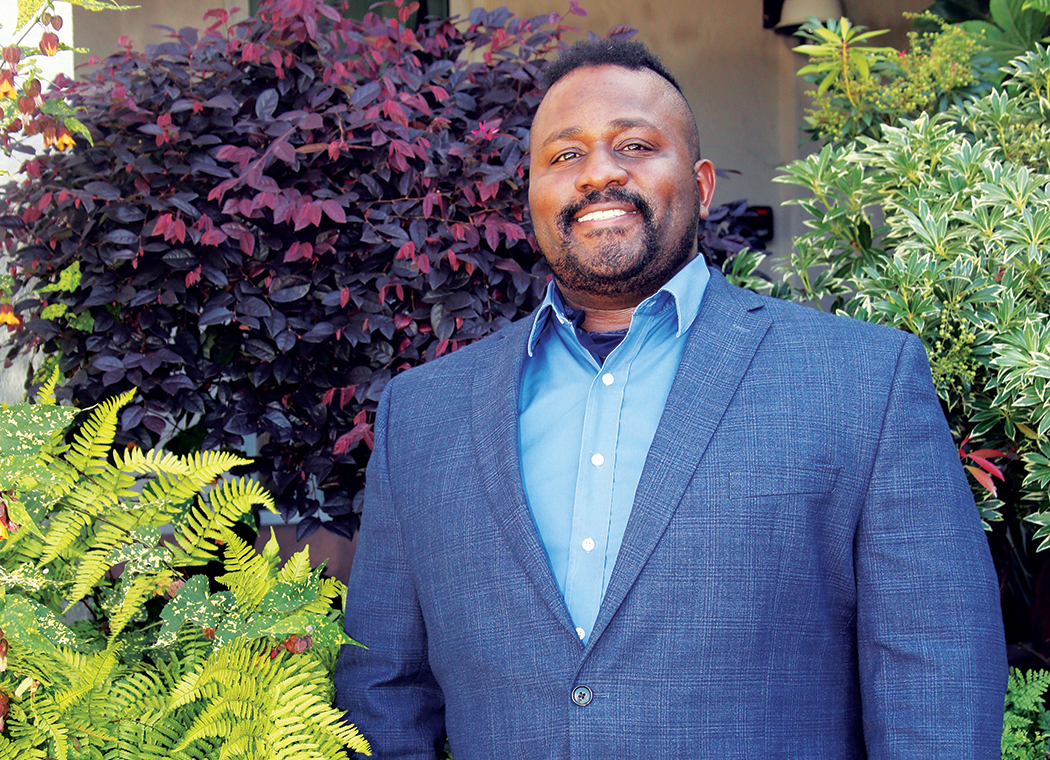 Although the election date is still over a year out, the race for the 3rd District seat on the Santa Cruz County Board of Supervisors is already underway.

Elected onto the City Council in 2018, Cummings received the largest number of votes that year and was immediately elected as vice mayor for the 2019 session. The following year, he became not only Santa Cruz’s first millennial mayor, but also the city’s first Black mayor in its 155-year history.

He believes both of those factors provide him with a unique perspective he will bring to the Board of Supervisors, which is currently all white. If he wins, Cummings will be the third millennial on the five-person board.

“As an African American I can bring the perspective of what it’s like to be in the back demographic living in Santa Cruz County,” he says. “The experience of not only African Americans, but of all people of color.”

Cummings is also a lower-middle-class renter.

Constituents can often find him around town at local music venues and punk shows before retiring to a home he shares with multiple roommates. Another factor he says gives him a perspective that is sorely underrepresented in local government.

“I don’t think there’s any middle-class representation on the Board of Supervisors,” he says. “And as a renter, we struggle very hard to live and exist in Santa Cruz County. We’re seeing so many working-class people being pushed out of this county or being forced to work multiple jobs just to survive. It’s not sustainable.”

Cummings is already gathering endorsements from local business owners and several of his fellow council members such as Vice Mayor Sonja Brunner and Sandy Brown.

Brown, who has served on the council since 2016, says she immediately volunteered her help to Cummings when he told her of his plan to run for supervisor. During their time on the City Council, Cummings and Brown have worked closely on the issues of affordable housing and land use. They led the charge to increase the rate of affordable housing units included in new developments from 15 to 20%.

Brown tells GT during her time working with Cummings that he has demonstrated a willingness to fight for important issues based on all the evidence provided.

“He is willing to step up and push in a thoughtful way with a thorough analysis of the issues,” she says. “He really does his homework.”

Cummings believes the next four years will be crucial for the county as it faces the monumental challenges of homelessness, individuals facing mental health crises, climate change, land use and criminal justice reform.

Despite only serving one term on the Santa Cruz City Council, Cummings says he is ready for a seat on the Board of Supervisors. After all, he served as mayor during one of the most tumultuous years in recent memory.

“One of the things I learned last year is you’re going to be confronted with situations where there is no plan,” he admits. “And I feel like that’s when leadership instincts kick in. There are times when you’re really just going to have to do what’s right and stand up to be the face that’s out in front. It forces you to think about what’s right for the greater good of the community.”

Cummings credits his Ph.D. in ecology and evolutionary biology along with his 20 years experience as an environmental scientist by trade, to giving him a quick start and understanding of the Covid-19 pandemic during its early stages.

Along with grappling with the pandemic in 2020, Cummings also led the city during the Black Lives Matter and racial injustice protests and the CZU Lightning Complex fires. He tells GT these experiences have provided him the tools needed to take on countywide issues.

While a majority of the 3rd District is the city of Santa Cruz itself, district lines stretch from Live Oak up the North Coast, including Bonny Doon and Davenport.

Cummings believes the CZU Lightning Complex, which totaled 1,490 structures and, for several days, displaced 65,000 people in Santa Cruz and San Mateo counties, raised awareness for the need for better infrastructure in the county’s more remote areas.

He acknowledges many constituents were kept updated via Facebook—where unvetted and often false information is shared. As supervisor, he would work to ensure more traditional forms of communication, such as emergency radio frequencies were installed.

He also says many constituents have reached out to him concerning the unincorporated areas’ many power outages because of PG&E blackouts, often due to unsafe fire conditions. He believes these residents are at an unfair disadvantage and that it’s time to look into the possibility of establishing microgrids in these areas. He hopes to bring local government together with professors at UCSC who are currently working on the technology.

“If you don’t have a generator and the power goes down, there’s no way to communicate,” he says. “So figuring out a way to get either microgrids or some form of alternative emergency energy in the mountains is critical for people when the power goes out, which we’re seeing a lot of.”

“He isn’t afraid to get into the messiness of community engagement,” Brown says. “Justin is committed to representing the public interest, engaging in conflicted points of view and bridging the divide between the government and the people.”

“We need to make sure we are always including the community in the conversation,” Cummings says of his idea about local government. “I know this community cares a lot about helping people. We need to make sure it’s involved in the process when the policies have a big impact on people’s lives.”