.Showers, Shelters and A New Divide Over Santa Cruz Homelessness 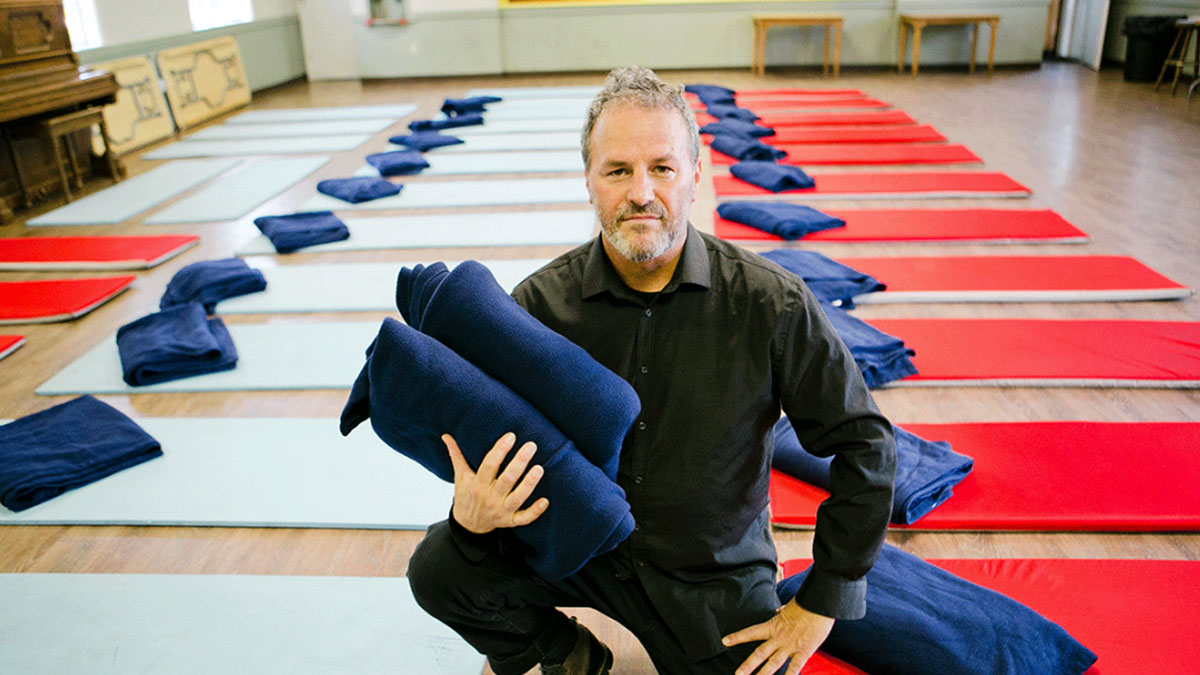 It was around August when the showers in a small yellow building on the edge of downtown Santa Cruz finally gave out. For 13 years, the “hygiene bay” at the nonprofit long known as the Homeless Services Center had offered a reprieve for those with nowhere else to go before a big job interview, a tour of a prospective apartment, or even just to get off the street for a few minutes.

The showers at the building on Coral Street are now sealed off with plywood, and Housing Matters is paying more than $20,000 a month for portable bathroom and shower trailers to fill the void. Like many other homeless services in the area, what may happen longer term is much less clear.

Tensions have flared in recent weeks with the swift reassembly, and then re-eviction, of tents on a swath of public land deemed “Ross Camp 2.0.” The return of the very visible encampment at the mouth of Highway 1 has stoked opposition to proposed changes to a public camping ban, which was, as of press time, set to be taken up by the Santa Cruz City Council on Tuesday night.

The debate comes after a collective of local agencies this month announced a $7 million overhaul of the area’s publicly funded shelter system. After an infusion of state funding, the Homeless Action Partnership said that it will end a 55-bed winter shelter long offered at the Live Oak VFW. Instead, county and city agencies will support Santa Cruz’s legal 60-tent River Street camp, the Salvation Army, religious shelters, and safe parking for those who live in vehicles.

Amid the change—and with heavy rain and cold weather expected to arrive this week—deep divisions have resurfaced between service providers, homeless advocates and public safety activists. They’re split over whether to focus on an immediate need for street-level support, the underlying problem of unaffordable housing, or giving law enforcement more tools to crack down on people sleeping outdoors.

“The system pretends it’s going to give people housing, even though there’s no housing being built,” says Brent Adams, founder of Santa Cruz nonprofit pop-up shelter provider The Warming Center Program. “We force people into this cookie-cutter model of homelessness.”

Adams is seeking more support for scalable day-to-day services, like free laundry or storage for homeless residents, which the Warming Center provides to more than 200 people, without government funding. Some activists support a more radical expansion of encampments.  Housing Matters is among the larger local nonprofits that has doubled down on using housing vouchers, landlord incentives or other avenues to get people into housing.

In the meantime, there are messy side effects of the turmoil to contend with. Police Chief Andy Mills is among the officials who has acknowledged mounting social and political pressure to address open drug use, human waste on neighborhood streets or concerns about safety.

“It seems the culture of lawfulness is quaking in Santa Cruz,” Mills wrote in a recent online post. “These tremors adversely affect our rule of law and, ultimately, the health of our community.”

At Housing Matters, Blom and her colleagues are tracking an evolution in the local homeless population. About 74% of the more than 2,100 homeless people counted in the nonprofit’s countywide survey earlier this year lived in Santa Cruz County before losing stable housing. Women now make up one-third of those living on the street, and the number of homeless young adults ages 18-24 has also spiked, to nearly 570 people.

“Literally, the people who live in our neighborhoods are becoming homeless,” Blom says.

It’s not a fleeting trend. Across demographic groups, the number of people in the county who have been homeless for more than one year has surged to 64%.

Lisa Berkowitz has seen the shift play out first hand at the downtown Santa Cruz site of the Meals on Wheels program that her organization Community Bridges runs for local seniors age 60 and older. A majority of those she sees are now homeless—about 51% of the more than 250 seniors the program served last year at its Louden Nelson Community Center site.

“As hard as it is to be a person who is unhoused and having to look for shelter and food, it becomes that much more difficult and complicated for folks as they age,” Berkowitz says. “Anecdotally, what we hear from folks is in some instances, it’s a breakup of a relationship. There are a lot of folks who are Vietnam vets.”

While Community Bridges looks to raise funds for weekend meals in response to seniors turning up hungry on Mondays, other local nonprofits are digging into the root causes of homelessness. Pajaro Valley Shelter Services wants to expand its capacity to offer trauma services, since people experiencing homelessness are four times more likely to have suffered childhood trauma like abuse or neglect.

With rents surging in South County, Pajaro Valley Shelter Services Executive Director Mike Johnson says the agency’s waitlist grew as long as 220 people last winter. The nonprofit’s 136-bed shelter and services are designed for families, and more than 90% of clients are Latino. Some are undocumented immigrants or migrant workers who face additional barriers to housing.

“Usually, it’s a young, struggling mom of one to three kids,” Johnson says.

In Santa Cruz County, the most recent survey of homeless residents counted 2,167 people, though demographers often warn that such “point-in-time counts” are prone to undercounting. Still, that number is crucial to proposals currently on the table to change the way local agencies provide shelter or enforce bans on sleeping in public.

The new countywide shelter budget would fund 549 slots across the outdoor River Street encampment, safe parking and indoor shelters like the Salvation Army, according to the Homeless Action Partnership. The number of indoor beds funded would decrease to 135 as part of a goal to move from “a triage system” toward a year-round “system of shelter and services capable of addressing our homelessness crisis,” Santa Cruz County Homeless Services Coordinator Rayne Perez said in a press release announcing the change.

For street-level service providers like Adams, the choice to move away from a reliable indoor shelter beds highlights a glaring disconnect: how to house more people when there’s not enough housing.

“It’s a massive, golden bridge to nowhere,” Adams says. “We’re seeing a reduction in services while there’s a one-time increase in funding.”

At the city level, the Santa Cruz City Council’s plan to modify a ban on camping in public spaces has also inspired divergent views.

The ban, which currently makes it a ticketable offense to “camp” in public has not been enforced since a court ruled it that such policies violate the Constitution’s prohibition on cruel and unusual punishment if no other viable shelter is available.

This week, the council will debate reinstating the ban during the day, from 7am to 10pm, frustrating some homeless advocates. Other changes are opposed by public safety critics, including a proposal to prohibit ticketing if a person is camping on private land with permission, or if a police officer determines that there is no shelter space available.

Santa Cruz Police Chief Mills has voiced support for the revised ordinance, and added in a blog post that the city could ban camping on more public spaces, crack down on syringes, add new parking time limits, or increase some citations to misdemeanors. Still, he cautions that, “Tickets alone cannot solve these problems” absent housing and mental health services, and he also proposes that the city offer more storage or consider limited amnesty for “good behavior.”

Among the 182 pages of public comments submitted to the City Council ahead of the camping ban debate, dozens of messages—some signed by backers of an anti-homeless rights City Council recall campaign—used boilerplate language to urge the council to delay a decision by at least two weeks and “make sure we do not increase the homeless population” with the changes.

“Homeless individuals may seem like they have no where (sic) to go, but they got here & and they can leave,” wrote Jennifer Greene. “Be STRONG against the people who say we need compassion.”

On the other side of the issue, a petition to “make City Council sleep outside for a week before voting on a new camping ban” has been circulating on pro-homeless rights social media pages. A minority of letters to policymakers asked them to consider the human toll that can accompany life on the street.

“This new rule proposed is unfair and inhuman,” wrote Satya Orion. “Where would you go if you had no home, office or car to retreat to?”

Previous ArticleNuz: The Only Logical Conclusion About Santa Cruz’s Recall

Next ArticleWelcome to Deepfake Hell