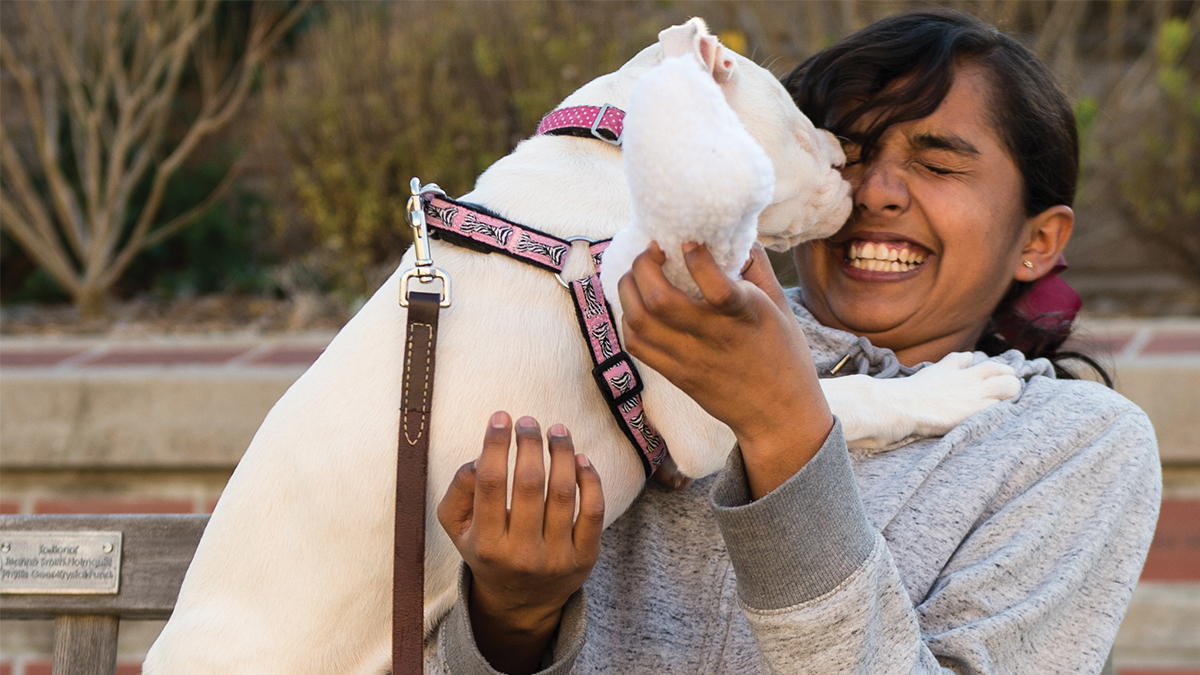 Stepping into the center of a well-lit conference room, Michelle* and John* volunteer their Chihuahua, Mango, to show off a trick they’ve taught him. Following Michelle’s command, Mango does a spin—no small feat for a shelter dog who lost his hind leg just three weeks ago.

The room bursts into celebratory applause as the three of them leave the center stage area and return to one corner of the room, making room for the next group to step into the spotlight. Michelle and John, two teenagers, are preparing for the graduation program of their eight-week session, where three teams will introduce their adoptable, well-trained dogs—two pit bulls and a Chihuahua—to a larger audience.

Michelle feels she can relate to Mango, a canine she met through the UnChained program, a nonprofit that pairs at-risk youth with shelter dogs to help them both learn valuable skills. “It’s like he understands what loss is, so we kinda get each other because loss is loss,” Michelle says. “We just grieve differently.”

UnChained is one of the two nonprofits helping animals in the third annual Santa Cruz Gives campaign, which raises money for charity groups during the holiday season. Melissa Wolf, founder and director of UnChained, worked for 15 years in social work, devoting all of her free time to animal welfare. She saw devastating stories of animals, she says, and realized people could help them in a way that was mutually beneficial.

“It’s really about shaping the kids and helping them through the vehicle of dogs,” Wolf says.

Jen Walker, a humane education specialist, is leading today’s training session at the Kinship Center in Salinas. Walker, also the programs manager of the Santa Cruz County Animal Shelter, is showing everyone a skill she calls “Zen dog,” and she demonstrates by holding a piece of kibble in one hand, and a much tastier cheese treat in the other. The trick teaches pups delayed gratification, a skill both dogs and humans need to learn, Walker says, and the youth in this program are in charge of teaching it.

Walker is also a volunteer board member of Heading Home Animal Rescue, the other animal-loving nonprofit participating in Santa Cruz Gives this year.

Heading Home is a placement partner, meaning it helps find alternative placement options for animals with special needs, such as an identified medical condition or behavioral needs. The nonprofit takes more animals from the shelter, Walker says, than all of the other 30-odd placement partners combined. “Their strong focus on caring for local animals in need is what really sets them apart from other organizations,” she says.

Heading Home acts as a bridge between shelters and their adoptive families. They take in animals who arrive at the shelter needing additional help—whether they’re neonates, have medical needs the shelter can’t address, or are simply shy and need help getting socialized. Working with their network of veterinarians and volunteers, Heading Home prepares these pets for adoption.

Heading Home is currently helping three puppies who were rescued from an abandoned travel carrier that was left in a Watsonville church parking lot. Two of the three puppies were pre-adopted, meaning that after being spayed/neutered, they would go home to someone who wanted them. But the shelter soon discovered that all three had parvo, a highly contagious canine disease, possibly caused from eating their own feces when they were trapped in the carrier. Melissa Finley, director of Heading Home has been working to get the puppies the medical care they need to survive. Forest, the third puppy, is still up for adoption.

Petey, a pit bull mix in the UnChained program, has been in and out of the shelter a couple of times. He has seen tremendous growth in the last few weeks, Wolf says, now that he has been working with his trainer, Kristen. The teens remember how Petey spent his first training session screaming and crying.

Now he is a much calmer dog and is able to follow Kristen’s “leave it” command in the Zen dog trick, Kristen says.

“It makes me feel good that I helped him with that,” she says.

*Name has been changed to protect child’s identity.

To donate to any of the 33 nonprofits participating in Santa Cruz Gives, visit santacruzgives.org through Monday, Dec. 31.