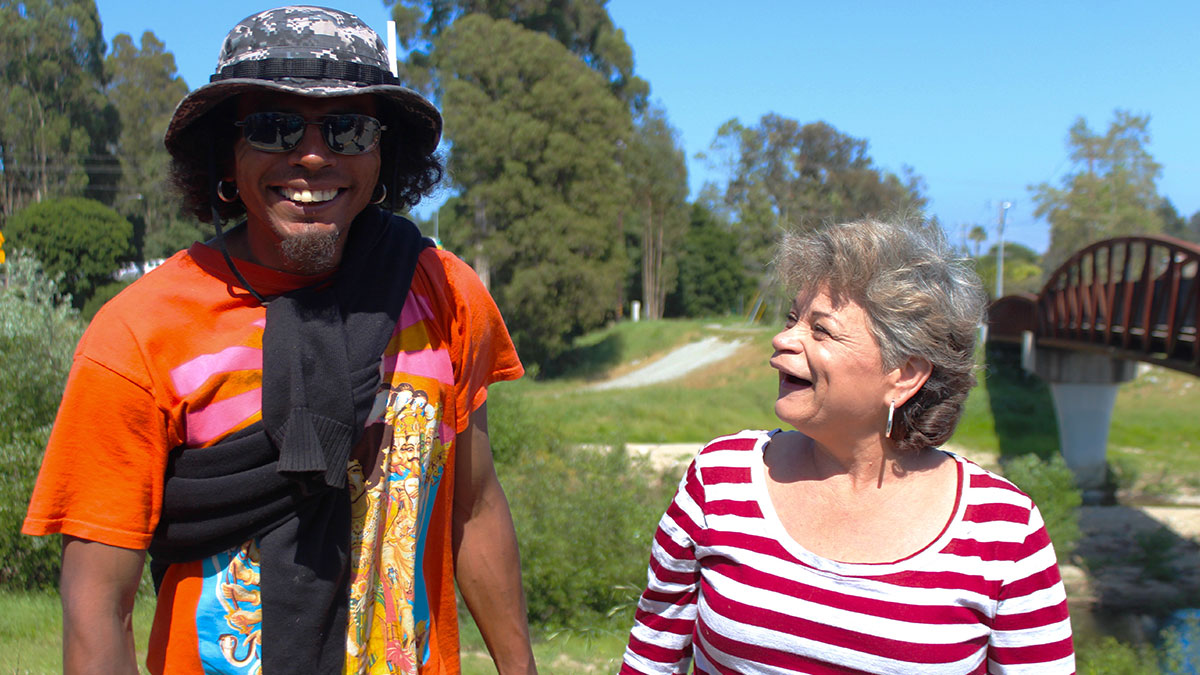 On the afternoon before the fate of her adopted home will be decided by a judge, Desieire Quintero takes a break to slice open an M&M candy bar with the buck knife she keeps on her hip.

It’s been five months since Quintero and a small band of others moved to the sliver of public land between Highway 1 and the Ross discount store on the fringe of downtown Santa Cruz. She and some other homeless residents say that law enforcement told them to move there last fall, after a wildfire broke out in the area where they used to live in the Pogonip forest near UCSC.

In recent weeks, residents estimate that the Ross Camp has peaked at around 250 people, plus tents, tarps, pets, and a wide array of other belongings. The group won an unexpected legal victory earlier this week, when a court granted a restraining order barring the city from shutting the camp down and moving residents to the familiar “benchlands” of San Lorenzo Park.

Ahead of a Friday court hearing to decide the fate of the Ross camp, GT spoke to residents about how they got there, what the space means to them and where they may go from here.

“I worked my butt off, you know, to raise my children, to put a roof over their heads, without no support from anybody except for my friends and my colleagues. Now I’m by myself, and I can’t afford to pay $3,000 a month for rent. It’s like maybe this is the purpose I was put here for. I don’t know. It’s better than being out there by yourself as far as I’m concerned. They fear us, but there’s nothing to fear.”

“I grew up without a family, really. The dysfunctional family I had, I was the grown up from a young age, like 7. I never really had a childhood, and I still haven’t had one. It doesn’t bother me, but I hate when grown ups act like kids and I can’t. You know what I’m sayin? That makes me jealous. It’s like you guys can sit on city council and argue with each other about what so-and-so said at lunch like little kids, but as soon as I start actin like one, everybody wants to call the police.”

“People have been very friendly. Can you please put that down? In the week that I’ve been here, people have been warm and welcoming. Supportive, I guess. People have really tried to make me feel—not accepted, but welcome. I was born here, but I don’t have a place to live here.”

“There’s no out-of-the box thinking. This is Santa Cruz. Aren’t we artisans and shit? I was born in California, raised in L.A. My son was born here, at Dominican, and went to Scotts Valley High. If another person who’s been here for five years tells me that I can’t afford to live here, I’m gonna scream. Don’t tell me to move because you wanna live here and raise the rent.”

“You know, history is pretty cool. In like the 1900s, they had a tent city across from the Boardwalk. They had like 200 tents. Everybody living in a little tent with a little bed, a little nightstand, water, and a toilet. I dunno, I guess there wasn’t as much, like, drug abuse then, but if it worked back then, why wouldn’t it work now? Just let us do our job. It seems to me like people don’t really care.”

“I used to be a general contractor. Right now I’m trying to do some gardening with a high school buddy. It’s hard when you don’t have a truck and you don’t have the tools and stuff. We all have our stories of why we’re out here … It’s not so much the space as it is standing our ground, you know, and not being pushed around anymore. Feeling like an invisible entity that (the city) is getting money to deal with, and then they don’t want to deal with us. I’ve lived here almost all my life, at least 54 years of it.”

“I mean I understand there’s no such thing as bad publicity, but this is no way to attract tourism.”

Next ArticleBe Our Guest: Chromeo