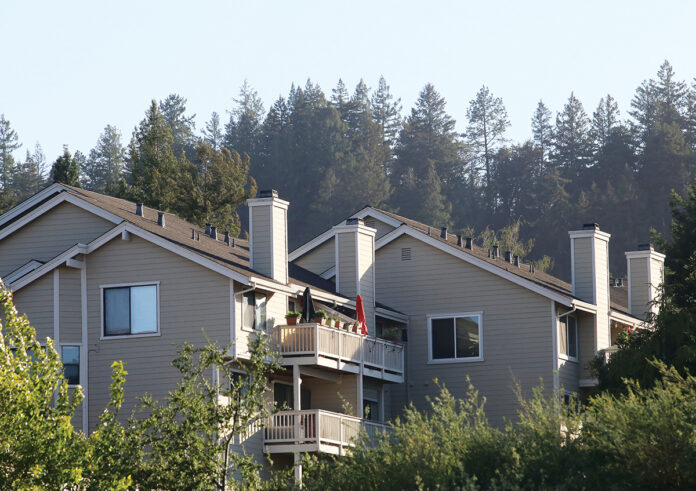 Scotts Valley is required to give the state an annual update on its progress toward helping to alleviate California’s housing crunch—including on delivering affordable places to live.

And while this year the results on that front weren’t great, they sure were better than last year, according to numbers from a recent report.

The 2021 Annual Progress Report, presented to Scotts Valley City Council on March 16 by contract planner Jonathan Kwan, was a chance for the elected leaders to get a reality check about how the City’s “Housing Element” is working out, in practice.

The Housing Element is the document that serves as a roadmap for residential development in the community.

Under the latest Regional Housing Needs Allocation (RHNA) cycle, Scotts Valley is supposed to produce 140 units. Of these, 56 are supposed to be “affordable”—for people who fall into the low and very low-income households.

By last year, Scotts Valley had already permitted 147 housing units, but less than 3% of these were affordable residences.

This year, housing development applications for 28 units were approved and building permits were issued for 36 units.

Building permits were “signed off” and finalized for 20 units, primarily in The Cove and The Terrace developments.

Only units that secured actual building permits in 2021 count toward the RHNA tally.

So, while last year Scotts Valley only managed to generate a single affordable unit, this report boasted six times that number.

All of these are part of the Acorn Commons project. The other 30 units that received a building permit were “above-moderate” residences.

Every year Scotts Valley is required to report to state officials the number of development applications it took in, how many proposals translated to approvals and the specific sites that were rezoned to make way for new residences, among other data points.

Speaking during the public comment period, Tim Willoughby, chair of Affordable Housing NOW, said he’d keep his input brief as he was aware the agenda item was only to approve the administrative report.

“For ‘very low,’ ‘low’ and ‘moderate,’ in the eight-year cycle, you’ve done about a quarter, and that’s, unfortunately, that’s not really great,” he said through a chuckle. “But it is progress.”

However, he cheered the production of the six “very low income” units.

“As some of you know, those are some of the hardest units to meet the RHNA numbers,” he said. “Very few cities have been able to meet their RHNA numbers for that ‘very low’ category. So that’s something to celebrate—that there’s six in a city that’s not producing a lot of units.”

He also lauded Scotts Valley for working toward aligning the area where affordable housing development rules apply with the city’s perimeter.

“In Scotts Valley that’s probably the most important way that you’re going to end up with more affordable housing units,” he said. “I think that’s a good step forward, and I didn’t see that that was listed in the report.”

At its last meeting, the city council revealed it’s moving along more slowly than it would like on this project, however it planned to refocus its priorities during a Tuesday study session.