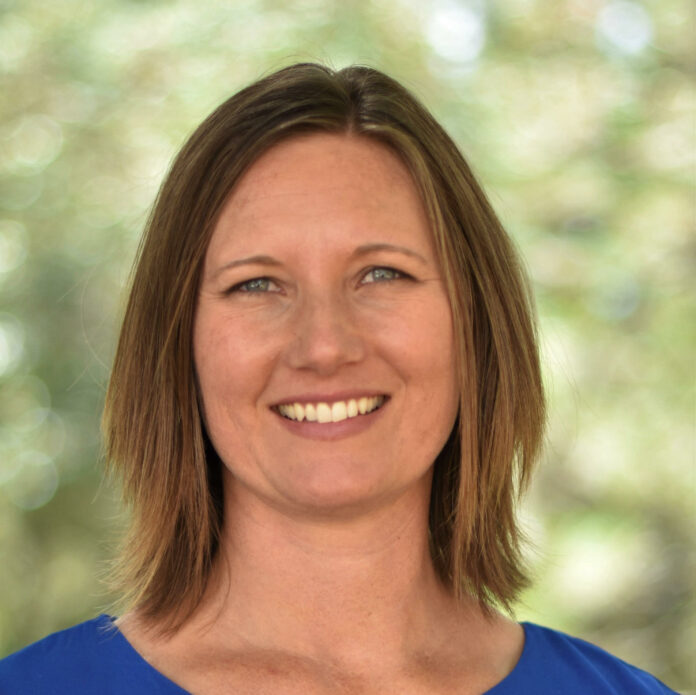 And LaGoe couldn’t be happier.

“I’m so excited to join the community and join the team of staff at Scotts Valley,” she said. “I think it’s just a really good fit with my background.”

LaGoe has worked in Nevada County for the past nine years. Before that she worked in the solar energy sector and for nonprofits, including as the market manager at Nevada City Farmers Market.

“Coming down to the Santa Cruz area is something I’ve done several times on vacations,” she said. “My husband lives in San Jose, so we’ve been living in two places for the last two years.”

When she was considering which nearby community she might want to work in, Scotts Valley was at the top of her list, she says.

Now that she’s secured the position—expected to be formalized Dec. 1 by the City Council—her husband and two stepsons have begun considering housing options here.

LaGoe says she’s looking forward to hiking with them around Scotts Valley on weekends.

“I might get back into riding horses,” she added. “That’s something that was a passion of mine in the past.”

Scotts Valley Mayor Derek Timm says while their hiring casts netted plenty of good candidates, it was clear LaGoe was the best of the catch.

“When she came in and we met with her, both the staff and the Council were just so impressed with her,” he said. “Everyone just felt she was the best candidate for our city.”

Her wildfire prevention task force work in Nevada County was of particular note, he said.

“She set it up and ran it,” he said. “I was more impressed with the County’s trust in her to run something that’s so complex.”

LaGoe studied political science at the University of Nebraska-Lincoln and public administration at CSU Northridge. She’s also served as a board member for the Nevada County Economic Resource Council.

She says she’s excited to work on economic development in Scotts Valley, including focusing on the question, “How can we recover from the pandemic?”

That’s something Timm says will be an important part of her new role.

“One of the key ones is making sure we have economic stability for our community for the future,” he said. “We are in the process of completing renovations in Scotts Valley to the Kmart center and getting that turned into the Target center.”

Timm said Scotts Valley’s recruitment consultant said, despite a difficult climate for hiring, the community garnered more interest than others have recently.

There is a dearth of talent for senior local government roles, the recruiter said, because after the financial crisis of 2008 municipalities slimmed their middle-management roles, according to Timm.

He adds it wasn’t that the other applicants weren’t appealing—just that LaGoe was clearly a better choice.

“In the recruitment process there were other candidates who had been city managers in other cities who had great pedigrees, but her skill set and her leadership qualities were just a step higher,” he said. “I mean, she really stood out.”

Previous ArticleBiden Vows to Fight Omicron With ‘Science and Speed, Not Chaos and Confusion’