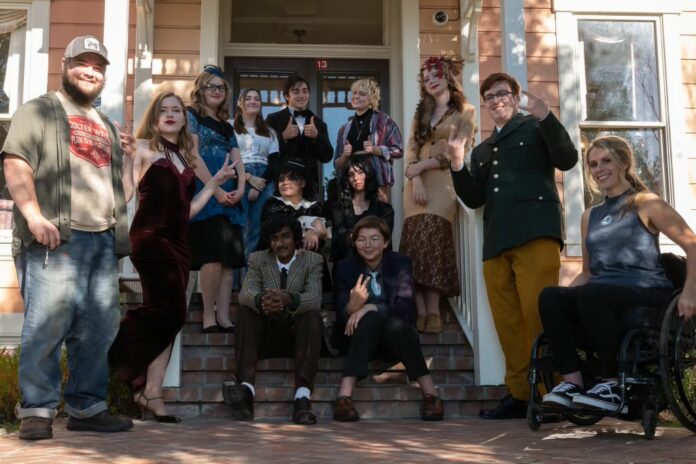 Holiday gifts come in all shapes and sizes, but the best ones come from the heart.

Just ask Kendra Kannegaard, 27, a former Scotts Valley High School student who loved theater. She has since become the school’s English and drama teacher, and theater juggernaut.  Kannegaard was 17 when her life was turned upside down by a large spinal tumor that took up residence in her body, resulting in a 14-hour surgery, a zipper scar down her spine and an introduction to moving through life in a wheelchair.

Back then, a $12,000 wheelchair seemed nearly out of reach for the vivacious and outgoing drama student, so Malone’s Grill hosted a fundraiser for Kannegaard to raise the balance of the cost not covered by insurance.

Now, in 2021, Kannegaard, affectionately known as “Ms. K.” to her students, is in need of a new set of wheels, and her drama students have taken it upon themselves to raise the monies needed to get Kannegaard the chair she critically needs but of which she could only dream.

“Wheelchairs are not a one-size-fits-all kind of equipment,” said Kannegaard. “Each specification of the chair, from the width of the seat to the type of wheels and frame composition are made to order, so you can’t just walk into a store and pick one up. The measurements are precise, and custom fit to the individual.”

As Kannegaard says, people can change a lot over time.

“The 5-year-old chair I have now is no longer a good fit for me,” said Kannegaard, remarking on how she had shared her thoughts with her students during class earlier this month.

Betwixt Jones-Cruz, a member of Kannegaard’s drama posse, and the organizer of a GoFundMe fundraiser that aims to help buy the new wheelchair, said that “As soon as I heard she needed a new wheelchair, I just knew I had to help.”

Word of Jones-Cruz’s philanthropy spread to teachers, families and SVHS alumni, and 30 students gleefully presented the results to Kannegaard in a surprise announcement.

“30 drama kids with a plan is really something,” quipped Kannegaard.

In less than four days, Jones-Cruz said they had raised almost $7,000.

“Our goal was originally $8,000 because we wanted to get her the frame she needed,” said Asher Hildebrand, a drama student at the high school. “Now we’re aiming for $12,000 to completely cover the wheelchair.”

The GoFundMe account’s total as of Dec. 21 is more than $10,000, and the students are on their way to making a wish come true for Kannegaard.

“I’m still speechless about it,” said Kannegaard, “that these kids would take the time and make the effort to raise this money. I didn’t have words—how do you say thank you for something like this? I was stunned speechless. I’m so proud of all of these kids—they are the kindest people I have ever met, and I have the honor of teaching them.”

The wheels alone for Kannegaard’s chair are $900, the carbon fiber backrest is $700, and frames are thousands, says Kannegaard.

“She’s the best director I’ve ever had, and I have spent months wracking my brain about how I could support her. I couldn’t think of anything until she mentioned the need for a new wheelchair,” said Jones-Cruz, “and then it just came together.”

Multiple students participated in the spread of the campaign, who shared it amongst their friends and Facebook groups.

“I was getting emails every few seconds—one person donated $1,000 on the very first day,” said Jones-Cruz.

Sydney Peterson took Kannegaard’s drama class when she started at Scotts Valley High School. She said Kannegaard helped her “get out of my comfort zone.”

“I can’t thank her enough, and this is my way of showing her that I love her, and how I will never forget her,” she said.

Added drama student Kavin Pugazhenthi: “The pandemic made things tough for all of us, and we all struggled to get through it. The overall impact that this department has had on the students is tremendous, and none of it would have been possible without Ms. K. This doesn’t begin to return even a fraction of what she and this department have given to us students.”

Hildebrand had been doing drama tech in middle school, so he was familiar with life in theater, and he found a way to use his voice during Kannegaard’s class.

“She helped me find my voice in drama, and I’m so grateful to her for that,” he said.

Tisa Sholokhman had done ensemble theater and tech in middle school, so when Kannegaard’s drama class became available via Zoom, she signed up.

“I thought I would never be able to fit in, but for the past two years, I’ve become a part of that class, and every day that I have drama, it’s a reason for me to keep going,” she said. “I’ve had a lot of dark times this year, and drama has really shown me the light. I feel accepted, and like a part of something for once in my life. I finally feel like I’m worth something.”

With a new set of wheels in her future, Kannegaard can turn her focus to additional forward momentum in her life: the exchange of wedding vows with her fiancée, Luke Thornley, whom she met while a drama student at SVHS.

“This school and department have given me more than I can express,” said Kannegaard, wiping away tears. “I am so blessed. It’s the greatest gift to be a teacher.”

The GoFundMe for Ms. K. is still up. Visit bit.ly/3ss9J6Z to chip in, and help the drama students of Scotts Valley High School reach their goal.

Next ArticleFormer SVPD Officer Files Another Suit Against City