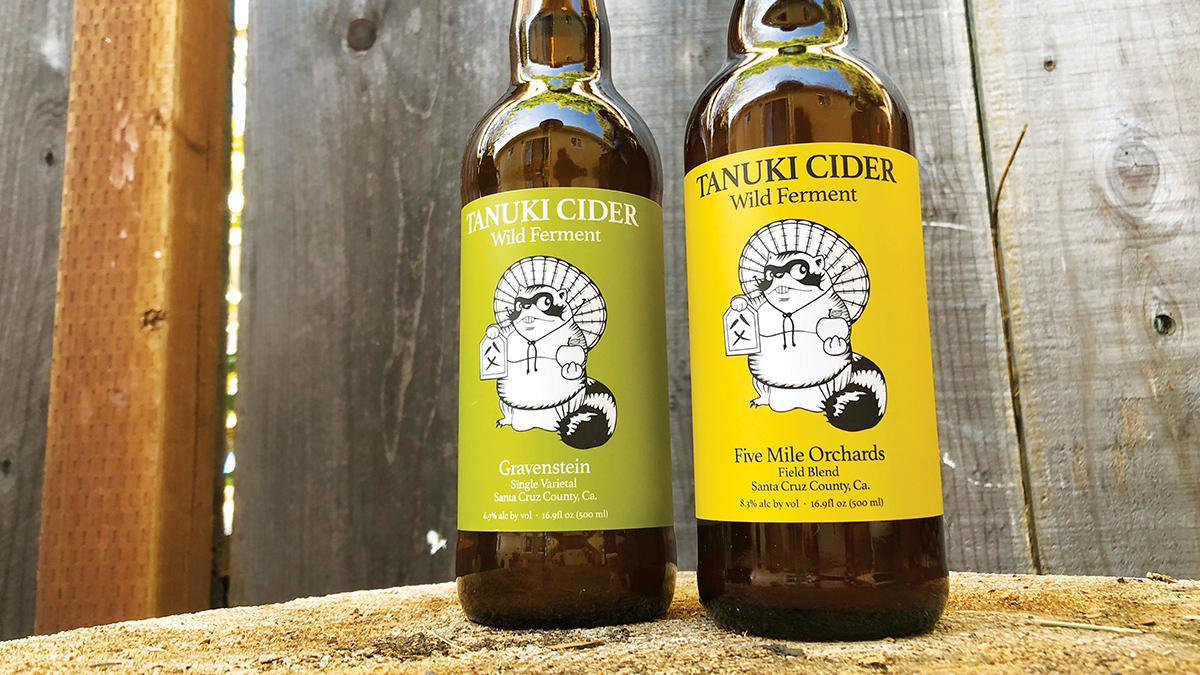 When Robby Honda lived in Japan, he really started to grasp the cultural phenomenon that is the tanuki.

The real-life animals, which look like a cross between a fox and a raccoon, are idolized in Japanese mythology as shapeshifters that keep the human ego in check with their mischief—a dynamic immortalized in tanuki cartoons, statues and even towns dedicated to the “raccoon dog.”

“We’re Japanese-American, and these little figures were always around,” says Honda, the owner of Santa Cruz’s Tanuki Cider, who grew up in Orange County and lived in Japan before he moved to the Central Coast a decade ago. “Through the mythology, they’ve evolved into these prankster archetypes.”

The inside joke (see if you can spot the tanuki’s famous anatomical quirk, which Honda doesn’t like to spoil for the uninitiated) seemed perfect when he and his brother started dreaming up a craft cider company. In the five years since, Tanuki Cider has become a local cult sensation stocked at restaurants including Gabriella Cafe, Home and Oswald, plus retailers like New Leaf and Whole Foods.

But it almost all came crashing down when Honda’s brother Brad, the artist who designed the Tanuki Cider label, died suddenly at age 33 in 2016.

“I quit. It was pretty heavy,” Honda says. “That’s a bigger part of the project. It’s more than a business. It’s more than cider and all this stuff. It’s a connection to my brother.”

That’s especially true, he says, since apples have always been part of the family. Honda spent much of his childhood at a family orchard in Sebastopol.

Still, he didn’t set out to get into hard cider, not least because of its reputation as a sweeter, weaker alternative for drinkers who can’t handle beer or wine. The idea of doing something more refined with the region’s wealth of apples emerged when Honda was working at Fogline Farm in the Santa Cruz Mountains.

“I was interested in agriculture, apples specifically, and just kind of got lucky with the cider thing taking off,” Honda says. “When I moved to town, there were zero cider commercial businesses. Now there’s like seven.”

Tanuki’s niche is dry, acidic, farmhouse-style ciders inspired by those Honda tasted in his wife’s native England. With an expanding lineup of “terroir-driven” ciders featuring Gravenstein, Newtown Pippin, Bellflower, Mutsu and other apples, Honda now has his sights set on a Santa Cruz County tasting room and retail outpost.

“It’s been over a year now where I’ve been trying to figure out how to find a home,” Honda says.  “That’s our goal.”

He’s gotten creative in the meantime, partnering with Santa Cruz Cider Company to buy equipment to press apple juice, and leaning on wineries like Equinox and Sones Cellars for access to fermentation tanks and a production license.

“I’m like a gypsy,” Honda says, though he’s not alone. Other local food and drink purveyors have followed a similarly nomadic path, like Effigy Brewing or 11th Hour coffee, which both contracted with other producers in their industries while starting up in increasingly cost-prohibitive Santa Cruz County.

Part of the challenge with cider, Honda says, is that the category is still a stepchild of the wine industry. Tanuki Cider has experimented with different can and bottle formats, which usually sell for $7-10, and in recent seasons has released variations like a Blue Pippin combination of blueberries and Newtown Pippin apples, plus wild-fermented ciders produced without yeast.

“It’s the same thing as grapes. We’re looking for sugar, acid and tannin,” Honda says. “Those things are going to give a wine or a cider the body, the texture, something interesting.”

While the philosophy is ambitious, all it takes is the tanuki on the bottle to keep things in perspective.

“You can go as deep or as shallow as you want,” Honda says. “At the end of the day, it’s a bottle with some booze in it. Nothing more, nothing less.”