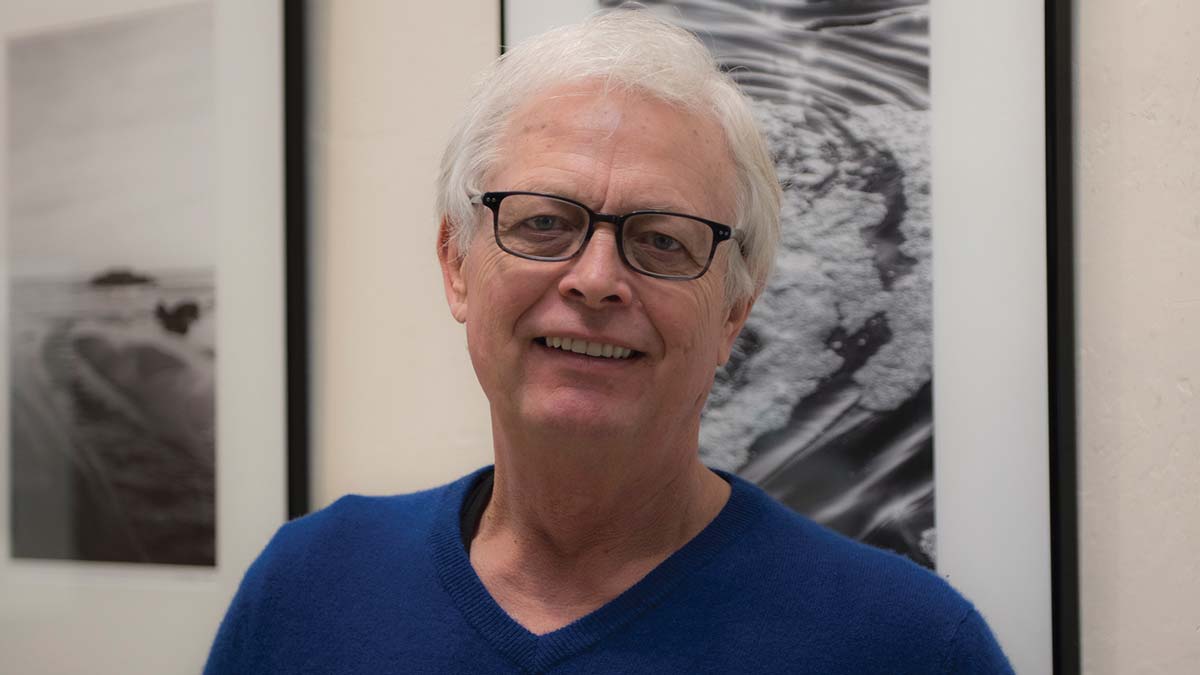 [take this out]Every now and then a photograph transports its subject into a compelling new space. Coastal cliffs overlooking beach and waves: A familiar subject. Yet everyone who sees Tim Matthews’ shot of Pomponio Beach is stopped in their tracks. The image is that powerful. It demands your attention. Such a photograph could easily make a career. But in Matthews’ case, the career was already well underway.
“It was low tide, my wife and I had stopped to walk on the beach after a visit to San Francisco,” Matthews recalls of the engaging image. The image is faintly perfumed with warm color. “I call it digital tone,” Matthews says with a grin. Shot with his Nikon D810, the image was run through his computer, then cropped and printed.
“They all start out in color,” he observes, as we both study the haunting seascape. “Then I desaturate it. I like black and white.” The slight blush of color warms up the heroic shelf of cliffs and sand. The haunting image is 14 x 21 inches, a size the tall photographer with a shock of boyish white hair tends to favor.
What makes it so memorable is that Matthews’ cliffs plunge diagonally across the picture plane, revealing both the sand at our feet as well as the cliff edge towering above and then out of the left top corner of the print. The diagonal implies everything about the setting. The cliff begins, and ends, far beyond our point of view. The shot begins, and ends, with a seasoned eye.
Born in Santa Cruz into a family deeply rooted in the Central Coast, Matthews grew up in Hollister and went to UCSC.

Seacliff pier, the Capitola skyline, all blurred, just out of reach, in characteristic pinhole fashion. They feel, and look, like memories.

“I used to tell people that I majored in sailing and minored in geophysics,” he says. Other directions called. Always a sailor, Mathews began work in the marine industry, at O’Neill’s and West Marine. “That’s when I really began doing photography,” he explains. “Doing catalog work for West Marine and for NHS skateboards. And I still have some long-standing clients, mostly for artist’s portfolio work and catalogs.”
Pursuing his own fine-art photography “off and on,” Matthews got serious about it in the mid-’80s, now showing his atmospheric black and white prints at six to eight shows each year. “And I’ve been doing Open Studios for the past four or five years,” he says. Then with a smile, “Sales are always nice.”
The barnlike structure Matthews shares with his wife’s etched glass business contains a bohemian warren of studios and offices. Elegantly framed prints line two walls, and a suite of softly blurred color prints are stacked along one corner. “I don’t do much color now,” Matthews admits, showing me each of the subtly colored images. “I fooled around with a pinhole camera for a while, and made these. I call the series “Childhood Memories.” Seacliff pier, the Capitola skyline, all blurred, just out of reach, in characteristic pinhole fashion. They feel, and look, like memories.
“With the 2008 recession,” he continues. “the commercial business slowed down. I started playing around with the scanner, digitizing old negatives and making digital prints out of them.” He was a bit surprised with the results. “I realized I should be doing my own work,” he says. Matthews’ work offers up the timeless beauty of nature. Waterfalls, rushing streams, foggy coastlines. “My actual vision has stayed consistent. Landscapes. The natural world has always been my influence and my interest,” he explains. “My family had a farm in Aptos. I have always had a connection to the natural world, an older world.”
Matthews held out for a while, resisting digital. “I was attached to film. And early digital technology was expensive,” he says. But that was then. “The last time I shot film was 2011,” he says.
Matthews contends that the rise of the iPhone and “all the stuff on Facebook and Instagram doesn’t bother him. “Everything’s changing,” he admits with a slow grin. “Everything’s become more visual.”
“I’m not trying to make a living with these,” he says, although he does admit that he sells a lot of his elegant matted and framed prints to people who want to decorate their second and third homes, and to coastal resorts. “I run the glass studio here, and do metalwork for the glass projects,” he says. He likes his neighbors, John Crawford and Richard Mayhew—both oil painters—who work in the buildings next door.
Matthews continues to explore his love for the natural world. “Nostalgia in advance,” he calls his prints. The rugged grandeur of his images from field trips to the Sierras, such as his Mono Creek series, were influenced by Paul Strand and Minor White. “I’m intrigued by the drama of the diagonal and by abstract composition,” he says. “I do enjoy the craft of it. It’s part of the process. There’s big difference between uploading something to the Internet and working with prints.”
The photographic prints of Tim Matthews invariably return to the irresistible natural magnets—the mountains, the water. “Yes it’s been done,” he agrees. “But everything’s been done.”

Next ArticleSex, Drugs and Rockabilly