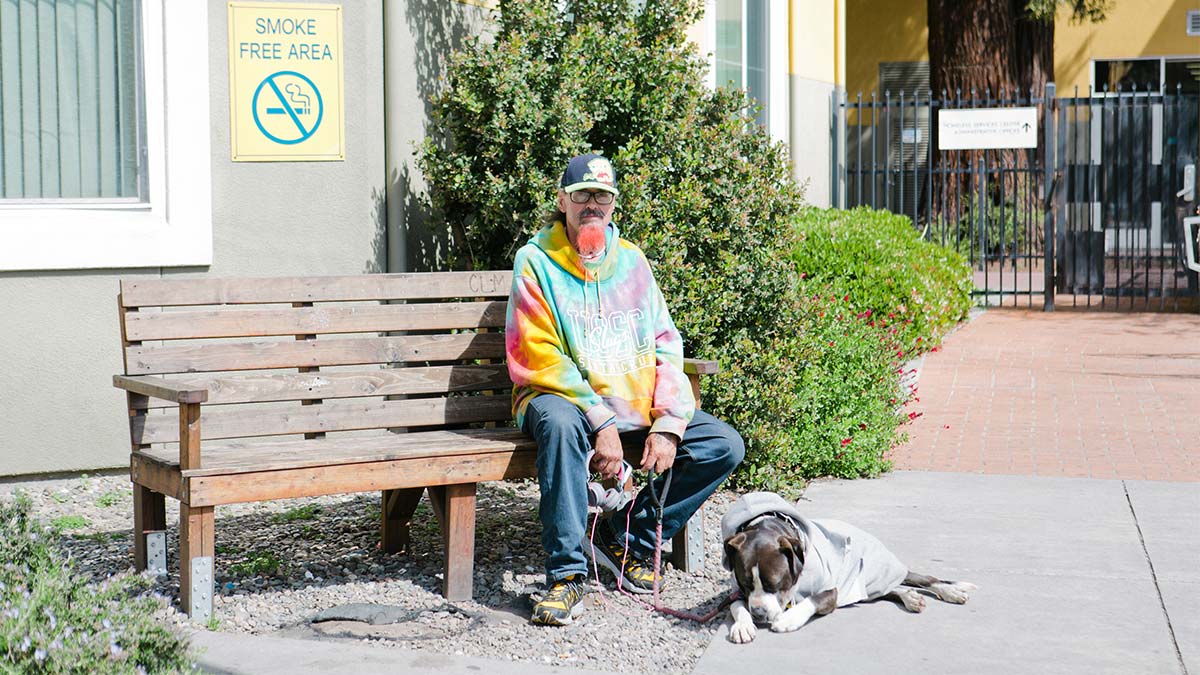 Paul Steffen is in the midst of one of Santa Cruz’s greatest stresses: looking for a place to live. Currently living out of the Paige Smith building at the Homeless Services Center (HSC), he has applied to 15 places over the last several months, and has been turned away 15 times.
“I want to stay in Santa Cruz,” says the 62-year-old Steffen, stroking his bright-red-dyed goatee. “I’ve lived in other places, but this is my home.”
Steffen says he has a Housing Choice Voucher (HCV), commonly known as a Section 8 voucher, to help assist with the rent. Time is ticking, with his voucher expiring next month, he says. In the Santa Cruz rental market, a housing voucher is no golden ticket.
“I think anyone with a voucher is having a harder time [finding housing] than someone without one,” says Shannon Healer, the director of the Veterans Affairs Supportive Housing (VASH).
Federally funded by the Department of Housing and Urban Development (HUD), the HCV provides rental assistance for low-income people and families. They can apply for various vouchers through collaborative groups like HSC and the 180/2020 housing project. There are also special vouchers awarded to veterans with applications through the Veterans Resource Center and Veterans Services.
While the program is meant to help people with financial or medical problems, it often comes with its own set of stigmas and stipulations. Scouring Craigslist housing ads, an attachment at the end often reads, “No Section 8.” California law does not allow landlords to discriminate based on source of income, but the housing voucher is considered a subsidy and therefore not a source of income. Some cities and counties throughout the state have prohibited discrimination against housing applicants with Section 8 vouchers, but Santa Cruz has not.

While both Kramer and Healer say the waiting period averages about six to eight weeks, several recipients told GT it took six months to a year.

“There are some efforts underway statewide to prohibit landlords from this practice,” Jenny Panetta, director of the county’s Housing Authority, tells GT via email. “But we are focusing our efforts on incentivizing landlords to give the program another look.”
“There’s a lot of misinformation about Section 8,” says Phil Kramer, the interim director of HSC. Incentives for landlords to choose Section 8 candidates include competitive prices, which keep up with market rates, and the fact that HUD directly deposits money into the landlord’s account.
There are currently more than 2 million active HUD vouchers throughout the nation, Panetta says. Santa Cruz County has about 4,500, of which about 4,200 are “leased up,” according to Panetta, meaning they’ve already found a place to live with the voucher.
Healer says 286 veterans have vouchers through VASH. “About 71 percent are in use, and the remaining are either waiting or at some stage of the process of obtaining a voucher,” she says.
In the struggle for affordable housing, veterans have been given an extra helping hand with the “Be a Hero: Help A Hero” program, announced in November. A collaborative effort between veteran and housing authorities, the program aims to house 193 veterans by the end of 2016.
Kramer estimates the shelter is currently working with about 150 people who are looking for housing, 90 percent of them with vouchers from a variety of places.
The application process for Section 8 vouchers is often mired in bureaucratic red tape, and it can take months for applicants to be notified if they qualify. While both Kramer and Healer say the waiting period averages about six to eight weeks, several recipients told GT it took six months to a year. When the voucher comes, the work continues.
“Once you get the voucher you have 60 days to find a place,” Steffen says. “Which just isn’t realistic in Santa Cruz.”
After those two months, voucher holders can apply for two additional 60-day extensions. Veterans receive an initial 120-day window, twice that of civilians, to find a place, with the same two extensions. If the vouchers do not get used within the time frame, they are recycled to the next eligible recipient. The problem is the waiting list for HCV and Low Income Public Housing is currently closed. According to the Housing Authority’s website, it is unknown when the waiting list will be reopened, and as of May 2015, 4,800 households were waiting to get on the list.
Section 8 vouchers cover only part of the rent, and recipients are told to spend roughly 30 percent of their income on rent. That means that if someone has an $800-a-month income, but a $1,200 room, the voucher holder generally pays only $240, with the federal government paying the other $960.
Administrators like Kramer are bewildered by the reluctance of landlords to take housing vouchers for rentals. He suggests that maybe some landlords are frightened by the prospect of mandatory property inspections that come with renting to someone on Section 8. “But this is done by the Housing Authority, not the city or county. Basically they are seeing if it’s safe and lives up to basic living standards,” he says. “They are not looking for [building] code violations.”
Steffen says that no matter what, his plan is to “just keep on looking.”
“We’re often told by caseworkers not to ask [prospective landlords] if they take Section 8,” he explains. “It’s easier to just take the application and tell the landlord after you return. You’ll have a better chance, but still not much of one.”