.Torched Pride Flag is Latest in Hate Incidents at Cabrillo and UCSC 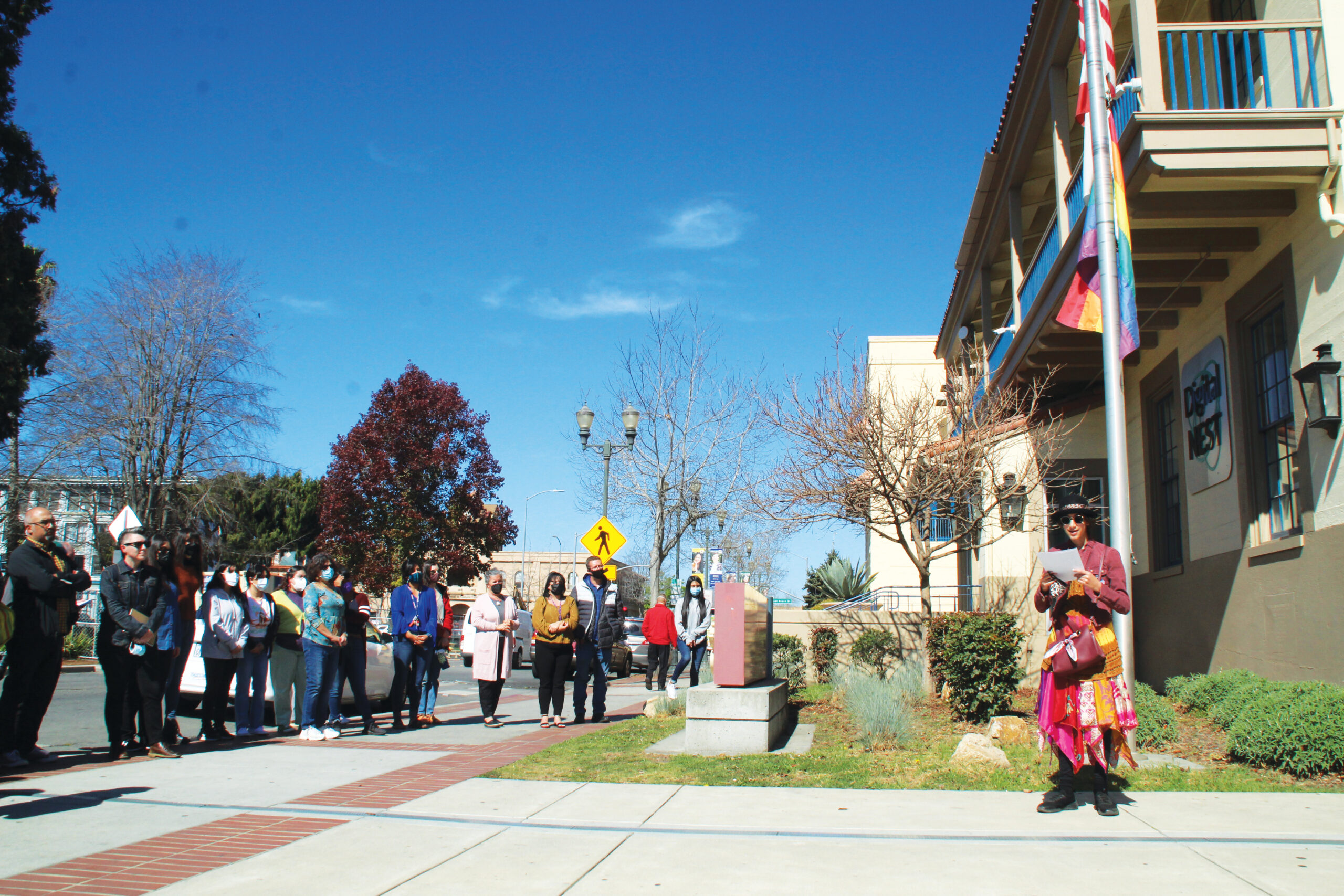 A large group of people gathered in front of Cabrillo College’s Watsonville Campus Monday to watch as a new Pride flag was raised, two days after someone burned the rainbow flag that previously flew over the El Patio outdoor seating area.

“We see you, we hear you, we are here to protect you,” she said. “This is my community, this is my district and this is one of the only places in the world that I feel safe.”

According to Cabrillo President Matt Wetstein, a student worker found the charred flag next to Building A on Saturday morning.

“This is deeply upsetting, and we take this matter very seriously, as the second act of vandalism and hate to occur on Cabrillo’s campus within the past two weeks,” he says. “It is especially disturbing, because students love that flag, and several students came to El Patio specifically to take their photo with the flag.”

The incident occurred one week after someone scrawled racist graffiti on a bathroom on the Aptos campus, prompting Wetstein to repeat a message he sent out then. There is no apparent connection to that incident, Cabrillo officials have said.

“Cabrillo is a community that values diversity and promotes a safe and equitable environment for all students, faculty and staff, regardless of sexual orientation or gender identity,” he said. “There is absolutely no place at Cabrillo for intolerance nor hatred of any kind. We welcome, support, and stand as allies with our members of the LGBTQ+ community.”

Neither the Santa Cruz County Sheriff’s Office nor Cabrillo officials have specifically stated what the graffiti said. But Cabrillo spokeswoman Kristin Fabos said it was racist and anti-semitic, not anti-LGBTQ.

Those messages are apparently similar to graffiti found at UCSC in two reported incidents of anti-Black, antisemitic and white-supremacist graffiti.

According to UCSC spokesman Scott Hernandez-Jason, the graffiti occurred sometime between March 4 and 5 at Crown and Merrill Colleges, and contained “spray-painted images and words which historically been used to inspire terror and to degrade and dehumanize Black and Jewish people.”

“These symbols have taken on broader white-supremacist meanings in the 21st century, and have also been used against many communities of color. We resolutely condemn this crime,” he stated in a message to the community.

The UCSC Police Department initiated an investigation. Anyone with information is asked to contact the UCSC PD at 459-2231, ext. 1.

It is not yet clear if there is a connection to any of the vandalism.

At the Watsonville rally, Encompass Community Services CEO Monica Martinez said she was “shocked” when she learned about the vandalism.

The turnout, she said, sends a message to the community.

“I think it’s so important that the community shows up and shows youth, in particular, that this is a safe space for them,” Martinez said. “It’s so difficult to be a queer youth growing up.”

Not having the support can have a detrimental effect on young LGBTQ+ people, Martinez said.

“I want to be a part of showing the community that it is a safe space, and that there are allies and friends and people like them,” she said.

Madeline Ciara Aliah, 16, who attends Cypress High School in Santa Cruz, attended the gathering. She said she was frustrated when she heard about the vandalism.

“There are so many things going on right now,” Aliah said. “There is a war going on, on every front, on our right to be us.”

Asked why she made the 15-mile trip to Watsonville, Aliah said, “I’ve gotta do something.”

“I’m guessing there are a lot of people out there who will hear this news and think, ‘Man, one person can’t change anything,’” she said. “But if everyone thinks that, then nobody is going to change anything.”

Cabrillo College Governing Board Trustee Adam Spickler said that any act of violence and intimidation that targets minority groups is unacceptable.

“As an out LGBTQ elected leader at our college, I know how critical it is we make sure every student, staff and faculty member feels safe at our college,” Spickler said. “We will act quickly and courageously to ensure Cabrillo stays welcoming and safe for everyone.”

Spickler also said that the college views the vandalism as a “teachable moment.”

“We will increase opportunities to showcase positive representations of LGBTQ people, history and events at Cabrillo,” Spickler said.

“This is a senseless act of vandalism and it does not represent the caring spirit that is so prominent at the Watsonville Center,” he said. “We reject these acts of hatred and want students to know that Cabrillo is here for you as a safe space and a place of friendship and support.”