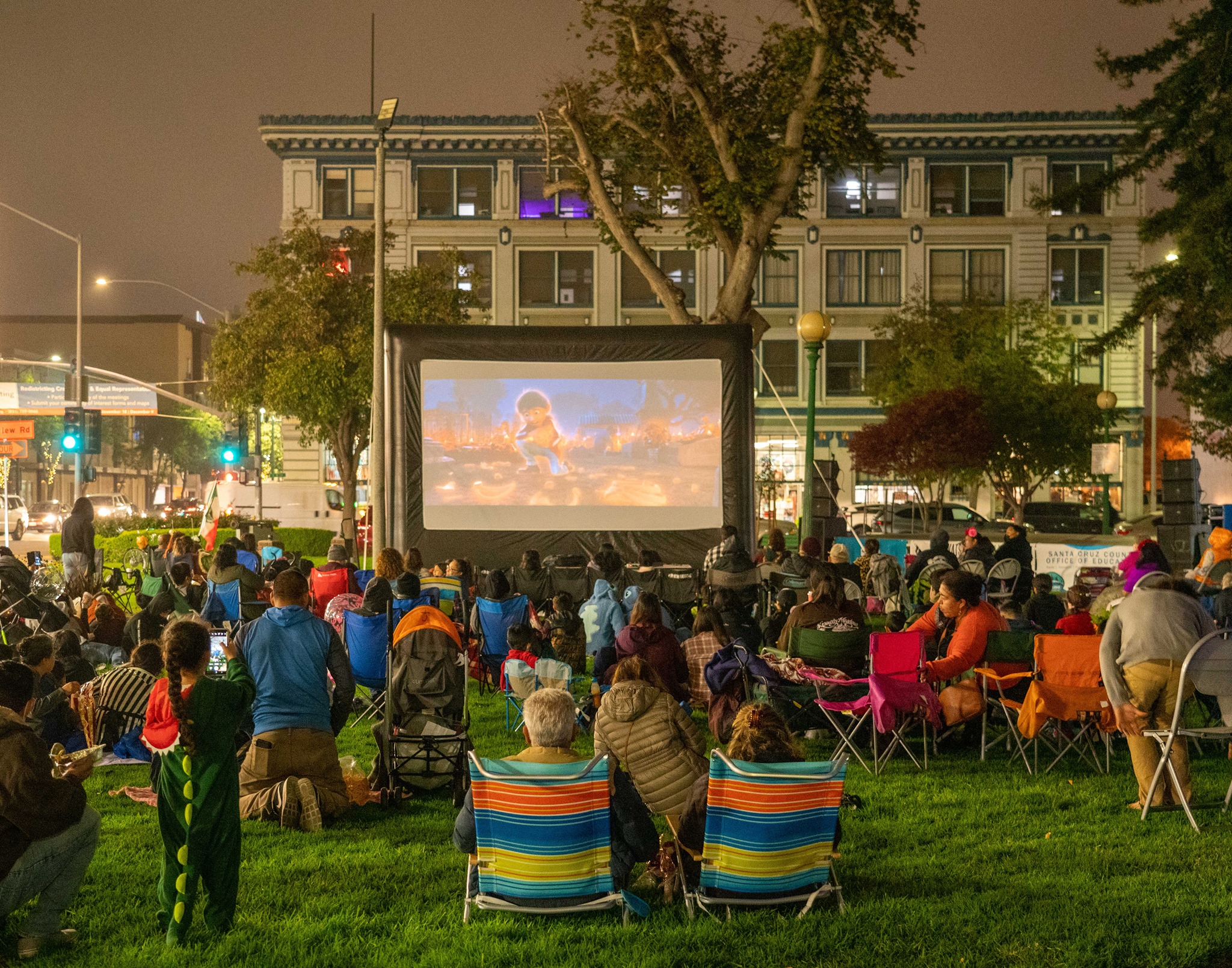 A decade ago, a sold-out crowd gathered at the Henry J. Mello Center in Watsonville to enjoy films, promote filmmakers and celebrate the local arts community.

The first annual Watsonville Film Festival (WFF) was supposed to be a one-time event. But its success ignited interest in both organizers and South County residents who attended.

The festival’s reach has continued to grow every year; a single festival has transformed into a year-round nonprofit that hosts events and works closely with other organizations, schools and businesses.

“I am incredibly proud, and grateful for our team,” Alba says, “and for everyone who has been involved in this organization for all this time, but all the new faces as well. It’s just a really, really wonderful feeling to get to this point.”

WFF’s 8th annual festival was one of the first in-person events in Santa Cruz County to be canceled when Covid-19 hit in March of 2020. So the group shifted its focus to virtual events, eventually creating its very own streaming channel in 2021.

“[Going virtual] was very hard, we had never done it before,” Alba says. “In 2020 we experimented with different formats, and then we started working with our own platform. We’ve been learning a lot in the process.”

The shift to online has resulted in WFF’s viewership expanding exponentially.

“We are reaching more people than ever,” Alba says. “Beyond Santa Cruz County, beyond Monterey Bay, even beyond California. Our program is attracting a lot of attention.”

Virtual screenings continue to be a part of this year’s festival, which kicked off Friday and runs through March 20.

Brenda Avila-Hanna, who works for WFF’s Artist Development and is a member of the Programming Team, says she is glad they are keeping some of the programming available online for free.

“We got a lot of feedback that by doing that, we addressed some other issues,” Avila-Hanna says. “Like mobility: Sometimes people cannot attend for different reasons. They might be working, or maybe there isn’t a bus route that can take them there.”

Additionally, going virtual has allowed WFF to make its Q&A sessions and other materials completely bilingual.

“We heard from people who were watching films with different generations within their families,” Avila-Hanna says. “We’re excited to continue that tradition. To have a little bit of what the festival was before, and what is shaping up to be its future.”

More than 30 full-length and short films are now available to watch for free online at watsonvillefilmfest.org. Many are locally made, via places such as Digital NEST, and a handful are set in Watsonville.

One such film, Fruits of Labor, follows a Watsonville teenager named Ashley who is balancing school, applying for college and personal life while also working in local agricultural fields and factories to help support her family.

Directed by Emily Cohen Ibañez, the 2021 documentary had its world premier at the South by Southwest film festival in Austin, TX last year, and has impressed audiences and critics alike across the U.S.

“I love coming-of-age stories, but I didn’t see those afforded to women of color, especially working women of color,” Ibañez says. “I wanted Ashley to be her full self as a teenager. This is an unusual film about farm labor. People are used to seeing historical icons, or very issue-driven films that focus on social ills. Sometimes what can happen is that folks of color can become stand-ins for social problems.”

Ibañez called working with Ashley and her family “compelling.”

“The love between them just jumps off the screen,” she says. “She is doing farm and factory labor, but she’s also a teen who has a sense of humor, who falls in love for the first time, going through teenage angst as well as these huge burdens she’s having to manage that no teenager should.”

Ibañez said that Ashley and her family are excited that the film will be featured at WFF.

“She’s overjoyed, it’s just really exciting. WFF is a wonderful festival, but it’s also the hometown of the film,” Ibañez says. “There is so much hometown pride with this festival, and we’re honored and excited to be part of it.”

Other films include The Mole Agent, an Academy Award-winning documentary from Chile about an elderly person who takes a job as a detective inside an assisted-living facility; and Treasures, a film from Mexico about a family who moves from the city to a small fishing town, where they connect more closely with each other, the community and the environment.

Short films include the world premiere of Watsonville-based filmmaker Gabriel J. Medina’s Disposable, which tells the story of two undocumented laborers fleeing a civil war in Mexico, who find work in the U.S. during a global pandemic, only to discover they’ve been lured into a frightening situation.

“We have an incredible lineup, the selection of films is very strong this year,” Alba says. “And most of the films are directed by women—which is really exciting, because these are important stories we rarely see.”

Having an in-person component to the event was also important to organizers, especially after three years without one. On March 12 at 6pm, WFF will host an opening night event at the Mello Center, screening the award-winning film Real Women Have Curves, directed by Patricia Cardoso, which is celebrating its 20th anniversary.

The story follows a young Mexican-American woman (America Ferrera) on the cusp of adulthood.

“It is a really important American indie film,” Alba says. “It was very influential. It broke ground in 2002 by focusing on a young Latina immigrant in L.A., on her dreams, inspirations and self-love. It challenged all Hollywood conventions at the time. Our hope is to introduce this film to a new generation of Latinas.”

The screening will include a special appearance by playwright and screenwriter Josefina López.

WFF will also introduce its first cohort of Cine Se Puede fellows at the event. Cine Se Puede, launched last year, is a fellowship aiming to support emerging local filmmakers, assisting with funding of up to $1,000 per project. Participants will learn to pitch stories, improve proposals, budgets, marketing and distribution plans and more.

Fellows will have the chance to pitch projects to experts at the festival.

“There is an amazing educational pipeline here—Digital NEST, Cabrillo, local universities,” Avila-Hanna says. “But once filmmakers try to make it professionally, they either have to leave our region and we lose all that talent or opportunity. Or they stay, but it can feel very isolating. We’re trying to change that.

Avila-Hanna says she was “very excited” about the first cohort.

“They are all incredibly talented and resilient,” she says. “Many have been working here for years, some have screened their work at the festival. We have seen them grow from students to this professional stage. They are very intentional about working in the region. They really represent the essence of our festival.”

Alba said that the seven filmmakers will be working closely with WFF and each other for the next 13 months.

“We’ll have more opportunities to support these filmmakers after the festival,” she says. “But this way, people can recognize them as the inaugural fellows.”

Avila-Hanna says that Cine Se Puede, as well as the fact that WFF is free and easily accessible to all, makes it stand out.

“Our hope is that we continue to shift the culture around film festivals,” she says. “Reimagining what they could be, with a different audience who is not traditionally catered to by these events. Reimagining who goes to walk the red carpet, who gets to connect with other filmmakers, experts.”

The festival is also collaborating with PBS’ award-winning documentary series POV, which Alba says will help promote the festival within its networks.

Alba said she is grateful to be back in person, at least for part of the festival, to celebrate 10 years.

​​“We invite people to come to the [March 12] event early to reconnect,” she said. “We haven’t been able to see people in this setting for so long!”

Alba added that WFF will be taking a number of Covid safety protocols at the event.

“We take the safety of our audiences very seriously,” she says. “We have a team dedicated to making sure we know where we stand with Covid and what the health department recommends.”

Looking ahead, Alba said her hope is that WFF will help make Watsonville become a hub for filmmaking, fostering both seasoned and brand new filmmakers and allowing Latino artists to feel supported and inspired.

“My hope is that we continue our program, that we can celebrate the great stories and artistry of Latino filmmakers for years to come,” she said. “And that our festival brings people to Watsonville. We’ve always been about promoting the talent, the potential, the economic development of Watsonville. We want to put it on the map as a place to watch amazing films.”

The Watsonville Film Festival will be held March 11-20. To register for the March 12 event, find a full schedule or donate to the organization, visit watsonvillefilmfestival.org.

Next ArticleFerrari Florist Moves into the Historic Farmers Exchange Building