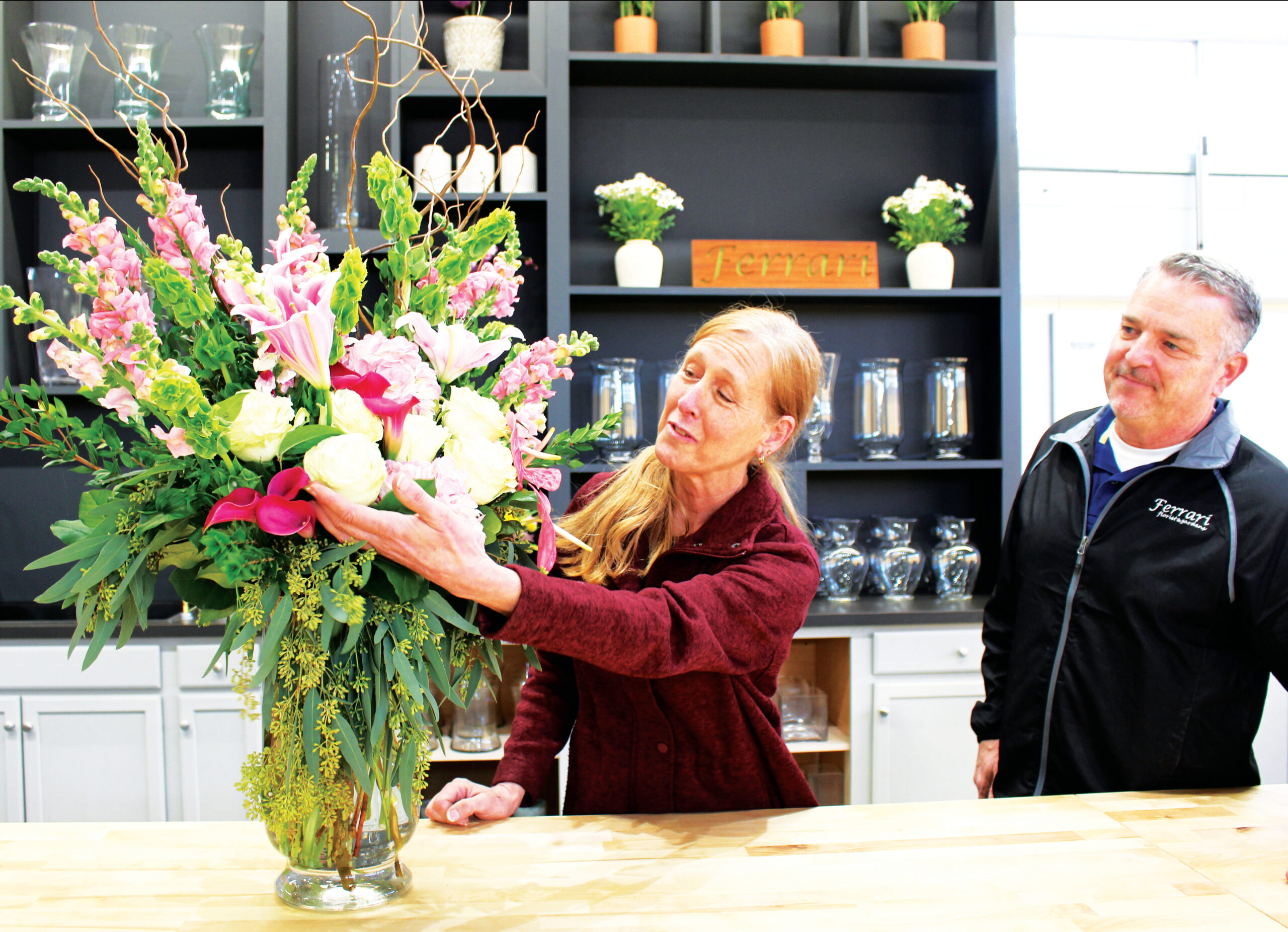 It has been 75 years since Dave Ferrari first opened “Ferrari the Florist” on Pacific Avenue in Downtown Santa Cruz.

It was 1946, just after the end of World War II, and the shop quickly gained a reputation for its quality flowers, window displays and friendly customer service.

Through its extensive history, Ferrari Florist, as it’s now called, has persisted—and remained important in the lives of Santa Cruz County customers.

“They’re all so loyal,” says Brian Piazza, who now owns the store with wife Marilyn Piazza. “They go gaga over Ferrari. They all have stories to tell—historic stories, from long before I was involved.”

The Piazzas purchased the longstanding business in 2016 after it had gone up for sale. They knew of its legacy, plus the shop had arranged the flowers for their own wedding more than three decades prior.

Since gaining ownership, Brian and Marilyn have expanded Ferrari’s reach by opening satellite locations in Scotts Valley and Watsonville. The stores sell mainly locally grown flowers and plants, and they also aim to be environmentally sensitive, working with local organizations to create arrangements to attract butterflies, honeybees and other pollinators.

“We’re trying to get our minds around it,” he says. “Owning a business that has been around for so long … it’s incredible.”

The Piazzas are in the midst of relocating and expanding their current flagship Santa Cruz operation on Soquel Avenue to the 100-year-old Farmers Exchange Building on River Street. Brian says he had been driving by the iconic building when he noticed it was available.

“We called the landlord, he says they’d been going through a big selection of possible businesses,” he says. “There were pot stores, mattress shops, franchises, chains. But they were being very selective about who went in there.”

When Brian pitched bringing in Ferrari, the landlord called the owner of the building, who was immediately on board.

“Apparently the owner says to them, ‘Do whatever it takes to get Ferrari Florist in there—that’s exactly who we want,’” he says. “That was nice. We didn’t have to struggle too much for it.”

The large red building, located next door to Patagonia, is triple the old shop’s space. Brian says that Soquel Avenue space is too small to meet current demand, and can be frustrating for employees who have to navigate a cramped back room.

“It’s also tucked in on a blind side of the street,” he says. “No one can really see us.”

The new store, which held its soft opening on Feb. 28, will eventually include everything from a wedding/event consultation area to a plant and garden store similar to the one at their store in Watsonville. They will hold classes in the store as well, on floral arrangement and succulent garden planting. An ADA-accessible Dutch door will act as a walk-up window for curbside pickup.

The soft opening will soon be followed by a grand opening and possible 75th anniversary celebration in the spring. The Piazzas are coming down from the hustle and bustle of Valentine’s Day, one of the busiest times of year for florists.

“It’s really exciting,” Brian says. “This business has always been about our customers. Their enthusiasm is what motivates us. It’s not about monetizing things—this is about demand. They want more.”

Despite ongoing challenges, such as the nationwide labor shortage, supply chain issues and high costs, Brian says they are excited to be moving forward with the expansion.

“Santa Cruz has been getting a lot of bumps and bruises,” he says. “Lots of businesses are moving away. For me, though, we’re investing in this community with this move. We’re one of the originals. So we’re going to stay right here.”

Next ArticleOpinion: The Watsonville Film Festival Delivers on its Promise