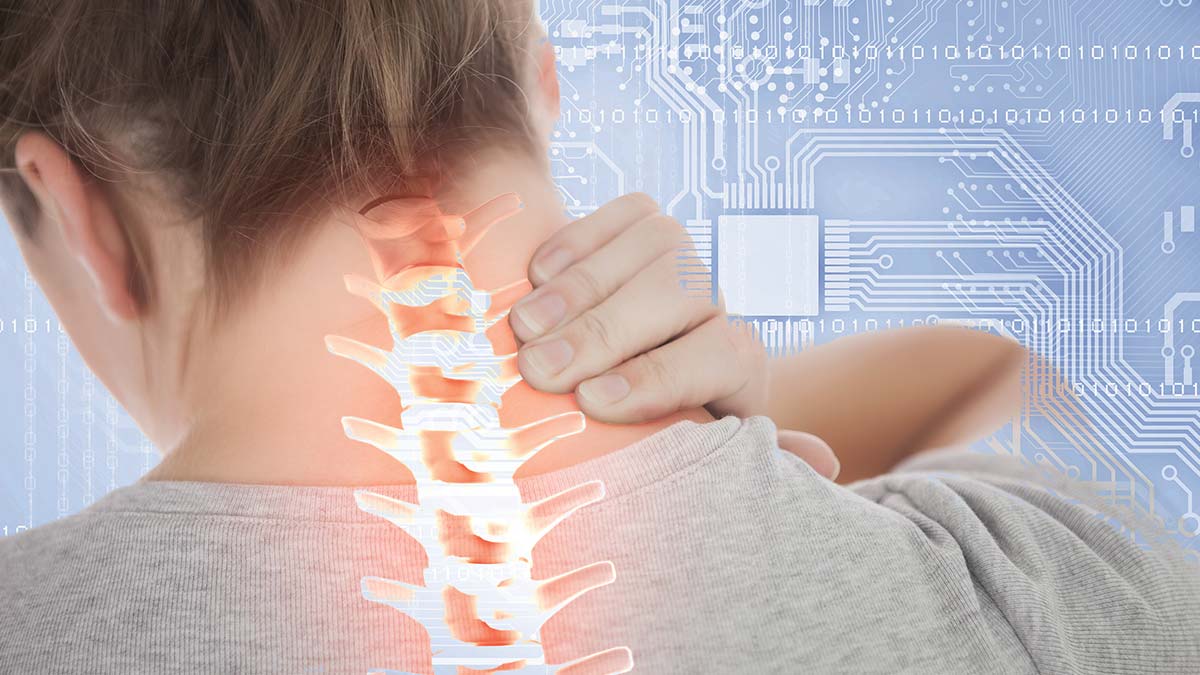 Technology is everywhere: It’s in the checkout line at Trader Joe’s, glowing in the dark after bedtime, tempting us while we’re stopped for a red light—it even creeps into our bathrooms while we’re sitting on the toilet.
But what is our attachment to our phones doing to our bodies and brains? Well, let’s start with the latest medical phenomenon you should probably know about: text neck.
“Think of it as whiplash at zero miles an hour,” says local chiropractor Michelle Bean, co-founder of the Santa Cruz Challenge. “It’s the shortening of certain [neck] muscles, [while] muscles on the other side of the body get inhibited or elongated. If they’re chronically elongated and inhibited the body turns them off at some point.”
So how relevant is this to anyone who relies on texting as their main form of communication with friends?
“I look around all the time and see people with their heads hanging over their shoulders and it’s sad. I worry,” says Bean. “What’s going to happen with this next generation coming up?”
To experience the healthy, all-too-rare sensation of a straight spine while reading on a mobile device eye, or other screen for that matter, we should raise it up to eye level.
“With text neck, you’re constantly looking down at your tablet or cell phone, and nodding, sitting on the couch, on a chair. You do it hundreds of times a day over the course of years and suddenly your body’s breaking down,” says UCSC’s Campus Ergonomist Brian MacDonald.
Social psychologist Amy Cuddy recently brought the text neck concept—also referred to as iHunch or iPosture—into the national discussion with her Dec. 12 article in the New York Times, which presents this previously underreported fact: “When we bend our necks forward 60 degrees, as we do to use our phones, the effective stress on our neck increases to 60 pounds.”
“That extra weight will either go directly into their neck or transfer down, often to a weak link in the spine,” Bean says. “Sometimes they’ll feel it all the way down their back into the hips.”
The problem is growing, and fast—a 2013 study on the health effects of smartphones and portable devices in 1,049 people found 70 percent of adults and 30 percent of children surveyed reported musculoskeletal symptoms in the body, according to the Department of Rehabilitation Sciences of the Hong Kong Polytechnic University and the Hong Kong Physiotherapy Association, which collaborated on the study.

The physical effects of the now ubiquitous iHunch can creep up slowly, and sometimes people don’t realize that the jaw, wrist, elbow or lower back pain they develop is caused by poor posture in the neck and shoulders.
“What it ends up doing is putting a lot of load on the [spinal] discs,” says Bean. “The disc is designed to absorb load when you put stress on it, and it ends up kind of moving the stress to the front of the disc, squeezing the disc so you can get cracks in the disc or a herniation, disc bulges, bone spurs.”
And that’s just talking about the spine, says Bean. “Other things like lung capacity gets bound because you’re closing down the lung space. Problems with digestion is one we really see. You’re also squeezing down on the abdominal cavity,” says Bean.
The saddest thing about these negative physical impacts is that they’re so easily preventable, says Bean. Most people aren’t yet cognizant enough of the problem to make a change.
Bean and MacDonald both report seeing text neck affecting young people, in a way never seen before, and that there’s a significant gap in education on how to maintain good posture—both at school and in the workplace.
Bean works on patients who come into her practice with complaints of pain, once things like text neck have already set in, while MacDonald’s focus as an ergonomist is to try and prevent those injuries from forming.
MacDonald and the UCSC Environmental Health & Safety Department try to encourage supervisors and managers to report physical effects of equipment as they arise, in order to get funding for ergonomically sound furniture. There’s an altruistic and financial motivation for businesses to do this, too, he says—healthy employees create a happier work environment, but from a financial standpoint, keeping employees in good posture decreases the cost of an injury or hiring and training someone new.
“In the late ’80s, late ’90s, computers started showing up in a big way. Before then it wasn’t recognized that office work was risky,” says MacDonald, who worked as a chiropractor for 20 years before beginning ergonomics consulting.
“But since around 2000, even in the last five years, we’re experiencing an industry-wide shift,” says MacDonald. “For the first time new employees—young people in their early 20s—showing up within in the first few months experiencing these injuries because they’ve been looking at their cell phones, tablets—and they’ve been doing it since they were 3 years old. We’re seeing a new epidemic of young people with these injuries.”
Straightening up in your chair can help, and guess what, there’s an app for that. The Text Neck Institute—yes, that exists too—launched the Text Neck Indicator app for Android phones to notify cell phone users when they’re holding their device at an unhealthy height.
MacDonald also points out that employers are legally responsible for making workplaces ergonomically safe. The California Code of Regulations stipulates that if one or more ergonomic-related injuries takes place on the job, the employer must institute training, an evaluation and controls to minimize the risk of injury.


Back in the 18th and 19th centuries, good posture was a status symbol—a social signifier of good breeding and etiquette. Most baby boomers were also nagged by their parents to sit up straight, too, perhaps while dialing a rotary phone or opening a piece of mail. But then there are those who grew up with the Internet—millennials with the last remaining memory bridge to the dial-up past—and those born after, into a world of Wi-Fi. Teenagers and young adults have often had bad posture, says Bean, but there’s now far less education about how critical good posture is.
“If you’ve ever seen a one-year-old or two-year-old they’ve got [good posture], because they’re influenced by one thing, and that’s gravity,” Bean says. “Gravity is the number one influencer on the body, so they sit with really good posture, they bend over with really good posture, they stand up with good posture. Those are natural instincts.”
The change occurs when kids reach around 7 or 8, says Bean. These days, that’s the age when children are starting to really use technology, especially for school and homework.
The good news is that there are ways to prevent the effects of bad posture from leading to chronic problems, especially if children start changing their posture habits at an early age. Bean recommends that in order to maintain good posture while seated, bring the shoulder forward, up and back for a roll motion. The goal is to elongate the body, not just pop the chest out, she says.
“You can just get up and walk around the desk, it’s going to make a huge difference,” says Bean. “For people that commute a lot, set the rearview mirror getting into the car and get in a good postural position—and then don’t move it.”
For workstations, MacDonald recommends that all furniture be adjustable, especially the chair and desk, that everything be in close reach, and that the monitor is at a height that maintains a neutral neck position. Listen to music while you work, dance a little—any sort of movement to break up the stagnation helps.

While our mental state can often affect our posture, poor posture can also affect our mental state. In 2010, the Brazilian Psychiatric Association found that depressed patients tend to slouch with the whole body folding more inwardly than non-depressed people. Meanwhile, a study published last year in Health Psychology showed how the moods of non-depressed participants can become much more negative when sitting in a constantly slouched position.
And then there’s the damage to our eyes.
“The eye didn’t develop to stare at a fixed distance for eight hours in a row,” says Santa Cruz Optometric Center optometrist Laura Prisbe.
The problem is so pervasive that the Vision Council even came up with a name for it: Digital Eye Strain. And with nearly four out of 10 millennials spending at least nine hours on digital devices every day, it’s something to pay attention to, says Prisbe.
“That muscle that controls focusing, by being locked in the specific distance, gets really fatigued staring at the same distance,” Prisbe says.
That’s how people who aren’t genetically nearsighted or farsighted end up with symptoms of those conditions. But that’s not even the half of it. Prisbe says that staring at one spot also causes us to blink less—increasing eye fatigue—and that the glare from a computer screen  coupled with the ubiquitous aesthetic atrocity that is overhead fluorescent lighting is the ultimate recipe for eye exhaustion.
New research coming to light over the last few years details the effects of “blue light”—that familiar glow on most screens—on the human eye. According to the Vision Council’s 2015 Digital Eye Strain Report, the band of blue-violet light thought to be most harmful to retinal cells falls between 415 to 455 nanometres (nm). Some of the “most favored digital devices and modern lighting” typically start at around 400 nm.
Prolonged exposure to blue light can lead to macular degeneration, especially if you have a family history of it, says Prisbe. “It’s the loss of your central vision. Your macula is the center part of your retina, what you use when you look directly at something,” she says. “With macular degeneration, you get a blind spot in the center of your vision.”
It’s a scary prospect, says Prisbe, who, like Bean, worries most about children spending unprecedented amounts of time looking at screens when the long-term effects are not yet known.
One thing parents can do to avoid future problems, says Prisbe, is make their kids go outside more.
“There’s research that supports that your eye continues to grow if you’re reading up close in poor light—that’s what nearsightedness is, the eyes grow too much,” she says. “With kids who are in natural daylight, they found that having exposure to outside reading was the key in not developing myopia, or nearsightedness.”
For cubicle dwellers, Prisbe recommends anti-glare screens, using artificial tears, and making sure the screen is at least an arm’s length away, the font is at a comfortably large size, the illumination is not at its brightest, and the screen is just below eye level. For those fighting fluorescent lighting, she even suggests wearing a hat or visor. Also worth looking into: a coating for glasses that blocks blue light, and computer-specific glasses to help the focusing muscle relax. For most people, the most important rule to remember is the 20-20-20 rule, says Prisbe: every 20 minutes, take 20 seconds and spend it looking away from your screen at something at least 20 feet away.
“This field is evolving with the research being done,” says MacDonald. “Technology is providing us with new challenges, many people now aren’t working in front of a desktop computer, but they’re looking at their tablet and cell: that provides a new set of static prolonged postures.”