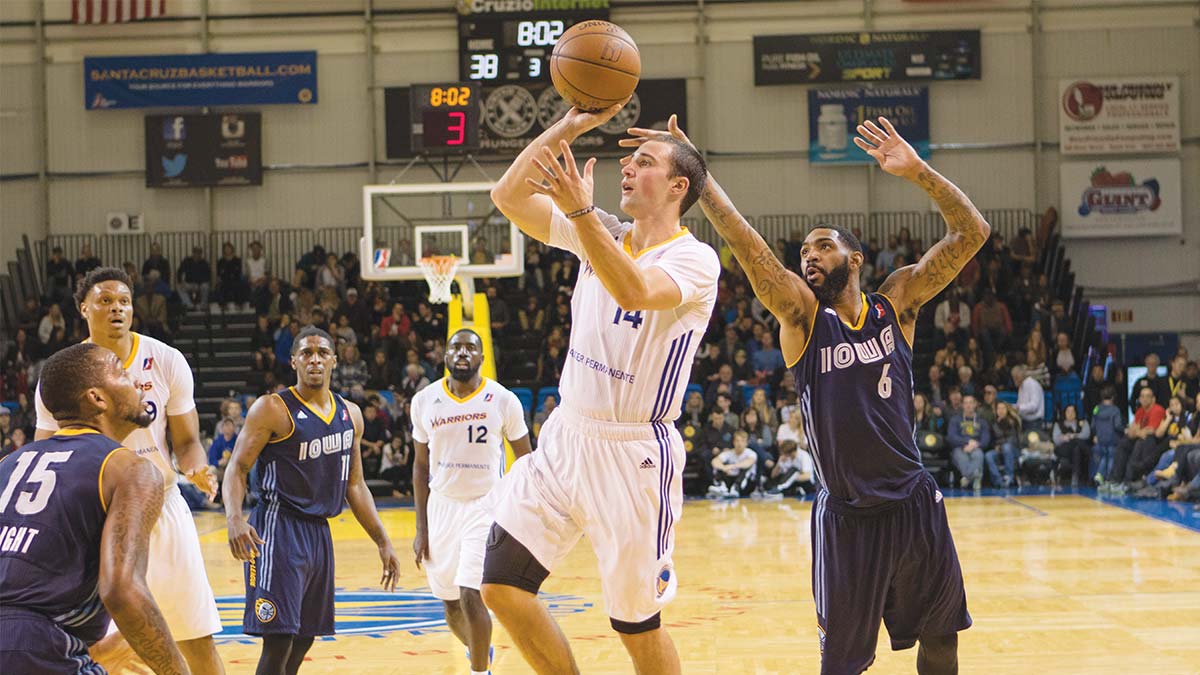 After a recent media chat with Casey Hill, a handful of reporters shuffled away from the Santa Cruz Warriors coach, who remained still and staring at the ground for what was probably only 10 seconds, but seemed like an eternity.
One reporter, perhaps trying to break the uncomfortable silence, asked, “Doing some heavy thinking there, coach?”
“Yeah,” Hill responded quietly. “I’ve been doing that all year.”
His team had just lost at home, in front of an international audience, putting their wins for the season below 50 percent with a performance that could best be described as “lackluster.”
It was the team’s first game of the NBA D-League showcase. Five rows of the north side of the Kaiser Permanente Arena were filled with scouts from all over the world, NBA employees and reporters from the likes of ESPN and the Associated Press. They came to see the up-and-coming talent, and the Santa Cruz Warriors may have choked under the pressure.
“I think what happened is we came out nervous,” Hill said after the Jan. 8 game.
Of course, it would be a wrong to say that a poor performance boils down to only nerves for a team that has now lost the last seven of its past eight games. The team was playing its first game with point guard Aaron Craft, last year’s D-League Defensive Player of the Year, since April. More significantly, the team had just lost guard Elliot Williams—who earned both Player of the Month and Player of the Week honors at the beginning of the season—to a 10-day contract with the Grizzlies.
“Losing Elliot at 28 points a game hurts, and at a certain point, you’ve got to find where those 28 points are gonna come from,” Hill said.
Since that disappointing game, Santa Cruz would go on to lose four more straight games. But it’s too early to sound the alarm for a 10-15 team that just reached the midway point in the season. Forward Kevon Looney, Golden State’s first-round draft pick, has been getting playing time, now that he’s back from his hip surgery. Looney got 11 points, 12 rebounds and two blocks in just 16 minutes. He might help carry Santa Cruz to wins, just as James Michael McAdoo did to help them win the championship last year.
At this month’s showcase, I sat next to a league official, who told me that Santa Cruz has one of the three best environments in the league.
It is a fan base that’s never been tested, though, as the team has been to three championships in its first three years in Santa Cruz, even winning it all and taking home the D-League trophy last year. So, this all begs the question: What happens if and when the winning stops in a league where it’s so hard to have continued success?
Chris Murphy, Santa Cruz’s new team president, says he isn’t too worried, as the organization has done a lot of community work to build a relationship that’s bigger than just basketball.
“You build an affinity with your fan base, and they stay with you through thick and thin,” says Murphy, who notes that Golden State’s diehard following stayed true during 17 miserable straight seasons of missing the playoffs.
In the meantime, Hill says his team needs to come out aggressive early in games.
“This group’s got this strange need to get flicked in the ear six or seven times, and then they wake up and turn around and punch someone in the face,” Hill said at the showcase. “It’s the perfect example of the hibernating bear—fat and happy. And then at a certain point, we wake up and start attacking.”