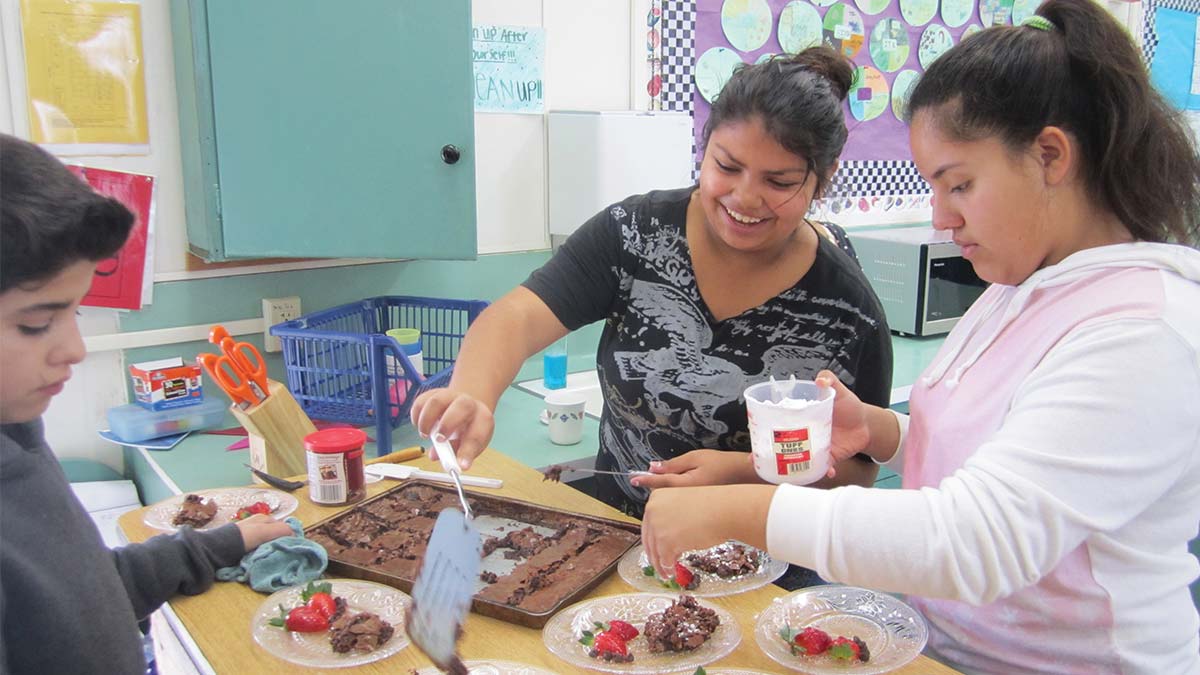 In a race against time, chef Ana Mendoza Rodriguez is searching for the appropriate spatula to scrape brownies off her baking sheet and onto small plates already decorated with strawberries, chocolate chips and a glaze. Yards away, her competitors have been reducing a creamy Alfredo sauce, mashing avocados for guacamole, baking cupcakes and frying malasadas, a fried Portuguese pastry similar to a doughnut or a beignet.
“It was really fun, but we were in a rush,” says Ana, a member of Ms. Sandra Palazzola Jennings’ culinary arts class at Branciforte Middle School.
With one hour to prep, cook and plate dishes, they didn’t leave enough time to bake for 20-25 minutes, forcing Ana and her small team of fellow middle schoolers to improvise.
The dish was still graceful enough to win “Best Plate Design” at the class’s Top Chef competition that afternoon—an honor she shared with teammates Anthony Sundeen, Jennifer Pacheco Martinez and Keidy Mendoza Martinez.
Jennings says that making the best of a bad situation is just one of many skills kids learn through cooking, along with a little science, math, reading, and practical life skills. “It teaches kids how to work in a team. You have to with others in close communication,” Jennings says.  “And we also all need to learn how to cook.”
The award for “Best Flavor” went to Emily Bolin, Erick Juarez Medina, Jordan McCray-Brown, Olivia Amador, and Mai Naughton-Ceja for a ravioli Alfredo dish. Perhaps more important than winning, though, are the connections and skills the students pick up along the way.
“You get to know a lot more people in this class,” Olivia Lackey, a seventh grader offers. “In most classes, you just sit down and learn.” Olivia also learned how to be resourceful, and that you don’t need fancy tools to make good food—for instance, you can whisk eggs just fine using a fork.
“You don’t need the most expensive things,” she says.
In the class, which is officially called Literacy Through Culinary Arts, students start out reading food reviews from newspapers like Good Times and the Santa Cruz Sentinel, and eventually begin writing their own. Jennings has them study rules of etiquette, so they learn how to set a table. There are also cook-at-home projects, writing assignments about food memories, journal entries and assignments on similes and metaphor descriptions of food. There is a small class fee, but no one is turned away for lack of funds. None of this, of course, would be possible without backing of the district and community donors who support the class.

“It teaches kids how to work in a team. You have to with others in close communication,” Jennings says.  “And we also all need to learn how to cook.”

“It comes from the creativity of our district and the willingness to hang on to electives,” says Jennings, who is still grateful after all these years that she was offered to teach the class as a first-year teacher a decade ago. “I will be teaching it until I retire, I hope.”
Kris Munro, the Santa Cruz City Schools superintendent, says electives are important, because they allow students to grow and also help them to lead well-rounded lives. Other school districts took a different approach 15 years ago, she explains, when the since-defunct No Child Left Behind Act became law—effectively cutting their more creative curriculum in favor of basic math and English classes.
“Kids would take three hours of math and three hours of language arts, instead of getting exploratory classes. But we decided to embrace those skills and embed those standards in our exploratory course work,” Munro says.
As a result, the district has a handful of elective classes. Mission Hill Middle School, the district’s other middle school, has 15 electives, including ceramics, stained glass, musical theater, multimedia, and 3D design.
As Jennings is now more than six months pregnant, long-term substitute Kyle Noone has been coming into class three to four times a week to get a feel for the class as he’ll take over next month in the new semester. “It’s a self-driven class,” Noone says. “The kids are just doing. The teacher facilitates it, but the kids make it happen. I love the fact that other teachers come in during their prep [periods] and eat the food.”
After Jennings finishes counting down an hour of cooking, children’s hands spring up from their plates, and the dishes are complete. Next begins the tasting and voting, which all of the students, as well as a few teachers who are in between classes for the day, participate in.
After that, the sound of discussing tasty dishes is replaced with the drone of running water and the swishing of brooms. Out come the 409 spray bottles and sponges. “And this might be the most exciting part—watching kids clean,” Jennings says.
After class, Jennings tallies up the votes and prepares to announce the winners later in the week.
“What they win is bragging rights. I used to give out a $5 gift card to Safeway, but they didn’t really care. What they really want is to be able to say, ‘Hey, I’m Top Chef,” says Jennings, casually lifting her sweater an inch off of her shoulders and shrugging. “Bragging rights are a hot commodity.”