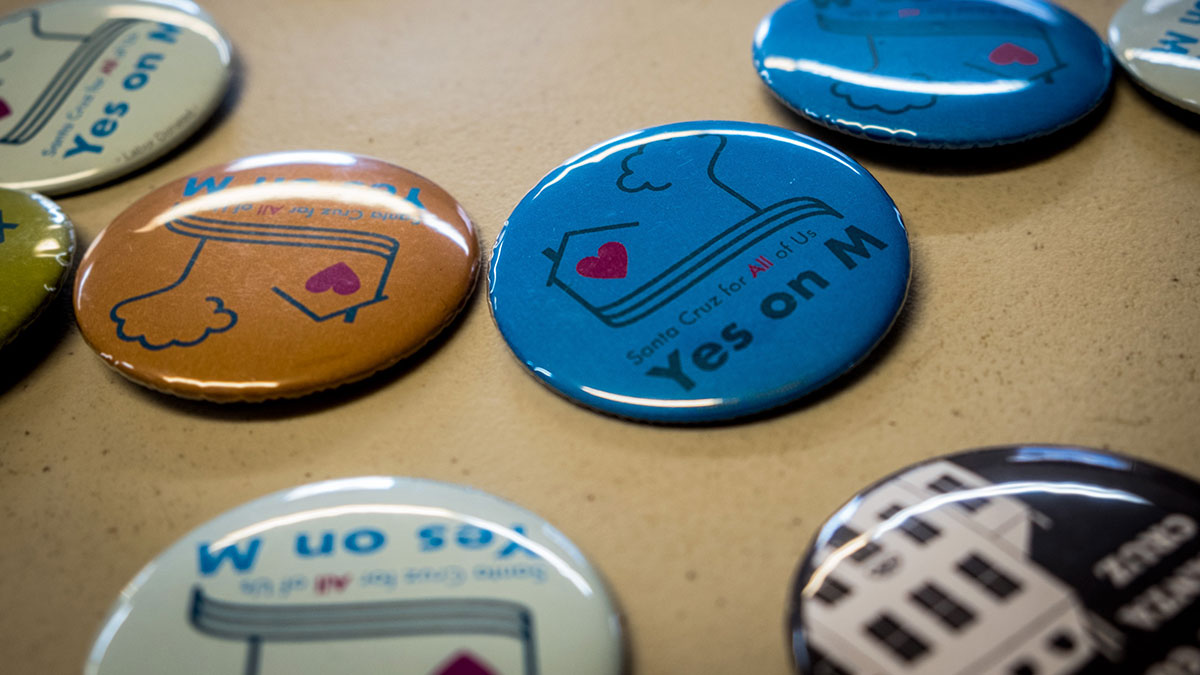 There were the community standbys, like the Homeless Garden Project, SEIU Local 521 and Food Not Bombs. There were also more niche groups: Landlords and Homeowners for Rent Control, Students United with Renters, the Santa Cruz Tenants Organizing Committee, and campaigners for both the $100 million Measure H county housing bond and the Measure M Santa Cruz rent control initiative on the Nov. 6 ballot.

Evelyn Tapia, a 20-year-old sociology student at UCSC, had never been to a housing rally before. She’d secured on-campus housing as a transfer student but was attracted to the “No Place Like Home Event”—named for a new UCSC Center for Labor Studies survey and housing website—after witnessing the strain on Santa Cruz renters that reminded her of growing up in a crowded Salinas apartment with her family of five, often struggling to get by with wages from work in the local ag sector.

“I’ve lived around this. It’s just something that I’m really tired of seeing,” said Tapia, who has heard more recently about families doubling and tripling up to deal with rising costs, sometimes sleeping in closets. “I wanted to get resources that I could share with people.”

The event coincided with a planned Affordable Housing Week and was organized by the Santa Cruz County Housing Advocacy Network, a coalition of groups like the SEIU, Community Bridges, California Rural Legal Assistance and many others. It doubled as an illustration of a growing renters’ rights coalition in Santa Cruz, bringing together students and activists, labor unions, affordable housing developers and property owners potentially willing to risk future financial gains—many for what they say will be a fight well beyond election day to build new housing, preserve existing affordable units and add more legal protections for renters.

There will be a combined total of five city, county and state housing measures on the ballot for Santa Cruz voters on Nov. 6. In addition to Measures M and H, there are two state housing funding measures (Propositions 1 and 2) and a proposed expansion of the types of units cities may be able to regulate under local rent control programs (Proposition 10).

On a stage flanked by a banner with a black and white silhouette of the Monopoly man and the phrase “THIS IS A CRISIS/PICK A SIDE,” speakers on Thursday covered a wide range of factors contributing to a severe lack of area affordable housing: global trends toward buying up once-accessible units as investment vehicles; long-evaporated state and federal funding streams; the unique economics of Santa Cruz as both a vacation rental destination and a relatively small city home to a fast-growing university.

“Scholars compare the housing crisis to climate change,” said UCSC Sociology Professor Miriam Greenberg, who co-organized the “No Place Like Home” study. “There is no silver bullet.”

UCSC students like 21-year-old Los Angeles County native Jocelyne Alvarez, a senior studying sociology who worked on the “No Place Like Home” project since last spring, presented results of the multi-year survey. They included hundreds of people working in Santa Cruz. Among those surveyed, about 45 percent who worked in the city live in the city, they found. While 60 percent of renters spend more than 30 percent of income on rent, the survey also found that 48 percent of homeowners are similarly burdened by high mortgages. Researchers talked to city and county employees, as well as workers from Community Bridges and Salud Para la Gente. Two-thirds of respondents struggled to pay for basics like food or health care.

For Alvarez, the numbers are personal. To keep up with record-breaking rents in Santa Cruz—currently hovering around an average $2,000 for a one-bedroom apartment, according to online rental listing services like RentCafe—she augmented her summer research job with work as a home health aide six days a week, up to 12 hours a day, to pay her roughly $800 share for a three-bedroom apartment split with four other students near the Denny’s on Ocean Street.

“This is another home for me, and I want it to be a home for everyone,” says Alvarez, who changed her voter registration from LA to Santa Cruz in part to vote for Measure M.

SEIU member Cheryl Williams spoke about how even her stable job as a senior clerk for the county’s assessment appeals board hasn’t insulated her from rising costs. Though she’s lived in Santa Cruz since 1979, Williams said she’s had to move four times in the last two years. That includes a recent month-and-a-half in limbo staying with a friend, all her belongings in storage and her adult son with no place to go.

“Cost burden is a big damn deal in Santa Cruz. It has affected me greatly,” Williams said. “There’s trouble in paradise.”

They frame the version of rent control proposed under Measure M as too extreme, since it allows for renters to move in specified family members unlike similar measures in other cities. Anti-rent control groups also contend that new “just cause” eviction protections modeled after those in Richmond and other cities would make it too difficult to remove problem tenants.

Still, campaign rhetoric at the event on Thursday about insidious real estate industry forces profiting off of high housing costs didn’t sit well with all attendees. One woman who said that she is is currently sleeping in a shed while seeking more permanent housing told speakers that, “I don’t think it’s fair to throw the realtors under the bus.”

One landlord who spoke, Jack Jacobson, a board member of Community Bridges, said he supports Measure M after operating buildings in rent-controlled jurisdictions like West Hollywood without issue. He also has personal motivations.

“The most interesting people in Santa Cruz can’t live in Santa Cruz anymore,” he said, noting that many friends, especially artists, have been forced to move to cheaper cities.

Speakers discussed several potential political, social and economic models to add to local housing inventory and curb displacement of current residents. Aside from rent control, funding and stronger legal protections for renters, there was talk of more building on public land and whether UCSC might sign a memorandum in the mold of UC Davis, which in September committed to adding housing for all new students and employees in Yolo County.

For now, Diana Alfaro, a project manager with affordable housing developer MidPen Housing, said that capacity has already been far exceeded for the few new income-restricted units that have been built in recent years.

“We received 2,500 applications for 46 units,” Alfaro said of the most recent of the developer’s 13 projects in Santa Cruz County. “Things are not getting easier. They’re getting worse.”