.Ukrainians in Santa Cruz Mountains Worry for Home Under Siege 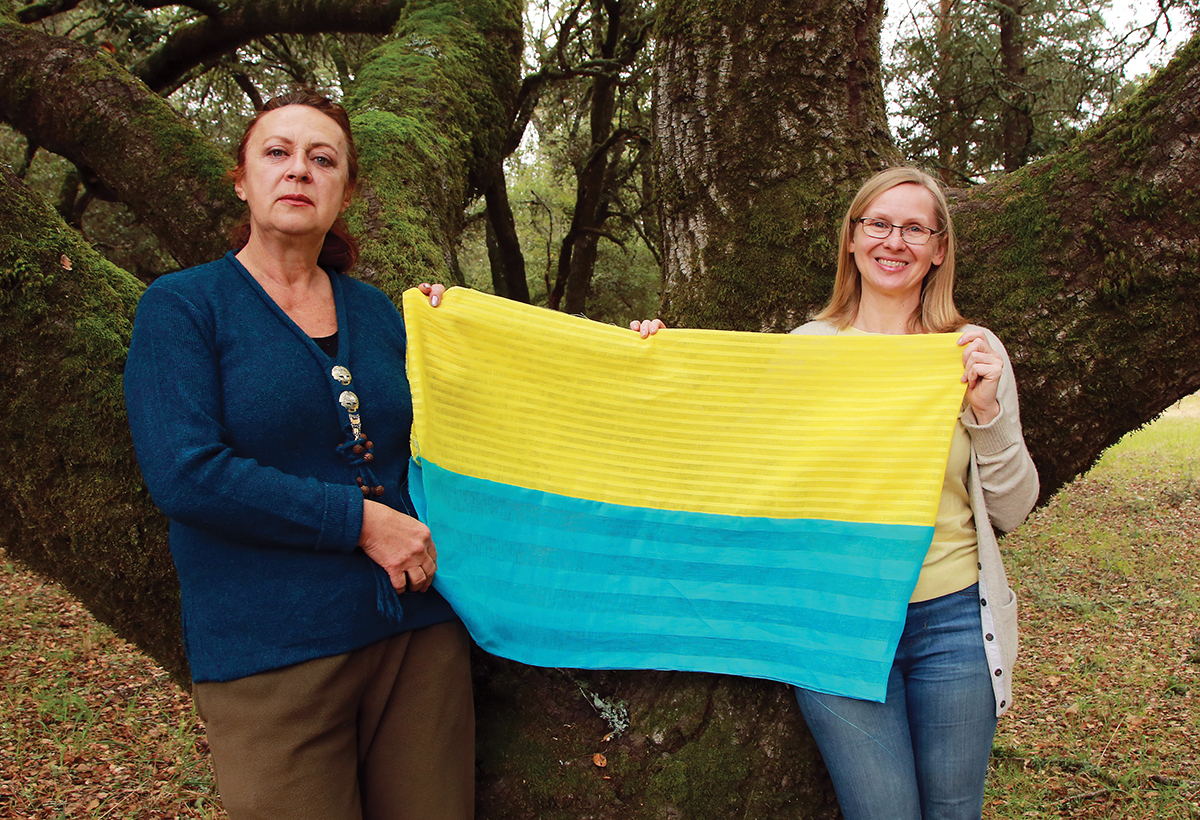 Helen Bieliaieva, 65, normally lives near the railway station in the center of Kyiv.

But she’s been in Santa Cruz County visiting her Ukrainian friend Julia, 49, since October.

“She cannot go back,” said Julia, who asked we don’t use her last name, out of fear of reprisals from people who are supportive of Vladimir Putin.

“I don’t know what happened with my house now,” Bieliaieva said, explaining that one bomb already landed 800 meters away from her house, and another about a kilometer away.

On Tuesday, the Santa Cruz County Board of Supervisors unanimously adopted a resolution condemning the “unprovoked invasion of Ukraine.”

“The situation in Ukraine is heartbreaking and a real threat to democracy and human rights around the world,” said 3rd District Supervisor Ryan Coonerty, who represents the North Coast and Bonny Doon. “We needed to raise our voice.”

In the interview, on March 4 Bieliaieva said it felt strange to hear news reports that Russia was planning an invasion.

“They say the date there will be an attack on Ukraine,” she said. “I didn’t believe it.”

While she feels lucky to be in the United States, she also finds it frustrating to be stuck here when there’s so much going on over there.

“I would like to go to my town and to help my people, you see. But I can’t,” she said. “I want to help territorial defense. I can make food.”

Julia describes the feeling as more akin to guilt than relief.

“I can’t eat; I can’t sleep; because every minute we are waiting for new bombs, you see?” she said. “But we do what we can do.”

And on March 3, with the invasion in its second week, Bieliaieva got an idea. While in Julia’s workshop, looking at her friend’s assortment of fine linen, she wondered, Why not make scarves in the colors of the Ukrainian flag and sell them? Julia loved the plan and suggested they send the proceeds to Bieliaieva’s Prague-based daughter, who volunteers for an organization that helps Ukraine’s territorial defense forces.

Julia said she boils the scarves in order to create a bunched-up texture that looks quite trendy.

According to the Santa Cruz Mountains resident, there are at least seven Ukrainian families in the Bonny Doon area alone.

Anna Usatenko, 31, accounts for one of those households.

Her sister was in Kyiv but managed to evacuate to a safer part of the country the day after the invasion began on Feb. 24. But she still has friends in the capital.

“I got a lot of texts from them recently,” she said. “If Putin will occupy Ukrainian part, it will be like whole Ukraine under Auschwitz.”

On March 1, one of these texts arrived from a friend in Kyiv, whose dad lives in the Zaporizhzhia area, reporting he came under Russian gunfire.

“They shooting on his vehicle, and his friend passed away in the vehicle—but her father is alive,” Usatenko said. “She was angry, and I was angry.”

Usatenko did what she could to provide emotional support to her friend, but is all too aware of just how tenuous the situation is.

“You never know what can happen any day there,” she said. “The sky is not under control; we don’t have the weapons that can stop the bombing.”

She was disappointed NATO has declined to impose a no-fly zone over Ukraine.

Bieliaieva says the spirit of her fellow citizens won’t be extinguished by a few bombs.

“Ukrainian people think it’s better to die than live in a concentration camp,” she said. “Because Ukrainians will never be slaves.”

She smiles as she thinks back to the Euromaidan movement, the winter 2013-14 wave of civil unrest where demonstrators pushed for closer relations with the European Union. It started just down the street from her house.

“I was very active,” she said. “Scary, but I have my temper. And I’m free. And I don’t want to be slave—and I help all people in Maidan.”

During the protests, people would sleep outside in the public square, even though it was around negative-5 degrees Fahrenheit out.

“And for what they need—some blankets, food—I help them,” she said. “Every day I was in Maidan.”

She is trying to get her U.S. visa extended, hoping she won’t have to seek refugee status. Her burning desire to return is evident.

After all, Bieliaieva’s 71-year-old sister and her 77-year-old husband are still in Kyiv.

“Now they hide in subway station,” she said.

“They are sitting in the basement,” she said, showing a photo they sent of a makeshift barricade made of assorted materials like cardboard, sticks, a pole and a pallet. “They are trying to protect their windows.”

Along the North Coast in Davenport, Joel Sorto, 42, directed his brother Noe Sorto, 40, and Jose Reyes, 28, a co-worker, as they affixed hearts made out of corrugated metal—and other symbols—to a fence.

They’re from Central America, not Eastern Europe, Joel points out. But even though they don’t know any Ukrainians, themselves, they felt it was important to do something creative to show solidarity with the people over there, Joel explained.

“We’re just trying to be creative and to support,” he said. “We spent all week making them.”

They got the reclaimed metal from a woodshop in the Santa Cruz Mountains. And they used redwood cut from Bonny Doon trees to fashion petals for some of the sunflowers, a symbol of peace and Ukraine’s official flower. Installing the wooden ones proved a welcome addition, since cardboard flowers they’d put up the previous day showed signs of “wilting” from overnight rain.

The crew even painted a large Ukrainian flag with a dove at the center.

It now hangs from a picturesque dilapidated building, the site of some of the most visible messages to first responders during the aftermath of the CZU Lightning Complex fire.

“This is pretty much all you can do,” he said, considering the plight of those trapped in war’s clutches on the other side of the globe. “It’s really sad.”