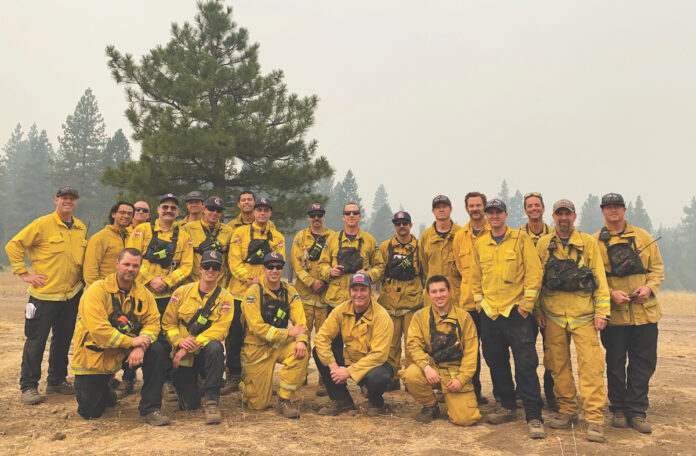 When Zayante firefighters got the call at 7:11pm on Aug. 4 that their services were needed on the Dixie Fire, they had just hours to pack and deploy.

It would be two weeks of grueling attacks, sleepless nights and ever-present danger, battling what would turn out to be the biggest non-complex fire in California history.

“You’re driving up to these neighborhoods and both sides of the road are on fire,” said Zayante Fire Protection District Capt. John Amadeo, who served as an engineer on the mission. “It is always such an ominous feeling.”

The Dixie Fire sparked on July 13—possibly due to vegetation connecting with power lines—and began burning through Butte, Lassen, Plumas, Shasta and Tehama counties. It merged with the Fly Fire, which started July 22, fueled by the state-wide drought, hot weather and windy conditions.

Over 103 days the Dixie Fire would burn more than 963,000 acres. But when the volunteer crew from one of the state’s tiniest departments set out, they didn’t know they were about to become part of history. They weren’t unaware of the risks, either.

Joining Amadeo were two other Zayante firefighters, all three operating under Capt. Todd Kraft, who’s been with the department since 2010.

Together, with other departments from around the region, they formed “XCZ-2326-C”—the Santa Cruz County strike team—which included crews from Watsonville, Santa Cruz, Aptos and La Selva Beach, with Josh Coleman, of the Santa Cruz Fire Department, in command.

They set out into the night toward Chico, arriving at the Silver Dollar Fairgrounds, in Butte County, hours later. They had a window of three hours to sleep, before rising to receive their directive in the morning.

“You’re waking up not quite knowing what you’re going to have in front of you for the day,” Kraft recalled. “For many, there’s a nervousness, and yet excitement at the same time.”

XCZ-2326-C was sent to the northern section of the expanding fire mass, termed “Division Lima.”

At first, the Zayante team was assigned to protect structures and patrol vulnerable areas. They removed weeds from around houses, took loose firewood from decks and re-stacked it in a safer location, and reorganized furniture that could be an ignition site if an ember were to land. Meteorologists were predicting extreme fire activity.

Duties in the overarching battle against one of nature’s more potent forces are often mundane, and when you’re successful, and fire is beaten back, it’s usually not very dramatic.

In the face of Dixie’s overwhelming vigor, the Zayante crew set to the daily grind of structure protection, stringing hose along mountainous terrain and cleaning up after triumphs.

“You don’t always see the fire, but you can hear it,” Kraft said. “It sounds like a roaring train.”

One day, about a week into their deployment, the crew was assigned to protect a group of remote houses in a valley surrounded by plenty of dry fuel that could easily burst into flames.

As the engineer, Amadeo set to pumping water from a 4,000-gallon water hauler into an orange-hued 3,000-gallon receptacle called “the pumpkin”—and onto their 500-gallon engine.

He stopped counting after dispensing 20,000 gallons.

“The water I was pumping was to put out the edge of the fire,” he said. “The fire was coming over and burning down towards us, and there were a bunch of houses in that vicinity.”

Meanwhile, firefighters launched a “backburn,” ignited controlled burns in tiers, starting at the top of the hillside.

“We were able to burn out the fuels behind these houses,” Kraft said. “We were fighting fire with fire.”

After working through the night, they swapped out with another crew. Flames ultimately did end up sweeping through the area, but while plenty of structures were devoured, the cabins and houses the Zayante crew helped fortify, ended up surviving, Kraft said.

“If we had not done that, the fire would have come down the mountain and taken out these houses and cabins,” he said.

In another assignment, the crew was sent to roll out hoses down steep terrain.

It was nighttime and an inversion layer had compacted smoke into the valley.

Kraft remembers the menacing sound of the trees falling all around them.

“It’s not the ones you can see; it’s the ones you can’t see that are scary,” he said. “You hear them hitting the ground with a thunderous roar, and you’re just hoping none of your crew are nearby.”

At one point a tree collapsed just yards away, and they had to use chainsaws to clear the way forward.

“Where the apprehension comes in is when the tree actually falls on the trail in front of you,” Amadeo said. “You’re worried about Tree No. 2.”

Seemingly no sooner than they’d laid out all that hose, they were asked to collect it—another result of successful fire suppression. But just because the fire had receded, that didn’t mean things weren’t dangerous.

“There’s always the threat of trees falling—always,” Amadeo said, adding fire-weakened trees can tumble at a moment’s notice, forcing firefighters to keep their head on a swivel. “That’s why they call them ‘widow-makers,’ because they land on you.”

Luckily, no errant trunks or branches hit the crew members.

However, one Zayante firefighter sprained his ankle while restocking the truck.

Because the district has so few volunteers, they weren’t able to replenish their ranks up north. So, Felton Fire Protection District sent a firefighter to the historic wildfire fight.

As they were nearing the end of their two-week stretch, lightning zapped land just beyond the northern perimeter of the Dixie Fire, and the strike team was diverted.

“There were tons and tons of houses right at the bottom of that hill—beautiful houses,” Amadeo remembered, showing a stunning video of a sea of flames rippling through a thick forest. “It was gnarly. You don’t go shovel to flame, or nozzle to flame, on that, because it’s just not happening.”

Thankfully, helicopters were available that day to assist with air attacks.

“The day after that we got reassigned to the Caldor Fire,” Amadeo said. “They said, ‘Caldor’s blowing up; you need to go.’”

He wondered if that meant, instead of heading home, they might have to stay away from the San Lorenzo Valley for another two weeks.

The team drove 500 miles, through Nevada, and made it to the South Lake Tahoe area just as wildland-assault puzzle pieces were being assembled. The Zayante crew eventually learned a team from Scotts Valley Fire Protection District would come to relieve them.

The Santa Cruz County strike team—XCZ-2326-C—would remain on the Caldor Fire for an entire month.