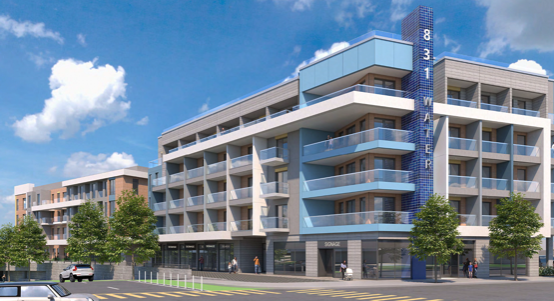 The saga over a controversial housing project that would build low-income apartments will continue, after the Santa Cruz City Council voted 4-3 to move the project forward at Tuesday’s meeting.

The development would build between 55 to 82 apartments for people who earn 80% or less of area median income ($82,234) at 831 Water St. In all, 145 apartments, the rest made up of market rate units, would be constructed.

The project was originally denied by the Santa Cruz City Council, but the elected leaders later rescinded that decision after the state found their action was illegal and organizations threatened to sue the city.

The project developer, Novin Development, submitted the application under Senate Bill 35, a bill passed in 2017 that aims to streamline affordable housing projects. SB35 applies to cities that have not met their affordable housing mandates imposed by the state, and limits local elected leaders’ ability to deny housing proposals. SB35 also forces cities to consider proposals according to their objective standards, allowing developers to bypass requirements that apply to most projects.

Many people who called into Tuesday’s meeting spoke of their struggles to find affordable housing, and a few said they, or someone they knew, were forced to move because of high rent.

“I am urging the council to approve 831 Water Street and more housing projects like it,” said Michael Bull, a third-year UCSC student. “I know personally people who dropped out of UCSC because they couldn’t get housing for fall quarter. It’s a housing crisis.”

Councilmembers agreed that there is a need for affordable housing projects, but nearly all spoke to procedural issues with Novin Development’s application. Councilmembers Sandy Brown and Justin Cummings cited contradictory and incomplete materials as part of their reasoning in voting against the project. Councilmember Martine Watkins also said the application was confusing and seemed incomplete, and that ultimately it didn’t feel like a fit for the community.

Councilmember Donna Meyers, who also had objections about the development, reminded her peers that the vote was to decide if the project met the city’s objective standards.

“I think the procedural aspect of what we’re facing is, unfortunately, probably the piece that is the hardest to swallow today,” said Meyers, who voted to move the project along. “But I am very concerned that a denial through this motion basically will land us in a lawsuit.”As the project moves toward a building permit, city staff made five recommendations to the developer. Most were related to adding traffic signals and warning signs for the bike lane and to increase bike safety, two of which the applicant included in its new proposal.

Next ArticleAri Parker Takes Over as Watsonville Mayor