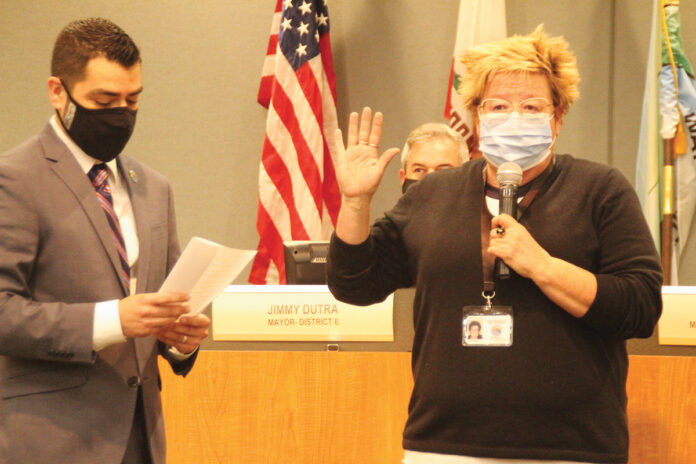 A lifelong Watsonville resident and an educator for more than three decades, Parker was sworn in by Assistant City Clerk Irwin Ortiz as the city’s head elected official. City Councilman Eduardo Montesino was sworn in by his son, Cuauhtémoc, as the Mayor Pro Tem, or the representative who would act as mayor should Parker be unable to perform her duties.

In a brief speech, Parker thanked her mother, Aurora Ardaiz Parker, 98, who was at the meeting briefly. She also thanked other family members present at the City Council Chambers, and her Native ancestors—she has roots with the Amah Mutsun people. Parker’s great-grandfather, Giles Refugio Joaquin Cano, Sr., was the constable for Pajaro for more than 30 years.

Parker is the 10th woman to become mayor in the city’s 153-year history. She was voted into office in 2018 and serves as the representative for the 7th District, which encompasses much of the eastern region of the city off East Lake Avenue and around the senior villages.

In an interview after the meeting, Parker said that, among other things, she would like to continue the work on the city’s downtown plan, build out current youth programs, support the Native American community and renew the city’s emphasis on its long-term planning around the growing older adult community.

“I’m a huge supporter of our senior plans and, of course, I have 5 billion ideas about that,” she said. “[They’re] probably more than we have money for but what the heck, we’ll go looking for [funding].”

Parker’s oath of office came after Jimmy Dutra wrapped up his one-year stint as mayor—because of voter-approved Measure I the mayoral seat rotates annually. Dutra, after highlighting his efforts in helping bring the Covid-19 vaccines to South County, among other things, said that his year as mayor was tumultuous because of the pandemic.

That was just one of four major changes that happened at the Tuesday meeting. Dutra honored City Manager Matt Huffaker, City Attorney Alan Smith and City Clerk Beatriz Vasquez Flores with proclamations. All three are set to leave the city. Huffaker will take over as Santa Cruz’s city manager, Smith will retire after 25 years as the city’s legal counsel and Vasquez Flores will soon leave the city after severing as clerk for several years.

Watsonville will also welcome a new City Councilmember next month when Vanessa Quiroz-Carter is sworn into the 2nd District seat. She beat Frank Barba in a special election earlier this month.

Parker said that she is excited about the changes. She also said that she has confidence that Interim City Manager Tamara Vides can lead the city as it seeks a new chief executive over the first quarter of 2022. She also highlighted the fact that the city’s mayor and executive team—city manager, city attorney and city clerk—are all women.

Parker, who earned a bachelor’s degree in political science from Santa Clara University and completed her graduate work at UC Santa Cruz, got her start as a teacher at Salsipuedes Elementary School before moving to MacQuiddy Elementary School. She now teaches at Bradley Elementary School—at least two of her students were in attendance at Tuesday’s meeting.

Her first foray into politics, she says, was helping her father stuff envelopes for local campaigns in her youth.

“I learned that but I vowed I’d never be a candidate because I saw how difficult it was,” she said. “But, local government is probably the best because [constituents] do show up at my door at 8am on a Saturday morning—and I’m in my pajamas—because they live down the street from me. I’m OK with that … that’s part of accessibility.”

Parker’s four-year term on the City Council will end at the end of next year, but city records show that she has already formed a reelection committee for the Nov. 8, 2022 election.

For now, Parker says that her focus is squarely on helping Watsonville be “the best Watsonville that we can.” She also wants to bring back “positive social discourse.”

“I want to bring Watsonville back together,” she said. “I feel like we’ve been very divided.”