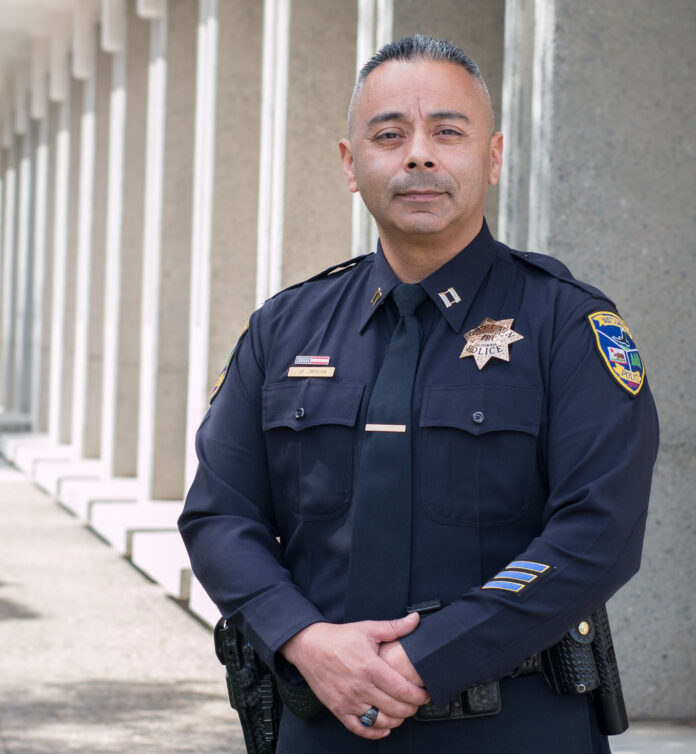 WATSONVILLE—A Watsonville police officer who began his career with the agency as a cadet three decades ago has become the department’s newest police chief.

Jorge Zamora was chosen after an extensive national search.

“Through the process, Jorge demonstrated his in-depth knowledge and understanding of our community and his clear vision to support, develop and lead the police department in future years,” said Interim City Manager Tamara Vides.

Zamora was born and raised in Watsonville. He became a full-time Watsonville Police Department Officer in 1996.

“My approach to policing is simple: lead with integrity, self-compassion, competency and courage,” Zamora said. “Do the right things for the right reasons, treat all people with respect and fairness, set high standards for myself and the organization, and be accountable through transparency.”

Once sworn in, Zamora will become the city’s 16th Chief of Police, and the first, first-generation Mexican-American to hold this role.

“It is great to see a native of our community have the opportunity to lead the police department,” said newly seated Mayor Ari Parker. “Jorge, along with his many years of experience, training and education that will position him well to lead our men and women of the Watsonville PD, understands the needs of our city and the challenging expectations residents have of the police.”

During his time with the department, Zamora has served in various assignments including patrol, gang and narcotics enforcement and SWAT. He has served as a detective, a field training officer and a hostage negotiator. He has also been a Regional Occupational Program instructor, and served in youth mentorship.

He most recently served as a police representative on the City’s Ad-HOC Committee on Policing and Social Equity, where he worked alongside community members to gain a deeper understanding of how the police department and the city can better serve its residents.

Zamora attended local schools and graduated from Radcliff Adult School. He holds a bachelor’s in criminal justice management from Union Institute & University and a master’s in leadership studies from Saint Mary’s College of California.

His appointment follows the retirement of Chief of Police David Honda, who served Watsonville from 2016 through 2021.

The community is invited to attend Zamora’s badge pinning ceremony on Jan. 10 at the City Council chambers at 4pm.