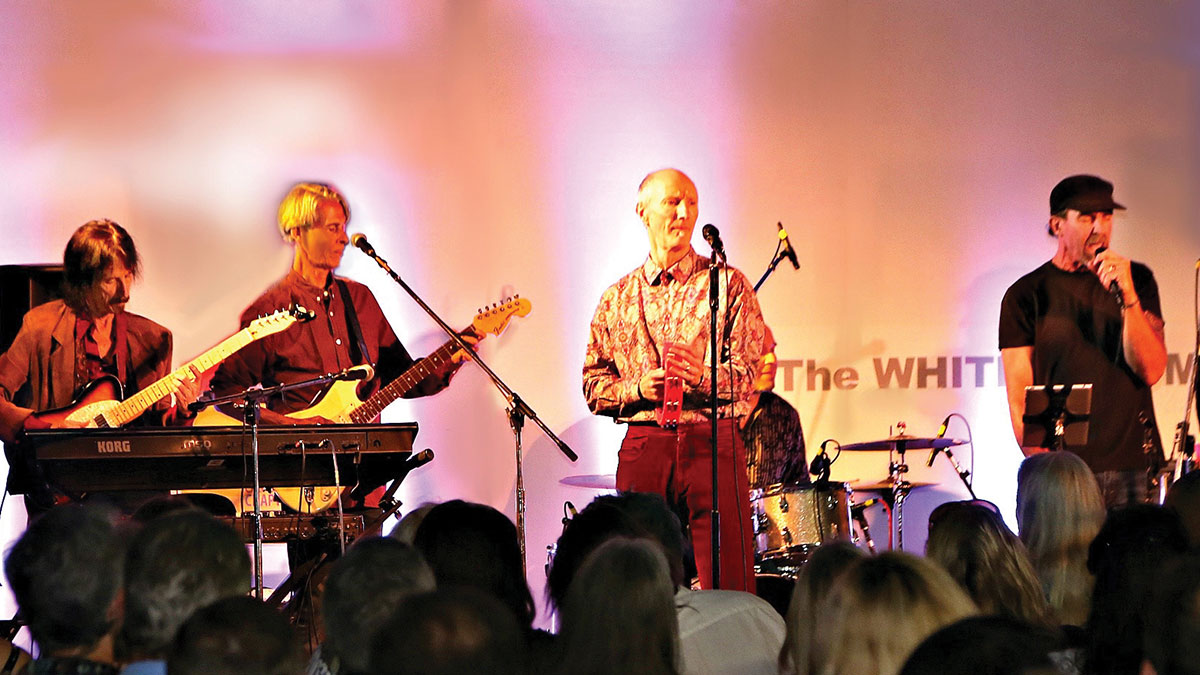 Local musician Dale Ockerman—who played with the Doobie Brothers for many years, among other classic Bay Area bands of the ’60s, ’70s and ’80s—recalls when his current group the White Album Ensemble first performed the Beatles album Revolver at the Rio in 2004. There was a look of shock and delight on people’s faces when they performed “Eleanor Rigby” for the crowd.

“All the sudden, everybody walks off stage. The singer sings with a string quartet,” says Ockerman. “It was so un-rock—a big surprise.”

The group started out in 2003 as a way to replicate the Beatles’ behemoth, scatter-brained double-album The White Album, a record the Fab Four released in 1968 as they worked in turmoil and often as separate entities. They never performed the songs live. Ockerman assembled an eight-piece band that included two keyboards, two guitars, bass, drums, and two lead singers who don’t play instruments—the material is too hard to play and sing at the same time.

After a year of sold-out shows, Ockerman thought his project should expand its concept to bring any of the Beatles albums to the stage that were released after the band stopped touring in 1966. They also included Rubber Soul, released in 1965, which had a handful of songs too complex to perform live, like the sitar-laden “Norwegian Wood.” On Dec. 27 and 28, the White Album Ensemble will perform Abbey Road in its entirety at the Rio Theatre.

“It’s the stuff that the Beatles didn’t do because it was too hard,” Ockerman says. “The technology didn’t allow it, either. They didn’t have monitors, they didn’t bring string sections, horn sections—all that stuff. We do.”

It has been an evolving process for Ockerman. In 2004, he and his group first attempted Sgt. Pepper’s Lonely Hearts Club Band and Magical Mystery Tour, but found that it didn’t work without an orchestra (and, in the case of Sgt. Pepper’s, Indian instruments like the sitar and tabla). So, the first official non-White Album production of the White Album Ensemble was a double feature of Rubber Soul and Revolver. That one string quartet song, “Eleanor Rigby,” went so well that it seemed worth assembling an even bigger band to do Sgt. Peppers.

Now, 16 years into the band’s existence—which is longer than the Beatles were a band—the White Album Ensemble have performed every Beatles album from Rubber Soul on. Abbey Road, the Beatles final record, has been performed a few times, but this upcoming show is a special performance to celebrate the 50th anniversary of the record.

“On Abbey Road, you see this maturity. George Harrison is coming up with ‘Here Comes the Sun’ and ‘Something.’ Masterpieces!” Ockerman says. “The side two medley, where it’s just songs all tacked together, it was this huge thing. Once you start playing it, you can’t stop. That was a lot of fun. A lot of really good-quality stuff, a lot of really clever songwriting.”

The band that Ockerman has assembled for Abbey Road is mostly a rock arrangement: Ken Kraft (vocals/guitar), Richard Bryant (vocals), Ockerman (keys, guitar), Stephen Krilanovich (guitar, vocals), Endre Tarczy (bass, vocals), Trey Sabitelli (drums, percussion), and Will McDougal (keys). There will also be a four-piece string quartet and some other nuances, like having five singers on the lush “Because,” and some synth parts on “Golden Slumbers,” “She’s So Heavy” and “Here Comes The Sun.”

Unlike the turmoil of the White Album, the Beatles recorded Abbey Road aware that it would be their final album, which eased some of the tension. It’s one of the group’s most cohesive records. It was a farewell to an era, and a sneak peak of what was to come in rock ‘n’ roll.

“It was a chaotic time. Altamont, Vietnam, the ’60s are over. The ’70s—we don’t know what it is,” Ockerman says. “They really got ahead of everyone else: Elton John, Led Zeppelin. It was pretty advanced. I wouldn’t call it prog-rock. It was nothing like Genesis or Yes. It had really beautiful symphonic tones. It was hard to describe. Great rock ’n’ roll. Really sophisticated. Not really trying to prove anything.”