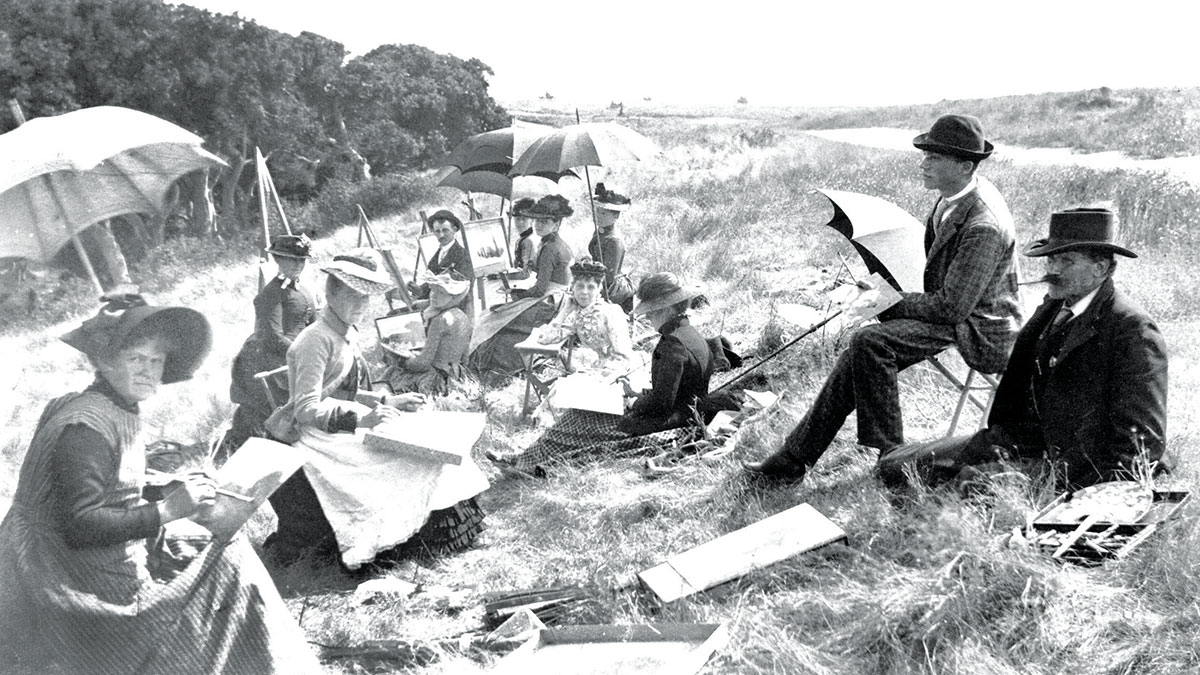 This week, the Santa Cruz Art League will enter territory that no other arts organization in Santa Cruz County has ever ventured—its second century.

In 2019, the Art League marked its centennial year doing what it has always done: hosting gallery shows, curating exhibits and helping neophyte and experienced artists alike get seen.

But even though its odometer has now reached triple digits, the Art League is looking to the new decade as a period of rejuvenation, says executive director Val Miranda.

“There is a perception out there in the community that the Art League is only about paintings and other traditional art,” says Miranda, who is approaching her fourth year running the organization. “We’re trying to change that perception and open up even more broadly to the range of arts that are out there.”

Yes, the Art League was founded on a devotion to plein-air landscape painting. But its artistic sensibilities have not languished in antiquity. For example, the League’s current exhibit is a photography show themed on “divergent” travel photography and curated by Allison Garcia, co-founder of the thriving local photography community Open Show Santa Cruz. In the past year, the Art League has hosted gallery shows on metal arts and fiber arts—with plenty of shows aimed at painting, as well.

The Art League was first incorporated in 1919, but the artist community that founded it reaches back even further, to the late 1800s—the golden age of Cezanne and Gaugin. It was during that period that a group of artists known as the “Jolly Daubers” would gather for excursions to paint landscapes in spots all around Santa Cruz County. From that community, artists Fred Heath and Margaret Rogers established what would become the Santa Cruz Art League, which nurtured a handful of accomplished local women painters, most notable among them Cor de Gavere and Leonora Naylor Penniman (Leonora’s grandson Ed Penniman today remains one of Santa Cruz’s most well-known painters).

It was in the years following World War II that the Art League made the canny decision that allowed it to live to 100. In 1949, the Art League raised funds to buy property on Broadway near Ocean Street, and in 1951 it opened the building at 526 Broadway, where it still is today.

“I feel like they were real mavericks,” Miranda says of the Art League’s post-war generation that made the decision to invest in real estate, something well beyond the reach of most arts organizations today. The Art League building consists of a main gallery, a smaller gallery, a gift shop, and the Broadway Playhouse, which has hosted hundreds of theater productions going back decades.

Today, SCAL has a 10-member board of directors and between 400 and 500 member artists. The League still maintains two long-standing art traditions established by their forebears that, taken together, illustrate the Art League’s commitment to the local community and its prominent place beyond the county line. The first is the annual High School Competition, in which local high-schoolers get the chance to display their art at the SCAL gallery. In 2020, the high-school show will mark its 65th year.

The second tradition is more of an indicator of the Art League’s standing among arts organizations across California. It’s the Statewide California Landscape Exhibition, which features landscape art by artists from all over the state. In the spring, the Statewide show will be hosted by the Art League for the 90th consecutive year.

Including those traditional shows, the Art League hosts between eight and 10 exhibitions each year. In recent years, it has worked with art students from UCSC to produce a number of temporary “pop-up” exhibits, which give students experience in curating, planning and installing art shows. The Art League also offers art classes and weekend workshops in a wide variety of artistic pursuits, including watercolor, pastels and figure drawing.

In 2020, says Miranda, the Art League will go forward in establishing visual arts education in a way that it’s never done before with K-12 school and family programs. “There will be lots of kids in the building,” she says.

In January, the Art League’s second century will kick off with another annual tradition: the Members Exhibition, featuring work from SCAL’s member artists.

“I always describe the Art League as being committed to the life cycle of the artist,” says Miranda. “From people who have no experience with art at all to artists who want to develop their skills, so they can be confident enough to get an artwork in the Members Show and have exhibitions in different places all over town.”

Next ArticleAn $8.5 Million Bid to Revive the Santa Cruz Riverwalk