.Why We Love Our Dogs 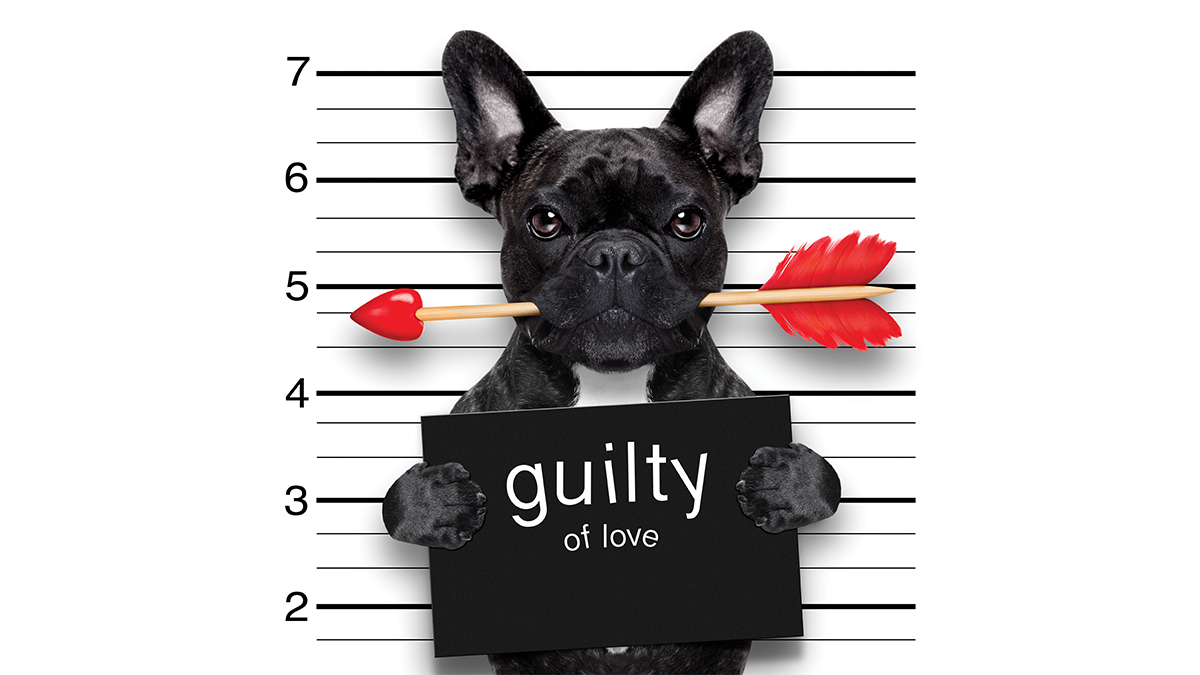 [dropcap]V[/dropcap]alentine’s Day is coming up—and with it, mixed feelings. Sure, cards and chocolates and flowers are nice, but are they really a gift if somebody is obliged to give them? Do roses tremble with the same dread turkeys intuit about Thanksgiving?

For those whose relationship status is “complicated” or “stalled,” it’s tempting to blow it off or pretend to be out of town. Valentine’s Day is frequently dismissed as a Hallmark holiday, though it predates the company by centuries. In Shakespeare’s Hamlet, the doomed Ophelia sings a little song about St. Valentine’s Day in which a young woman sleeps with a guy who then won’t marry her because she’s no longer a virgin. Let’s see you make a card out of that one, Hallmark!

Still, in these often cynical and divisive times, it’s nice to pause and share a moment in the name of love. And if you like your love constant, true, and enthusiastic, simple and complex all at once, let’s all raise a heart-shaped glass and give a toast to the dogs.

While we humans are always busy dividing ourselves by race, class, and politics, the dogs are doing their best to bring us back together again. They have infiltrated about 44 percent of American homes, and do not discriminate based on your election-year yard sign; they will pee on all of them without exception. You can try to impose your views on them, but their rainbow collar or confederate flag vest isn’t going to mean anything to them at the dog park. They boil life down to the basics, and thereby set a fine example.

Dogs are loyal companions, natural entertainers, and efficient foot warmers. They warn us about intruders, real and imaginary. They revere us as pack leaders even if nobody else will, and ask for little in return. In fact, most would gladly give more; many dogs have been bred for generations to work hard, but now have no reason to do so, much like trust-funders. Telling your dog to stop digging, chasing, bringing you sticks to throw, barking, bringing kegs of brandy into the Alps, or menacing mail carriers is an uphill task if that’s what they’re literally born to do.

Descended from wolves, dogs are still pack animals at heart and are the ultimate team players. They will accept that a pack can include and even be led by humans, and so have become deeply entwined in our lives. And we reciprocate. Emotionally healthy people have a drive to nurture, and most dogs are happy to soak it up. They are often considered family members and subject to varying levels of coddling ranging from “petted and fed” to “eternal spoiled toddler.” In fact, some dogs’ lives are remarkably similar to a baby’s, with bed-sharing privileges, Christmas stockings, holiday outfits, a stroller, sitters, playdates, birthday parties, and the satisfaction of knowing that somebody else will get rid of their poop.

Do some people go a little overboard with the whole “my dogs are my babies” thing? Surely. Do dogs consume resources that could have otherwise gone to humans in need around the world? Sure. But let’s widen the lens and consider that pet ownership can bring out some of our finer qualities, like compassion, caring and kindness. Aren’t these things that make the world a better place? Might they help us envision and promote a more generous worldview? And if you want to argue resources, if it comes down to a choice between having a dog or a child, the difference is gigantic. Somebody should look that up.

The point is, dogs are comparatively a bargain. For the price of one gift that might make a teenager grudgingly appreciative, you can get a dozen that will make a dog ecstatic and give you some joy as well. Can you buy a squeaking Donald Trump chew toy? Of course you can (get yourself one, too!). How about a scaled-down Airstream trailer doghouse? You bet. Dog treats shaped like kitty poop? Yes, you can actually buy that. There is no end of ways to spoil your dog, but mostly they just want to be around you, which can lead to some dramatic escapes while you’re gone.

Never underestimate a motivated dog with time on its hands. They can climb, dig, or chew their way out of confinement with exasperating tenacity. Sometimes they pull off a Houdini-like mystery, leaving no visible clues to how they did it. Enter modern electronics and the world of pet surveillance, a rabbit hole from which many an owner has yet to emerge.

You can now buy a digital camera that allows you to monitor your dog while you are out via website or smartphone app. More complicated ones have microphones so you can hear if they are barking or knocking over flower pots. The next level up includes a speaker that allows you to tell them not to knock over the flower pot. Not good enough? Go for the one with the video phone. Want to reward your dog for not knocking over the flower pot? Get a model that ejects treats like a tiny tennis ball server. Does the little fur-baby seem bored? Several have a remote-control laser pointer. Yet another has an aroma ejector and even a little TV screen that shows your subscription to DogTV, a service that purports to show programming beneficial to dogs … YMMV. One has, get this, a button in the shape of a paw that sends you a message that your dog wants to chat—or maybe your dog just hit it by accident while ripping the device apart for the treats inside. Dogs are pretty low-tech.

Then there are dog-mounted cameras that typically hang off the collar, and if you don’t get motion sickness, you can watch the many videos of dog POV adventures online, sometimes professionally edited together with footage from static cameras around the house. Their private lives of garbage raids, shoe fetishes, even unauthorized romantic liaisons are available to fans looking forward to every new episode of The Real Housedogs of Everywhere.

What if your star performer disappears into the neighborhood to get a little privacy? No problem if you have a GPS tracker on the collar, which sends locations to your smartphone for a low monthly price of less than 10 bucks. These often include fitness data, so you can obsess about step counts together. First question: with four legs, do they get twice as many steps as you?

Dogs are great for getting our butts outside and moving. They need regular walks, and they can make us feel safer being out on trails alone. It can be hard to keep the heart rates up if you have the kind of dog that everybody wants to stop and pet, but it’s sometimes nice to have a reason to have friendly conversations with strangers. The conversations usually start and end with predictable questions about name, age and breed, but you never know what kind of relationship might grow from such a simple exchange. You might end up with a new friend, a reliable dog sitter, or even next year’s Valentine. If you want to accelerate the process, there are a number of dog parks, meet-up groups, and even dating sites for dog owners, such as datemypet.com.

There are places to take a well-behaved dog in public, including many breweries and wineries with patios. Other places are listed on a myriad of websites. But most indoor businesses aren’t appropriate for dogs, except for trained service dogs allowed under the ADA. There is a big, contentious gray area of therapy and support animals that’s sometimes abused by people who just want to take their dogs everywhere, and it’s creating a growing backlash. Hopefully soon proper training, mutual respect, and common sense will result in less grumbling and tripping over leashes in the grocery store.

If you want a little doggie energy in your life but don’t have the time or energy to have one full time, there are options. The simplest is to just offer to pet sit for a friend who has a dog you like—your friend will appreciate the chance to get out guilt-free, and you can experience a calm meditative trance state from the repetition of throwing a ball a thousand times, followed by lessons in speed-eating and napping from a pro.

For the more dedicated, local shelters have some interesting options for you. Many animals need temporary foster care outside of the facility, and your attention and home could provide a life-saving sanctuary.

Love the energy of puppies, but aren’t so interested in an adult dog? The little ones need to be socialized and kept out of the shelters until their immune systems mature. Once they are older and stronger, they can be returned to the shelter to be adopted out.

Want to help a sick, injured, or undersocialized dog get healthy and play well with others? It will take a lot of your energy, but you’ll help the dog recover and get adopted into a happy home.

If you want a brief try-out of a dog you have your eye on, or just want some company now and again, the SCPA offers a “slumber party” option where you can take one home overnight and see how it feels.

Whether you own one, borrow one, or just watch them race around together on the beach, it’s easy to appreciate how dogs have made our world more loving and joyful. So here’s to you, our dogs, fur-babies, pooches, pups, and man’s best friends. As Samuel Jackson said in Pulp Fiction, “Dogs got personality. Personality goes a long way.”

Next Article5 Things to Do in Santa Cruz Feb. 7-13