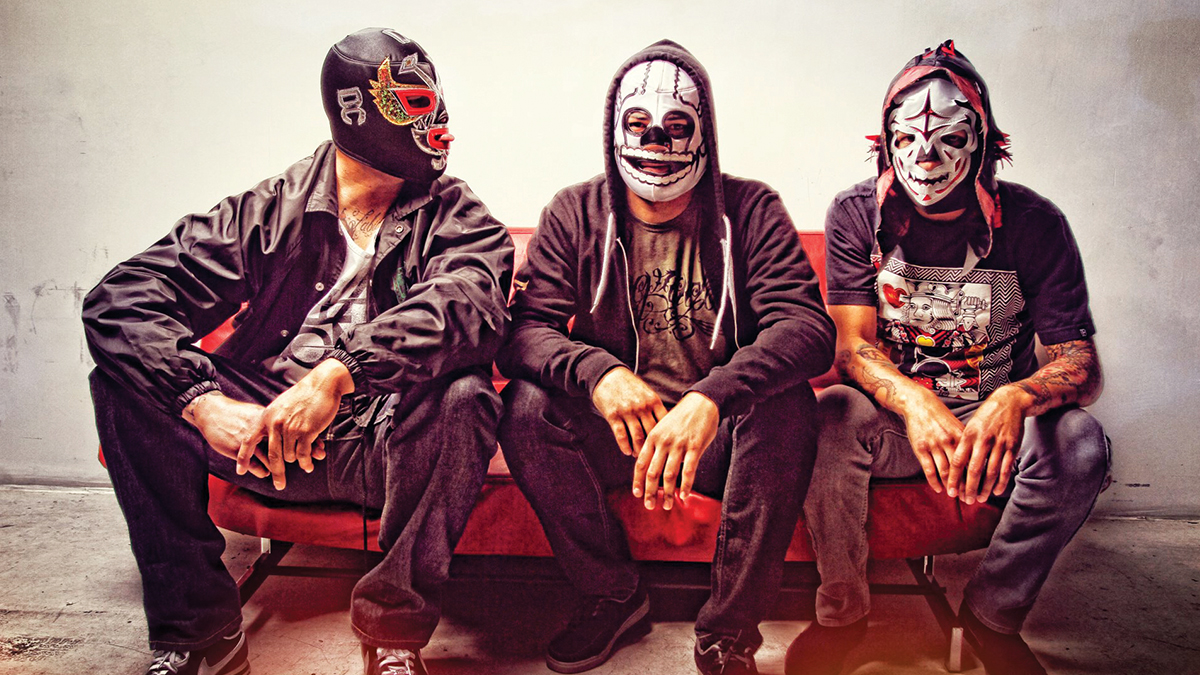 Music highlights for the week of February 7, 2018.

In 2013, Arizona reggae-rock-Latin band Fayuca released a video for their song “Por Que Seguir,” which included some powerful images of government oppression, and the band playing music to the people while wearing Mexican wrestling masks. There’s a lot to unpack there in terms of its message—and musically, it’s nearly as complex. The song cycles through some ska, punk, reggae, and has a cumbia breakdown. In the more than a decade that these guys have been playing music, they’ve always kept it diverse, with their lyrics in Spanish and English. AC

For years, Scott Cooper has given Santa Cruz an eclectic mix of blues, rock and soul jams, playing everything from original songs (including KPIG-approved fan favorites like “Ghost of La Honda” and “Save Your Love For Me”) to the Grateful Dead covers of his China Cats project. This week, Cooper and his Barrelmakers will deliver a culmination of sound with their CD release party at Michael’s On Main. MAT WEIR

In the right hands, the Hammond B-3 organ is a fearsome beast, a ferocious monster that can snarl and sing, growl, shout, whisper and sigh. Over the past two decades, Pat Bianchi has earned renown as a particularly adept beastmaster, paying old-school organ dues with guitar great Pat Martino and NEA Jazz Master alto saxophonist Lou Donaldson while stretching into new territory with vibraphonist Joe Locke. Concluding a series of gigs around the region, he plays Santa Cruz with a trio featuring veteran guitarist Paul Bollenback, who’s toured and recorded extensively with B-3 star Joey DeFrancesco, and rising Canadian drummer Sanah Kadoura. ANDREW GILBERT

Canadian singer-songwriter Bruce Cockburn has been a presence on the pop music landscape for the last 40 years. His musical style has elements of jazz, folk and rock and his impressive output includes 30 albums. But Cockburn is known as much for his social consciousness as for his musical style. A committed activist whose passions include human rights, the environment, politics, and spirituality, Cockburn has worked with a number of organizations, including Oxfam, the International Campaign to Ban Landmines, as well as Amnesty International and Doctors Without Borders. Some of his most powerful songs are “Mines of Mozambique,” “If I Had a Rocket Launcher,” and “If a Tree Falls.” As he has said, “We can’t settle for things as they are. If you don’t tackle the problems, they’re going to get worse.” CAT JOHNSON

Nothing like watching a couple of old songwriters on the porch, picking their acoustic guitars and telling stories about the way things used to be. Well, the Civic Auditorium is hardly the front porch, but otherwise that’s kind of what you get when you stick Americana legends Lyle Lovett and Robert Earl Keen on its stage together. The duo will share the evening with nothing but a couple chairs, acoustic guitars, and their razor-sharp wit. AC

A favorite of music lovers in the band’s native San Diego, Tribal Seeds is California reggae at its finest: sun-soaked, mellow vibe, spiritual leanings, Jamaican inflections and a one-love approach to life and making music. This Friday and Saturday, the award-winning band that’s been holding down West Coast reggae since 2005, led by brothers Steve Jacobo on vocals and Tony-Ray Jacobo on production duties, swings through Santa Cruz. Also on the bill: The Original Wailers and the Expanders

Once the lead singer of legendary group Black Uhuru, Junior Reid has had a successful solo career since his 1989 release, One Blood. More recently, Reid has collaborated with such artists as Alicia Keys, Ludacris, T-Pain, Waka Flocka Flame and others, reminding everyone of his place in the game. As a special treat, he will be backed by the One Blood Band with special performances by his sons JuJu Reid and Yung Jr. MW

Guitarist Ed Gerhard is known for his unique acoustic finger-picking style, which creates what can best be described as “the sound of rainbows gently caressing your earlobes.” Or a fancier person might say that he creates a “guitar voice” and literally sings with each string he plucks. He certainly creates fantastic tone that will have you dreaming of pink fluffy sheep spiraling around your forehead in slow motion. It makes for great background music at the dentist, and whatever you do, don’t bump his album when you’re driving home late at night from the club. But do go to this show and watch how he magically sweeps his guitar with fingers to create the sound of angels. AC

Way back in 1983, Trey Anastasio, Jeff Holdsworth, Mike Gordon and Jon Fishman, four students at the University of Vermont, formed Phish. The band would go on to become a defining band of the contemporary jamband scene, with its inimitable fusion of prog rock, psych, folk, country, jazz, blues and pop music. In 2003, bassist Gordon, who also plays banjo, piano and guitar, launched a solo side-project dubbed Mike Gordon. This Monday, he and his ace band bring the show to the Catalyst. CJ

Roots rock out of Oregon. Sunday at Moe’s Alley

Next ArticleWhy We Love Our Dogs