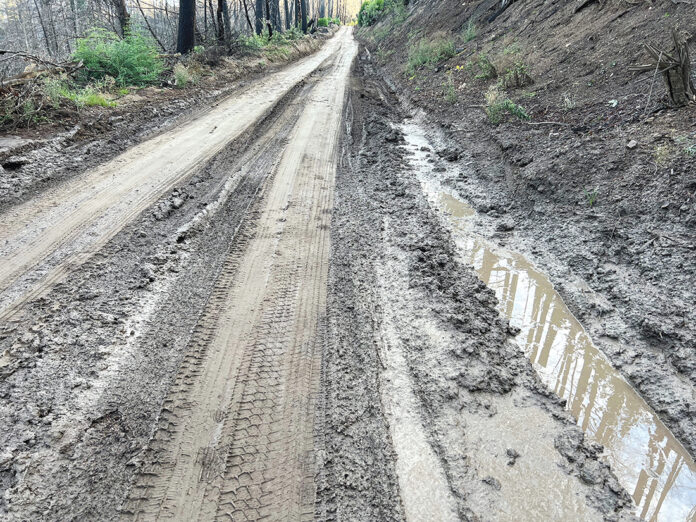 Following a litany of resident testimony from wildfire victims on Tuesday, the Santa Cruz County Board of Supervisors became convinced a cleanup contractor that made a quarter-billion dollars in the wake of wildfire destruction left another disaster behind.

They voted unanimously to reach out to Gov. Gavin Newsom for help, after staff reported Anvil Builders Inc. would not fix millions of dollars in damage they caused to county and private roads, as well as septic and storm drainage systems.

“We have heard of people being trapped at their home sites,” said Public Works Director Matt Machado. “Right now, they’re in the middle of a battle.”

Of the properties managed by Anvil under a $225 million debris-removal contract following 2020 wildfires that ravaged Monterey, San Mateo, Santa Cruz, Santa Clara and Stanislaus counties, more than 50% are located in this jurisdiction, staff said.

The fire damage sustained locally was significant. The county had to replace 419 signs and 32 culverts.

The county has 45 miles of road in the burn scar on top of numerous other private roads.

Dave Reid, director of the Office of Response, Recovery & Resilience, said Anvil came up with the contract language saying they would leave roads in “equal to or better” condition.

He noted that residents of the Last Chance Road area had first raised problems with Anvil back in February.

“They were concerned about the grading that was being done to their roads,” Reid said, adding recent storms have quelled fire worries but raised landslide risk. “Rain is a double-edged sword.”

California Department of Resources Recycling and Recovery (CalRecycle), a branch of the California Environmental Protection Agency, contracted Anvil for the job.

The company accessed 664 properties across the county to remove debris.

Last Chance now has 7.8 miles of damaged road—which staff estimates will cost $2.7 million to fix. The original claim that was submitted to the Federal Emergency Management Agency (FEMA) was denied.

Landowners say their claims are being denied because they’d signed right-of-entry paperwork that acknowledged damage could happen on their property.

The total bill for repairs across the county is expected to run above $7.1 million, including around $4.4 million for county-maintained road rehab.

Anvil has not been responsive to requests to repair the damage, staff reported.

“Thank you for that depressing report,” said Supervisor Bruce McPherson. “The county can’t bear the cost of repairing these roads.”

Last Chance resident Forest Martinez-McKinney said Anvil probably could’ve gotten away with just partially repaving a section of their access, but chose to not even do that.

Next at the podium, that community’s roads manager said Anvil promised 40 loads of aggregate that never materialized, causing him to have to abandon his work truck during the recent storms when it got stuck.

He says the company offered to pay $75,000 for repairs an engineer said would cost $2.7 million.

“I’m sorry about that,” McPherson replied.

Other residents said they were appalled at how Anvil would grade a road flat so rain wouldn’t be able to wash off it properly, or they would take a road angled one way and turn it into a road angled in the opposite direction.

A Whitehouse Canyon Improvement Association member said Anvil replaced a road that had about 6-8 inches of material with just two inches of base rock and got government officials to sign off on it.

Supervisor Ryan Coonerty said local residents who have experienced trauma shouldn’t have to fight a company that was richly rewarded in the fire’s aftermath.

“We expect them to do better,” he said. “The people of Last Chance have been in an impossible position.”