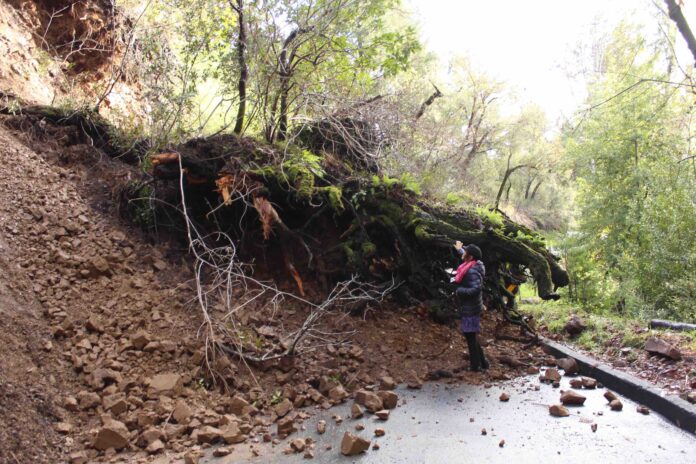 Rich Ambris was ferrying packages around in the lead-up to Christmas but was forced to turn around when he got to 13203 E. Zayante Road because of a landslide covering both lanes.

“There’s no other way to get there,” said the 60-year-old courier from Felton, referring to the next stop on his route which was now unreachable. “I’ll probably have to call (the customer) and tell them.”

The volume of goods to deliver has increased this season, with the uptick in online shopping during the pandemic, according to Ambris.

“I go to Eagle Tree (Lane) every day,” he said around 11am. “I came here yesterday and it was fine.”

In the last couple of weeks, county officials say earth has shifted and covered roadways on more than a dozen occasions. And from Dec. 24-27, the California Highway Patrol recorded 45 traffic collisions, two flooding events and 13 reckless driving calls in the Santa Cruz area.

CHP spokesperson Officer Alyssa Gutierrez said these numbers are higher than usual because of the rain.

“The storm brings in many traffic hazards like falling trees and power lines down in the roadway—especially in the northern part of the county,” she said. “We tend to have more traffic collisions during wet weather conditions due many motorists driving too fast and following too closely.”

Christmas played a role, too, according to Guiterrez.

“The holiday weekend brings in many tourists traveling through our area,” she said. “This causes an influx of vehicles on the roadway and often more collisions due to unfamiliarity of the roadways.”

Ambris wasn’t bothered much by the E. Zayante landslide. After all, last year the road was closed for months.

“That all fell down,” Ambris said, motioning a curving stretch of road with a shiny new guardrail that locals like to call “the Narrows.”

And the smaller landslide by the creek further down E. Zayante Road—which was blocking an entire lane—was worse on Christmas Eve than the previous day, Ambris described.

Ambris says he doesn’t believe the package that was going to an address on the other side of the debris slide was a Christmas present and could be picked up later at the depot.

“We make sure we’re getting everything out,” he said, adding he had about 50 or so more items to distribute throughout the day.

Live Oak resident Aleksandra Wolska was deep in the Zayante boonies for delivery purposes, too.

“I’m visiting a friend,” she said. “I was going to drop off a Christmas present for him.”

Their annual gift exchange tradition was thrown into question by the gnarled branches and dirty ground that had taken over the rural thoroughfare.

“It’s like an earth dragon woke up, and it’s his paw grabbing at the road,” she said. “I think it’s nature being nature and reacting to the conditions all around us—to erosion, to unstable ground.”

Today she wasn’t particularly frustrated by the sudden change in plans, although on another day she might react differently, she says.

“This might just be a perfectly innocent natural movement of the soil, but in the context of everything else, it looks like a warning,” she said. “The paths we want to take might not be available to us.”

She explained she was referring to the scientific reports of more severe weather patterns thanks to the increase in global carbon emissions.

“We have a lot of slides everywhere,” he said, recalling the three landslides on Ice Cream Grade he’d already had to deal with.

Rodriguez says he even completed a small debris removal job at this very spot the day prior.

“When I was cleaning this area, I was afraid of the stump,” he said, referring to the large section of the trunk now lodged smack-dab in the middle of the roadway. “I was afraid it would fall down on me.”

Crews eventually cleared a path for vehicles on Dec. 27, so people didn’t have to drive all the way to the border with Los Gatos to get to Felton and Ben Lomond, or down into Santa Cruz.

And then on Tuesday, the county supervisors voted unanimously to ratify an emergency declaration in the wake of the Dec. 13 atmospheric river, which caused an estimated $3.1 million in damage. This allows local officials to seek disaster funding more easily.

“There’s nobody actually impacted by that road failure,” he said. “There were residences that were behind that, but they were all damaged in the fire.”

Hoppin says if a landslide or a falling tree pulls powerlines with it, the county has to wait for the power company to arrive before it can start the clean-up.

PG&E said between Dec. 22 and 29, in Santa Cruz County, there were fewer power outages than in other 2021 storms.