.Zumba on the High Seas 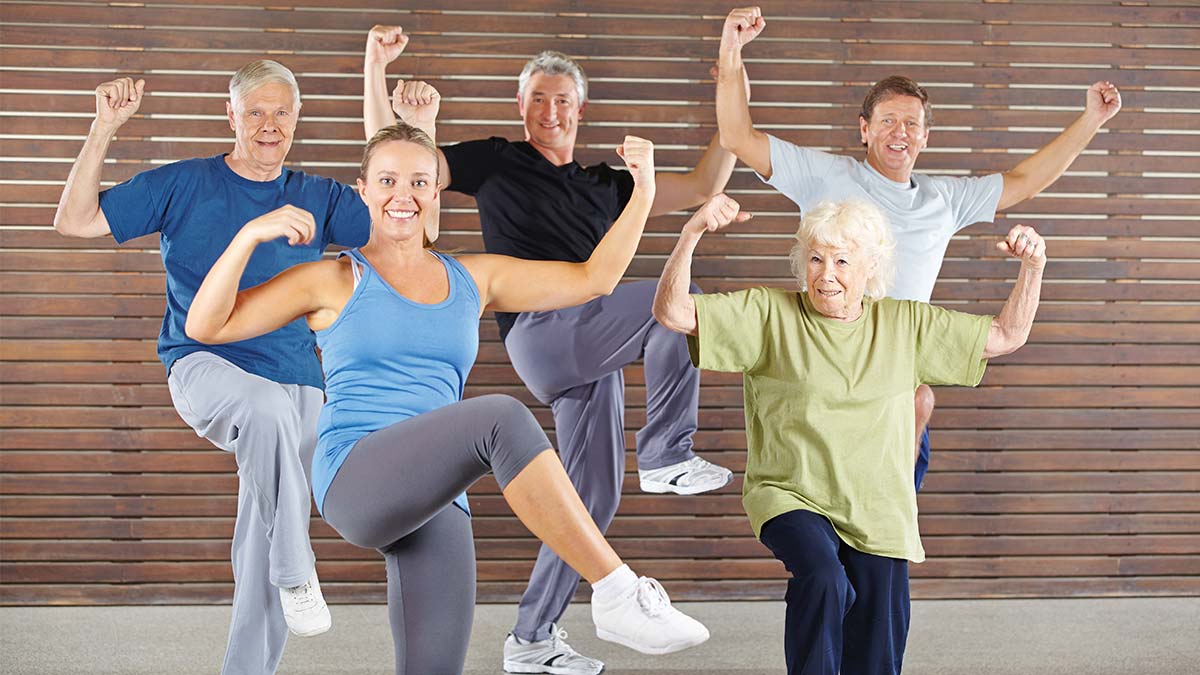 Seniors like myself cruise for a lot of reasons—for relaxation, say, or to visit exotic ports of call. Most wouldn’t think to cruise for fitness. But my recent Zumba cruise on Royal Caribbean’s Independence of the Seas—with its slogan “Eat-Sleep-Zumba-Repeat” emblazoned on every corner of the ship—made me a believer.
It all started because my daughter, Joy Smith, was joining 130 ZES (Zumba Education Specialist) staff from 50 countries, invited on board to provide classes for 4,400 passengers. The cruise welcomed instructors, along with friends and families who share a passion for the program. For a once-in-a-lifetime mother-daughter dance experience, Joy asked me to be her cabin-mate.
Zumba creator Alberto “Beto” Perez and this hand-picked elite team were cruise celebrities. These specialists are responsible for training instructors around the globe, and each one possesses a unique expertise, as shown in themed classes on the cruise. Joy incorporates cabaret, samba and hip-hop into her routines, and others specialize in Aqua Zumba, Bollywood or Brazilian Carnival, among many others.


Colombian-born Beto—like Shakira, known simply by his first name—began his career as a trainer and choreographer. On one fateful day in 2001, he arrived at his aerobics class without his regular music and improvised with personal salsa and merengue tapes, and Zumba was born.
Getting to the ship in Fort Lauderdale the day before departure involved a red-eye flight from SFO, and the early arrival meant a long wait in the Hampton Inn hospitality area before check in. At breakfast, Joy reunited with ZES friends from around the world. Early the next morning, a bus picked up her group for orientation meetings, and at a more civilized hour, a second bus transported friends and family to the Independence of the Seas. After meeting up at the safety drill, we visited the beautiful, windowed lounge reserved for ZES members. Before we set sail, I attended a Zumba Gold class with Helen from New York. She had us grooving to Aretha Franklin and James Brown, sprinkled among her many selections with a Latin beat.
More than 346 classes took place in spaces all over the ship, continuing until 10:45 p.m. Beto’s morning sessions, held poolside, easily accommodated his large posse of fans, but passengers visiting the excursion desk on the Royal Promenade had to dance their way through popular, massive classes held in the walkway.
On our first full day at sea while Joy taught, I consulted the ship’s daily planner and saw that a salsa contest was taking place poolside. Knowing that the majority of contestants would be instructors, I had no intention of competing, but hoped I might pick up some new moves. As the groups practiced their routines, the pounding beat of the music was so contagious that those of us watching couldn’t help but dance on the sidelines.
Because there was a busy night ahead, I spent my afternoon relaxing and reading on our private balcony deck. First on my evening agenda was another Zumba Gold class, this one taught by Joy Prouty and Josie Gardiner, co-creators of the lower-impact class along with Beto. The women fed off each other’s energy, demonstrating their credo “Zumba is a party, and no matter what the person’s age, everyone likes to have a good time!”
Then it was time for the official ZES welcome dinner, and I had hoped this could be my chance to meet Beto. He’s constantly surrounded by admirers, but the perfect opportunity for an introduction came just before dessert was served. The last thing I expected, however, was to have him jump up, plant a hug and kiss on both cheeks and lead me to a side aisle to talk! He thanked me for bringing daughter Joy into the world, and I gathered up the composure to say, “I took her to dance classes as soon as she could walk.” When he asked if I was a dancer; I said that I had always loved Latin dance and thanked him for creating Zumba. With a knowing grin, he responded, “It’s hot!”
Throughout the week, we ate healthy but tasty food at the buffet, and in the evening feasted on shrimp cocktail and lobster in the formal dining room. We experienced a whirlwind of classes, lifestyle seminars, and reunions in corridors, elevators and restaurants with friends, often dining with friends Niel Smith and A.J. Hernandez. When Smith, who Joy had trained, met Hernandez at the Orlando annual convention, they became a couple, and we were in on the secret that Hernandez planned to propose on the cruise. After a dance class on the helipad, Smith was surprised with a white brushed-gold diamond surrounded by blue sapphires, and the words, “Niel, you have been the glass slipper for my heart. Will you marry me?” The answer was yes.

Dinnertime was also an opportunity for Joy to meet the spouses who accompanied her ZES gal friends. Two of the husbands clued me in on the NZH Facebook page “Neglected Zumba Husbands.” There, an order link is provided for “Feel the Neglect” T-shirts. Both of these men, however, were supportive Zumba husbands, happily assisting their wives on work vacations to exciting locales.
On day three, the ship arrived at Labadee, the private island for Royal Caribbean guests, located on the north coast of Haiti. An official Zumba concert was taking place at Adrenaline Beach, but I opted to enjoy the upbeat music from our private balcony, looking forward to the next day’s destination of Falmouth, Jamaica.
We took the short bus ride to private Red Stripe Beach (named after the local beer) boasting fine white sand and warm Jamaican waters. We soaked up the sun, strolled along the beach and relaxed under wispy willow trees. The resident DJ led a group of us in lively impromptu dancing while waiting for the bus back to the ship.
On the last day, due to wind and rain, the reggaeton contest by the pool was cancelled, but there were plenty of indoor activities, including Joy’s seminar on healthy eating habits. That evening at the ZES farewell dinner, we dined at Beto’s table and enjoyed conversations with people from all corners of the world. For Joy and I, the cruise had given us the opportunity to dance anywhere, anytime—a pretty good reason for going off the grid.

The 2017 Zumba Love in the Caribbean cruise takes place April 23-28 from Miami, Florida to Nassau, Bahamas, and Cozumel, Mexico.