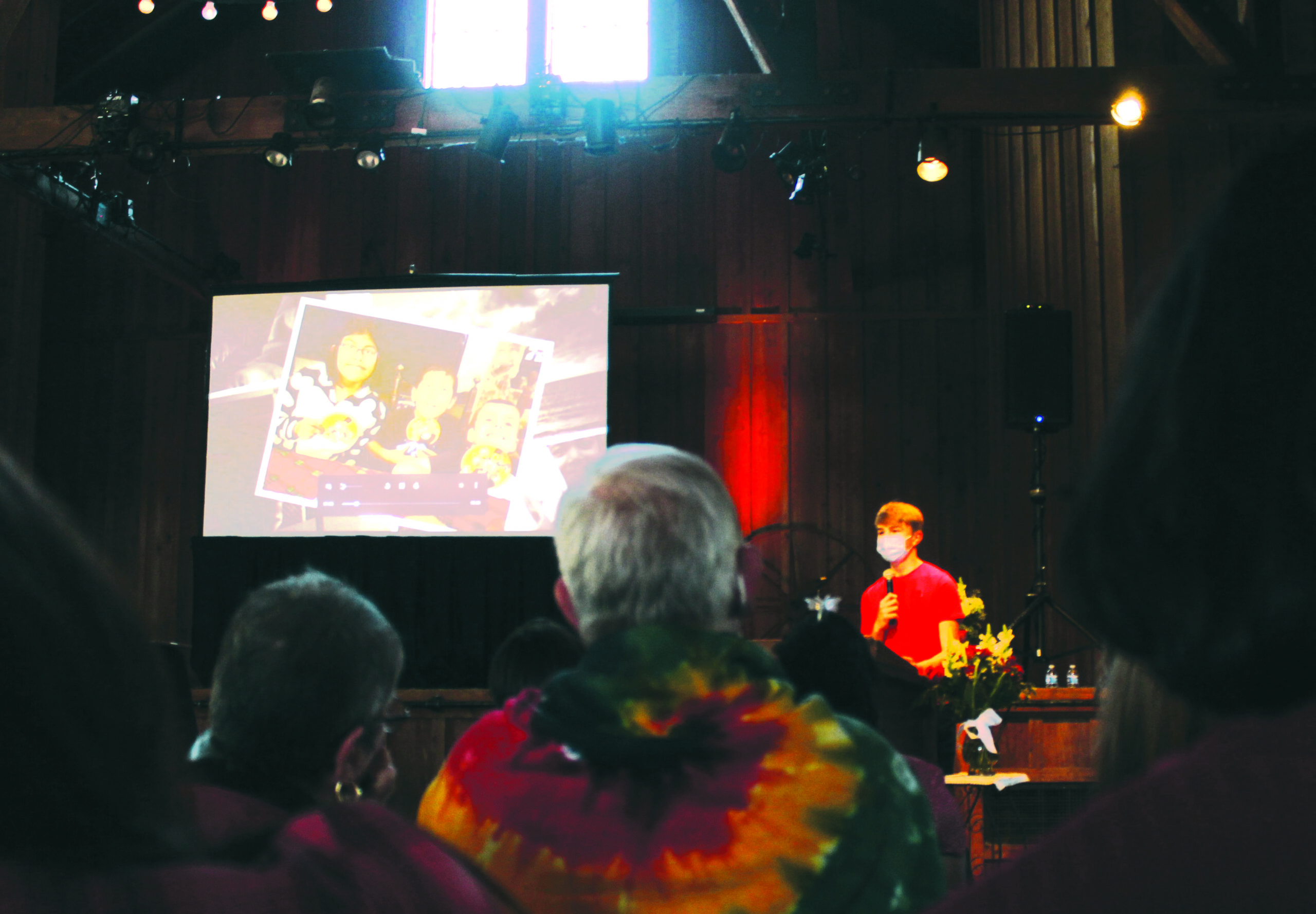 Betwixt Jones-Cruz stood up in front of the 200-300 people spilling out of Roaring Camp’s Bret Harte Hall in Felton Saturday. In her eulogy for her friend and fellow Scotts Valley High School freshman, 15-year-old Mateo Deihl, who was discovered to have killed himself the morning of Feb. 3, she recalled his stunning smile and how brave he was while exploring outdoors. And she recited a poem she wrote in the aftermath.

“Your breath hits my face,/With every cool gust of wind;/Your laugh mimicked identically/By the finches in your tree.” it began, and then later, “I hope you take the last of your suffering/And paint the skies for us./I know they will be beautiful/As long as you are the artist.”

Afterwards, she told Good Times that she was in an afterschool group with the student, where she was struck by how casually he described the frequent mistreatment he faced, like getting thrown to the ground by his backpack.

His mom, Regina Deihl, says her son, who was Latino, faced racial discrimination, in addition to other bullying, that was not adequately addressed by Scotts Valley Unified School District.

Superintendent Tanya Krause did not respond to requests for an interview by deadline.

At the district’s most recent board meeting, Feb. 8, administrators listened to parents speak in quivering voices about their worries in the wake of Mateo’s death. Teacher John Postovit mentioned the death in his report. “At the high school we have obviously had a pretty bad week,” he said, noting students held their own vigils on campus and counselors had been meeting with students daily. “We are working through it, trying our best to help the students.”

Mateo’s suicide not only set off a wave of grief within the Scotts Valley community, but it has also forced educators to reckon with diversity issues on campus. The day after her son’s death, Regina took to a moms’ group on Facebook to highlight the racist behavior she says the boy faced at school. “I have been sobbing all day, but decided to look at my phone,” she said. “My son’s name was Mateo. He was sweet, kind and polite. He came to us from the foster care system at 7. He had been severely abused and neglected for years. As a result, he was tremendously empathetic towards other kids.”

But while her son received the I Care Award for being compassionate to others while at the district’s middle school, he’d also faced serious difficulties, Regina posted. “He was bullied mercilessly for his race (he was Hispanic) and the other kids told him he was annoying,” she said. “Recently some kids stopped talking to him because they were afraid he would report their drug use to the office.” Both middle and high school administrators “were aware of the situations but did nothing substantive,” she added.

A survey conducted by the district last year found that although high school students felt teachers create a safe and welcoming environment most of the time, they also felt the school is least welcoming of students from different racial or ethnic backgrounds.

“I’ve heard kids talk to me about how other students (Black students) are lesser, using the n-word, all four years of high school,” one anonymous respondent wrote. “There is a serious race discrimination problem among the students and it needs to be addressed earlier.” In November, SVUSD approved a $13,000 contract with Phoenix, Arizona-based Inclusion Counts, LLC to conduct diversity training.

Two simultaneous “listening sessions” have been set for Feb. 24 at 6:30pm—one for white parents, and one for parents of other backgrounds.

During the board meeting’s public comment period, parents acknowledged SVUSD has been taking steps to stamp out racism. But they also demanded more action. Elizabeth Anderson said the community failed Mateo.

“I’m just feeling devastated,” she said. “We weren’t able to be there for Mateo in his life, and I think we owe it to him to honor his loss and his death.”

Anderson gave the district credit for starting multiple initiatives to stem the tide of bigotry, but called on administrators to create a crisis-intervention plan. “The reality is they weren’t enough,” she said. “What are we truly willing to do—as a community—to never have to do this again?”

Trustee Roger Snyder said he was “heartbroken” and “speechless” at the news of Mateo’s death. “I just want to acknowledge that this was a terrible week,” he said. “It’s clear that there’s more for us to consider.”

In an interview, Regina said she wants to see bullying, drug use and racial equity issues dealt with by the district. She said prior to the pandemic, in a conversation with the Santa Cruz County Office of Education, she learned that SVUSD was offered trauma-informed teaching resources but had declined them.

A spokesperson for the COE said it’s not aware of Scotts Valley Unified doing such a thing.

“We have shared resources with the district in the same manner we do with every district,” Nick Ibarra said. “SVUSD has always accepted our support and collaborated with our staff to implement best practices of trauma-informed care.”

The district is also an active participant in our student services network meetings, where issues of Social Emotional Learning and mental health are regularly discussed, the media rep added.

Just weeks ago, the family had negotiated a 504 plan for Mateo, who had PTSD, Regina said. The federally instituted system makes accommodations for students with disabilities, so that they can learn more effectively. But a teacher wouldn’t allow her son to have an extension on a test after a computer glitch prevented him from studying, she said. “Teachers are not properly trained,” she said. “Or, at least this teacher did not know that they needed to follow these plans.”

Mateo was also subjected to comments and jokes about his racial background, she added. “What we need is actual action,” she said. “The goal is to get these problems fixed.” Regina says she doesn’t believe the way the district has implemented its restorative justice program is working, either. “We want Mateo’s legacy to be an improvement in the systems that support vulnerable children,” she said. “He endured a great deal while he was in the schools here, and unfortunately, those issues—which I certainly brought up with the school district—have not been rectified.”

Ashley Perlitch, the moderator of the Scotts Valley Families for Social Justice Facebook page, noted concerned parents are encouraged to join the Scotts Valley Diversity, Equity, and Inclusion Community Group, which works on these issues. Regina says she wants to see more suicide prevention and mental-health outreach instituted, and, during their son’s Celebration of Life, the family pointed to Oakland-based foster child psychological-services provider A Home Within as offering useful solutions.

At the event, friends and teachers shared stories of a boy with a radiant smile who would go out of his way to make people laugh.

One teen boy told the mourners how Mateo was exceptionally kind and liked to include others in activities, such as when a girl asked to watch the Disney movie Frozen with them at the Scotts Valley Library.

And Cameron Ross, 14, said despite the limitations of digital schooling, it was actually during the pandemic that his friendship with Mateo blossomed.

“I remember all of us singing songs over Zoom,” he said, adding Mateo loved dogs, and was a fun guy who’d take on heroic challenges. “Mateo ate one of the spiciest chips in the world.”

He told GT he was touched by the pipe cleaner butterfly Mateo made for him.

“It was a selfless act,” he said of the gift. “I just thought it was a kind thing.

Randy Klein, one of his teachers, said when Mateo died it set off an emotional shockwave.

“His impact on our community is widespread,” he said. “I will always cherish knowing Mateo.”

When the official program had come to an end, Christina Miller, of Ben Lomond, she used to have a student in Scotts Valley, but pulled him out of the district over fears he might be a target for bullies.

“He couldn’t get out of there fast enough,” she said of her white stepson, adding she can only imagine how much worse the situation may have been for a child of minority background.

Crystal Hernandez, 35, whose 24-year-old cousin, David Hernandez, killed himself in November, said in an interview she made a point of coming to the event to show her support for Mateo’s family.

“It’s not easy to talk about suicide,” she said. “It’s a conversation that needs to be opened.”

As attendees began filtering back across the hillsides towards Scotts Valley, and elsewhere—now wearing “BE KIND” bracelets—Mateo’s mom expressed her gratitude.

“I thought it was beautiful,” she said of the assembly. “I really appreciated the community coming out.”