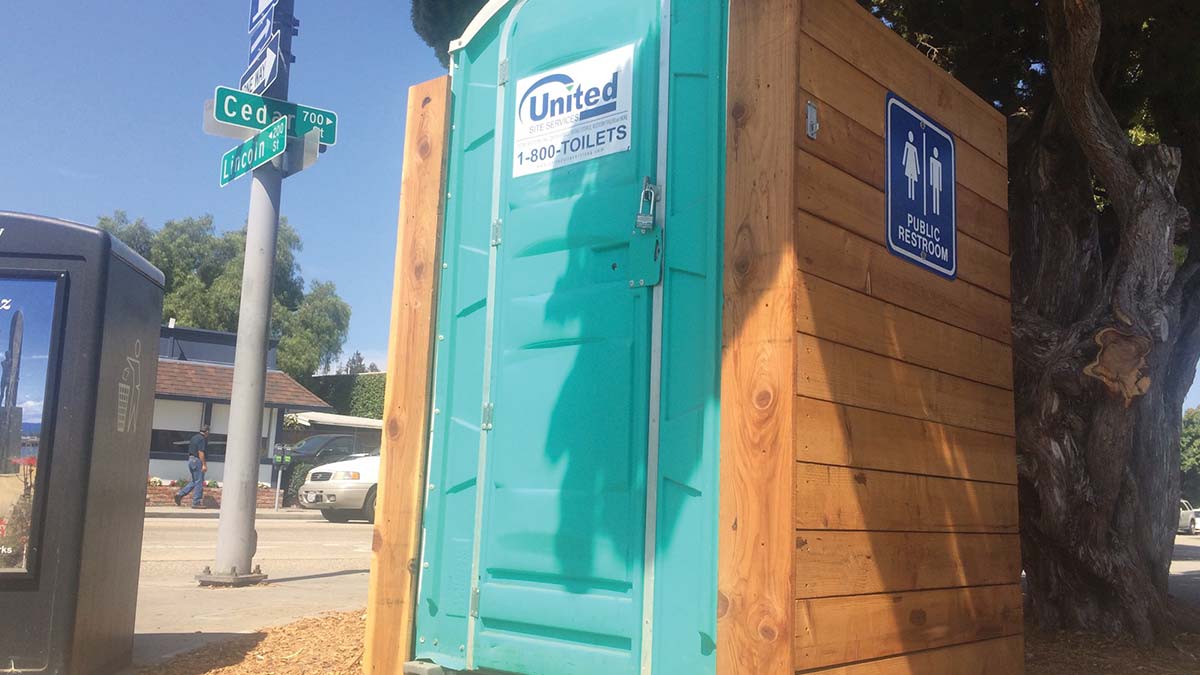 Public-service and homeless advocates don’t deny that having three bathrooms open late in downtown Santa Cruz is an improvement over three years ago, when there were zero. But despite two new nighttime-only bathrooms downtown, they still have issues with the city’s policy on bathrooms; for instance, the fact that none of the new portable facilities are handicap-accessible.
“That’s a big problem I have with the Porta Potties,” says Zav Hershfield, local activist and a member of the Give a Sh!t Campaign. “They don’t provide access for people who are handicapped or have a mobility handicap. They can’t get into those, so what are they supposed to do?”
The answer to that question is found in back alleys downtown, according to longtime homeless activist Brent Adams. That, he says, is where many people—not just the homeless—go to relieve themselves when they don’t want to wait in line for a restroom, or don’t have access to one.
“When people wake up and there is not a bathroom open, they have to get creative,” Adams says. “That means people go in bags and throw it away, they dig holes or they do it on the backs of [buildings]. It’s inappropriate, and we should do everything we can so that we never have to have that occur again.”
Installed in July for $10,000, the two toilets—one at Lincoln and Cedar, the other at Union and Cedar—are locked during the day and open from 10 p.m. to 6 a.m. every night. The city’s 24-hour portable toilet, which opened three years ago at Front and Laurel, is still open all day and night.
The city also has a visitor restroom program, where Santa Cruz pays downtown businesses a monthly $400 stipend to keep the restrooms open to everyone—customers and otherwise. But the only business currently taking part is Bookshop Santa Cruz, which has kept its restrooms open to the public for 24 years, long before the visitor program launched in 2009.
A city website on the program also lists two other participating businesses, Pizza My Heart and Cafe Gratitude, although both have recently closed their bathrooms to non-customers. Neither business could be reached for comment, but Julie Hendee, Santa Cruz development manager and downtown specialist, says both closed because of vandalism.  Hendee says she’s been doing outreach to other possible candidates.
This fall, city staff was also maintaining more-established 24-hour public bathrooms in the Soquel Avenue parking garage as part of a pilot program. In October, Scott Collins, the deputy city manager, told GT he was pleasantly surprised by how few issues they were having with the restrooms, and the city extended its three-month pilot program for another six months.
But Collins says problems began arising toward the end of November, and police started getting more calls for service.
Then in late December, public works employees began closing those bathrooms every night at 10 p.m., according to a city memo, after cleaning crews came to the facilities one night to find broken lights, a soap dispenser torn off, and the bathroom walls spray-painted and smeared with feces.
Crews cleaned and repaired the restrooms, according to the memo, and returned later that night to find the walls had been spray-painted again. Santa Cruz police don’t have stats on how many incidents there were at the bathrooms, but the memo stated that there were 250 calls for service over the previous 165 days, including a spike in the middle of December. Collins says most of those calls were late at night, but it isn’t clear how many of those calls were after 10 p.m.
The new portable toilets, which were trucked into Santa Cruz from out of the area, are the city’s latest pilot bathroom program, and Collins says staff will update the City Council in December, after about six months is up.
Many portable toilet companies, including local companies, declined to provide toilets to the city because of possible damage, says City Manager Martín Bernal. The city had looked into other options too, like the Portland Loos—stainless steel sidewalk toilet kiosks hailing from Oregon—years ago, but hit a wall when no businesses were willing to have the toilet near them.
Collins says the portable toilets are a low-risk option, as far as vandalism and damage go, since the plastic is repairable. The portable toilet on Front and Laurel streets burned down in October—the cause of the fire is unknown, but it cost the city $1,000 to replace it. The toilets are installed with a wooden frame around three sides to make them look nicer and also provide stability, making it harder for someone to knock them over.
Collins says it’s too early to tell, but the portable toilet system looks to be off to a good start. “The units are getting used and they haven’t been vandalized,” Collins says. “So from that perspective, it’s a win.”
Adams, who is working on a crowdfunded documentary about homelessness on the West Coast, cleaned the portable toilet on Front and Laurel streets for months. He says it’s unfair that even when a city doesn’t have enough restrooms for the homeless to use, they are still criminalized for relieving themselves outside, and that public bathrooms aren’t just a homeless issue.
“Late night you have lots of college students and tourists, people peeing all over town,” Adams says. “It’s not just about poor people.”