.From Tech to Climate Change Crusade 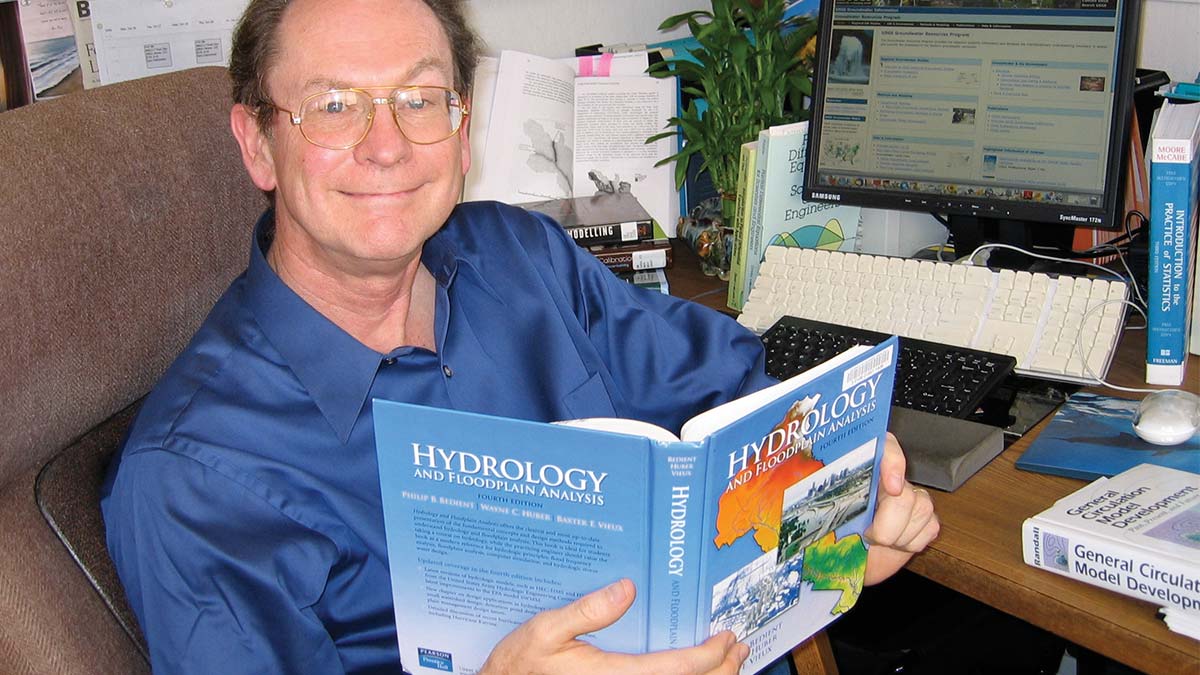 Bruce Daniels likes analogies.
For example, the 67-year-old Capitola resident says his most-recent life change—leaving his tech career at age 59 and entering a UCSC doctorate program in hydroclimatology—was like “jumping into a swimming pool.”
All of a sudden, he had to do calculus again, and it had been 30 years since he’d taken a math class.
At the time, Daniels was a successful software engineer. He began his career at Hewlett-Packard, then moved to Apple in the 1980s, where he wrote code for Apple’s early computers, the Lisa and its successor, the Macintosh. He then launched a startup that was bought by Borland, worked for Oracle, and later, for Sun Microsystems. He was considering a job offer from Google when he decided to take the plunge—quitting his line of work to study how the climate affects water supplies.
“I started getting a little antsy about that kind of work,” says Daniels. “Certainly going from the Macintosh and the Lisa to any other kind of job is a letdown. I mean, you’re doing a project that has some value and some interest, but it’s not like creating this new revolution in computing. I started thinking, ‘Well, is this really what I want to do?’”
Daniels was interested in water, and while working full-time in Silicon Valley, he had begun serving on Soquel Creek Water District’s board in 2000. He also served on a regional water quality control board.
He already knew UCSC earth science professors Andy Fisher and Lisa Sloan, who encouraged him to apply, and eventually became his advisers.
“I really wanted to do [the Ph.D], so I put lots of time and effort into it, and persevered. I wanted to do something that was important, something that wasn’t being done very much,” he says. “Climatologists can tell you about climate, precipitation and forecasts. But then there’s very few people who can relate that precipitation to groundwater recharge, and it’s not a simple relationship.”

Daniels is now Soquel Creek Water District’s board president, and spends most of his time traveling and speaking publicly about climate change and water. He wants to show people the science behind how warming temperatures threaten water supplies. He uses analogies to explain the complexities, of course—and they work.
He starts by describing the Earth’s atmosphere as a “little box.” It can hold a certain amount of water, known as humidity.
“You have to fill the box up completely, and then a little bit more before you get clouds, and then it has to fill up a little bit more to get rain. Then, essentially, when that happens, that box empties,” says Daniels.
Research shows that California’s rainy season, which currently runs from December to March, will shorten to an intense two-month season. The state’s weather patterns will become feast-or-famine—the storm seasons will be stormier and the dry seasons even drier, experts have said.
That’s because the Earth is warming. As humans burn fossil fuels, the amount of carbon dioxide in the atmosphere increases. It’s like sleeping with an extra blanket on the bed—you get hot, Daniels says.
“That’s kind of what’s happening on Earth. We’re putting extra blankets on the Earth. And that has to cause the planet to warm up, because more energy is being kept inside the Earth than is leaving the Earth, so there’s an imbalance,” he says.
As the planet warms, more water in the atmosphere evaporates into steam, like a kettle on a flame. That makes rain less likely.
Back to the atmospheric box analogy: “In the future, the box gets bigger. Often you don’t get enough water in the box to get rain,” Daniels says. “When you have rain, the box is now bigger, so that rain is more intense.”

The crux of why this matters, says Daniels, is that California’s groundwater—the water-bearing soil and rock from which wells draw—will not recharge like it once did. The ground can only soak in a certain amount. So when the storms hit harder in a shorter amount of time, more rainwater will run off and be lost, says Daniels.
He wants to sound the alarm that everyone in California needs to figure out how to make a sustainable water supply, and climate change needs to be factored into the solution. Since last year, he’s given dozens of talks to national groundwater associations, local water agencies and nonprofits.
One study that Daniels refers to in his talks shows that the Southwest, including California, has a more than 80 percent chance of experiencing a 35-year megadrought by the century’s end.
“California is a big agricultural state. What will happen if we get 30-year droughts? We’re going to have to make big changes if we’re going to survive this thing, and if our descendants are going to survive this thing,” Daniels says.
The water business must adjust, he says.
“A lot of the people who are working in the field don’t really understand this connection. They kind of know that climate probably impacts the water, but they don’t know the details. They don’t know the numbers behind it,” Daniels says.
Daniels, who wrote his dissertation on California’s rainfall records, says the state’s weather patterns began to come off the tracks around the year 2000. Between 1900 and 2000, only 30 years were considered “dry years.” But now, out of the past 15 years, 11 years have been dry. That’s a huge increase, Daniels says.
“It’s almost like someone snapped their fingers and the world started working differently. There’s a lot of research going on exactly to that effect—it’s called Arctic amplification. Basically, as the Arctic warms up, the temperature difference between where we are and the North Pole is less, and it’s that difference that drives the jet streams,” says Daniels.
“And if the jet stream is driven less energetically, the jet stream slows down. Just like a river, it meanders more, and it may tend to get stuck in a particular pattern.”
Daniels stresses the need to understand the problem.
“There are all these surprising things that are happening out there, and most of them aren’t good,” he says. “We need to start thinking about how we deal with it.”