.In the Studio with Hildy Bernstein 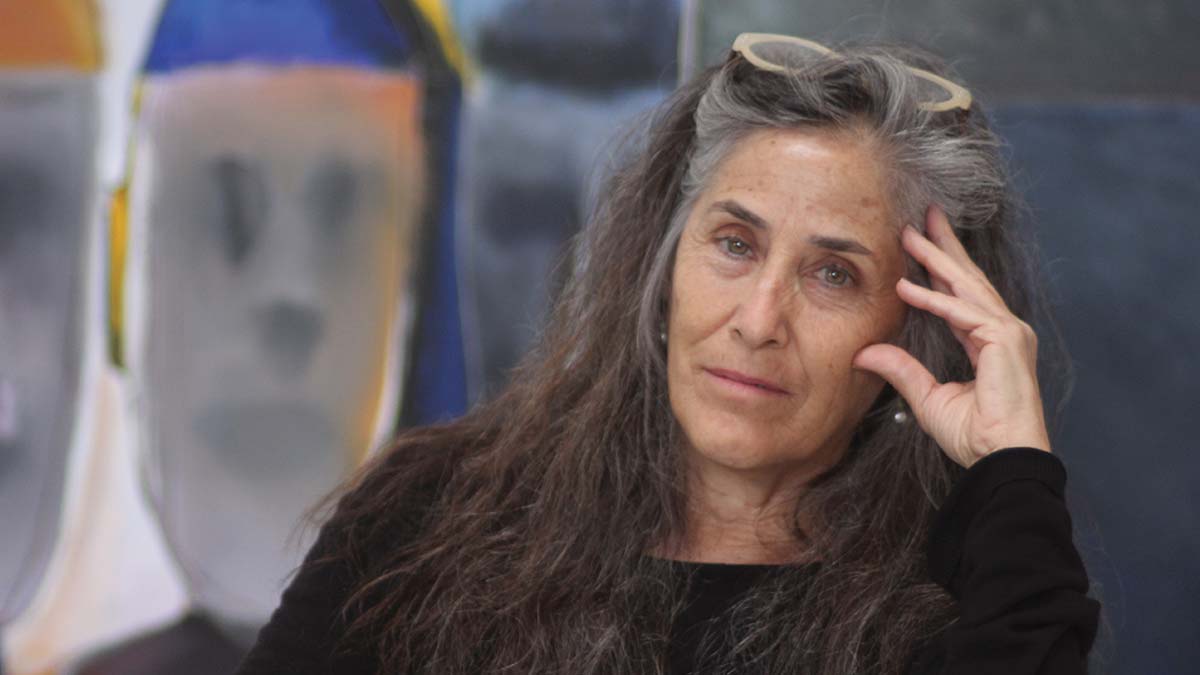 I first encountered the work of Hildy Bernstein at a group show four or five years ago. The paintings I saw were quiet atmospheric landscapes, no figures, and saturated with mood. But last month I saw another aspect of Bernstein’s recent exploration of life, death, and what materializes between here and there.
In a show of deceptively undramatic work, dramatically entitled “Love and Death,” Bernstein revealed her edgy evocation of loss and the unseen world of spirits. The work was as powerful as it was minimalist: A boy, drawn in graphite, stood in a nighttime of black and white acrylic with a gun in his hand. Faces, barely perceptible, emerged Etruscan-like out of an empty canvas. Beautifully composed portraits of no one in particular shimmered with a corona of pale disembodied heads. Magic realism at its most mysterious, I thought, unable to shake Bernstein’s tough and tender images. “The faces of the unseen.” That’s how she describes some of the images that seem to push upward toward the viewer from another world.
Bernstein’s artistic arc achieved orbit somewhere between the drawing classes she took as a girl at Manhattan’s historic Art Students League and the creative homecoming she experienced at the renowned Naropa Institute in Boulder, Colorado. “At Naropa I had become part of a Buddhist community—psychology, religious studies and the arts—it was the tripod that made absolute sense to me.”
After eight years in Colorado Bernstein says she knew she was ready for “the next phase” of her life. Gathering her instincts and her 2-and-a-half-year-old son, she arrived in Santa Cruz going on 30 years ago. Into her life came dance, movement, massage therapy and a Daoist study group. The Daoist idea of returning to one’s true self sparked Bernstein’s return to visual art in the late ’90s. “But I promised myself that I would return only for the pleasure of it,” she says. “I had to do it for the joy of it—I was just going to start in and let it unfold. And I’m still in it.”
Showing her work for the first time in 2001, Bernstein now does several shows and Open Studios each year, staying true to her creative spiritual quest. “Nature and human nature, I go back and forth between the landscape and the figure,” she explains, eyes gleaming bottle-green. “My figure work draws me into such a dark mysterious place—life and death—that I have to step back from that and return to something greater than human experience,” she says, pointing to a haunting, highly abstracted landscape. “I have to get to a bigger view.”
One of her goals as a painter is to spark an emotional response. “That’s the miracle of painting,” she says. “All this paint, and these marks, and it becomes something that you can feel.”
Influenced by the aesthetic of Japanese art, especially her studies of Japanese tea ceremonies, Bernstein embraces the minimal in her visual work. “People might think that I underpaint,” she says, showing me a series of stark charcoal and acrylic heads, “but I love that. I love how the faces seem to appear out of nothing.”
Loss and death have figured into Bernstein’s personal life lately. “I am painting my way through these experiences,” she says. Her mane of extravagant hair almost comprises a visual lament. “The paintings are taking us into a story,” she admits. A story that can’t be photographed. A man at night standing in an ocean of rising water. “How do I make sense of what’s going on in the world?” she asks rhetorically. “Maybe it’s my own mythology.” Or maybe she’s bearing therapeutic witness. Ready with paint and canvas to see what happens.
Living simply, as she describes it, has enabled Bernstein the freedom to pursue what she loves; “to just paint.”
For more info and to see her work, visit Hildy Bernstein’s profile on artslant.com.