.As the Frequency of Natural Disasters Rise, Cities Like Santa Cruz Are Left Behind 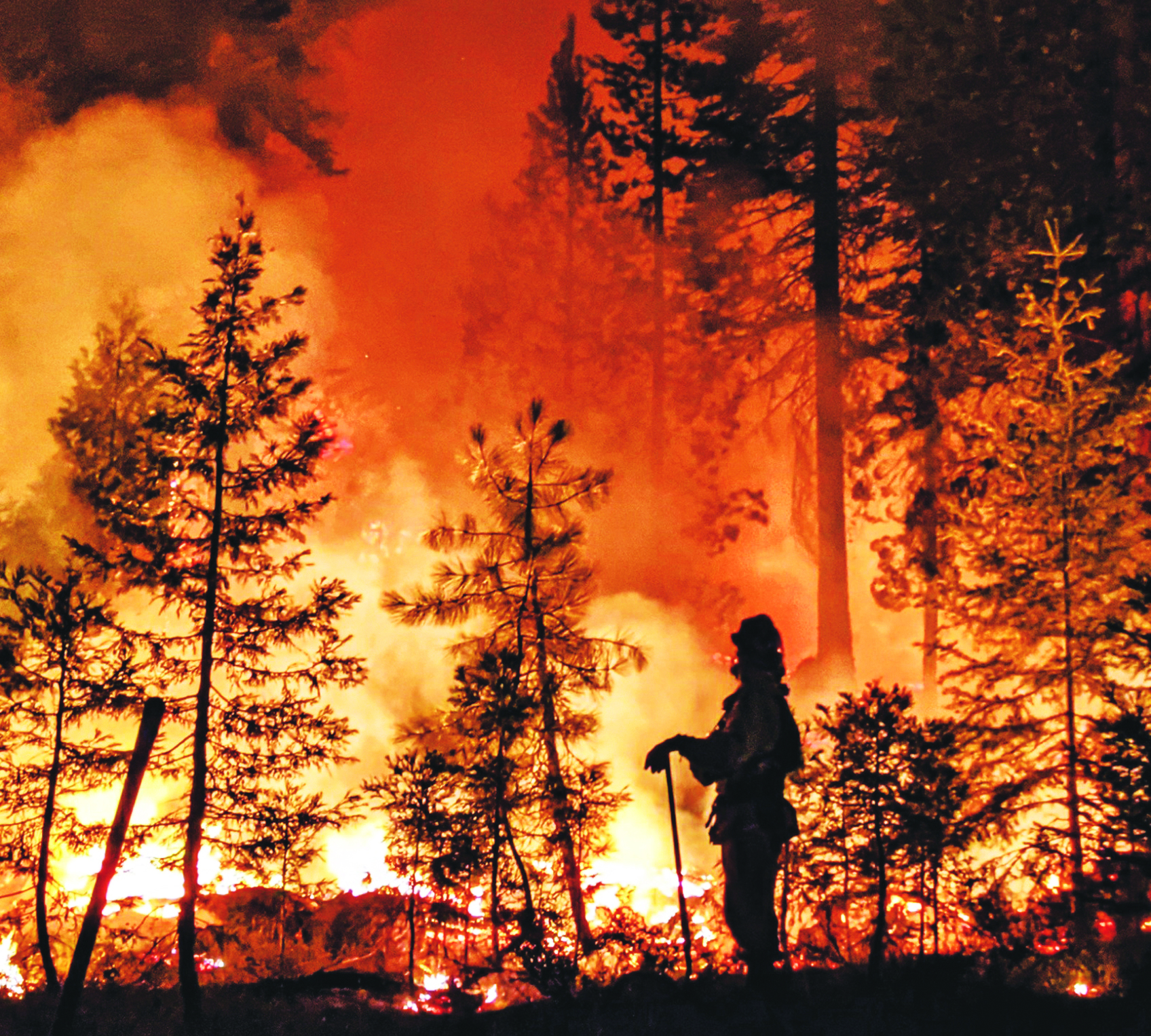 How do you predict the monetary consequences of natural disasters?

It’s not a new question for city managers or county administrators, who contend with the financial implications of natural disasters as they draw up a budget each year for their jurisdiction to follow. What’s important, they say, is to have a rainy-day fund—money set aside for those unpredictable expenses that inevitably arise throughout the year.

Then came the fires. The CZU Lightning Complex, the largest blaze in Santa Cruz County history, cost more than $68 million to fight, and destroyed 911 residences across the county.

Both of these natural disasters had devastating effects on county and city budgets, says Coonerty—and budgets have yet to recover.

These natural disasters appear to be here to stay. On Feb. 17, Gov. Gavin Newsom set forward a plan that treats Covid-19 as an endemic virus. “We have all come to understand what was not understood at the beginning of this crisis—that there is no end date,” said Newsom.

And just last week, the United Nations Environment Programme released a report that predicted the number of wildfires to rise by 50% by the end of the century.

“​​The new normal is some level of crisis or upheaval, and so whether it’s the pandemic, or fires, or hospital closing, or a flood, or a drought, the reality is we’re gonna face some of these uncertainties every year,” says Coonerty. “We’re gonna spend funds to address them, and they’re going to have some sort of impact on our economy.”

City budget reports across the county show that revenues, particularly sales taxes, are trending closer to pre-pandemic levels. But rising oil prices, interest rates and the unknown consequences of the Omicron variant on tourism are all chipping away at the city of Santa Cruz’s budget, and offsetting other gains, said City Interim Finance Director Bobby Magee at a council meeting in mid-February.

If the city maintains its current level of spending and doesn’t find a new revenue stream (what’s known as a “structural deficit”), the city will run out of its reserves by 2028. “At that point, the city is completely out of money,” said Magee, who reported that the city will need to make $2.5 million in cuts in the upcoming fiscal year.

Even though the pandemic has accelerated spending, Santa Cruz’s community needs have been outpacing revenues for a number of years, says City Manager Matt Huffaker.

Huffaker pointed to Santa Cruz’s homeless issue, which has worsened during the pandemic, as one of the most significant challenges the city continues to face. Currently, Santa Cruz has one of the highest per capita unhoused populations in the state. Santa Cruz also has a backlog of more than $300 million of deferred infrastructure and capital needs, from roads to parks, says Huffaker. The city was projecting increasing budget deficits in 2018—long before the pandemic even began—that would last over the next five years.

“In some respects, the pandemic created kind of a perfect storm of challenges from a budget standpoint,” says Huffaker. “It exacerbated the structural budget challenges we’ve been facing.”

Santa Cruz isn’t an outlier: cities across the country are facing budget shortfalls ranging from 1.9% to 17% of the prior year’s general fund adopted budget, according to Pew research. Cities often relied heavily on dedicated reserves for temporary relief.

Santa Cruz has by far been the city hit the hardest by the pandemic in Santa Cruz County.

Although other cities, like Capitola, expected the pandemic would drain budget reserves and lead to severe budget cuts, the reality actually looks different: this year’s sales and hotel taxes are bringing in $900,000 more than estimates, and all other general fund revenues ended the year approximately $100,000 ahead of estimates.

But when the pandemic first caused shutdowns in March of 2020, Capitola City Manager Jamie Goldstein was shocked by the severity of the economic downturn. What started as a $400,000 budget shortfall quickly plummeted to more than $2.1 million, in part due to a lack of hotel and sales tax revenue.

Capitola’s economy is structured around tourism, with hotel and sales tax contributing nearly $2 million in revenue in this past year. At the start of the pandemic Goldstein worried about the hit tourism would take, but as the pandemic progressed, he watched as revenue climbed back to pre-pandemic levels.

“I think one of the interesting things that, frankly, really surprised me is, throughout the pandemic, how strong the tourism sector remained,” says Capitola City Manager Jamie Goldstein. “[After the shutdown], we started to see a rebound and have continued to see higher rates of visitation than we saw prior to the pandemic.”

Similarly, Watsonville’s budget has remained relatively intact throughout the pandemic, in part thanks to a sharp rise in online and local shopping. Watsonville has enjoyed climbing tax revenues from restaurant, hotel and construction industries.

In all, Watsonville will bring in roughly $1.2 million more in general fund revenues than initially projected for this fiscal year. But that city’s finance director advised proceeding with caution, as the majority of that money will be accounted for due to increased costs and additional expenses, and these numbers are beginning to drop off.

Huffaker, who was formerly city manager for Watsonville, says the reason smaller cities like Capitola and Watsonville were not hit as hard by the pandemic can be attributed to different public service demands, community needs and economies.

“Our local economy had to unilaterally shut down,” says Huffaker. “We had already been struggling to respond to the ongoing impacts of homelessness, housing instability and climate change. Now, our services are significantly strained.”

The County’s ​​expenses are expected to continue to outpace revenue for the next five years, according to a report by County Budget Manager Marcus Pimental at a Board of Supervisors meeting on Feb. 15. Without any remedial actions, the county is facing an imbalance of $7.67 million to close out the fiscal year this June.

“In the last four and five years, this County has been doing a lot to extend itself,” said Pimental. “Between Covid-19 and the CZU fires, those two events, we’ve dumped over $150 million in support, and we’re not getting that revenue back. That’s a third of our reserves.”

The county’s budget must balance threats of climate change and bear a large chunk of the financial burden of the pandemic, while also serving approximately half of the county’s population and providing services that cities do not. This has led to systematic underfunding, said Pimental.

Because of how the county is divided geographically, 50% of residents live in unincorporated areas and depend on county-funded public services. Prior to the pandemic, the county had increased contributions to its general fund by $37.4 million, to absorb cost increases like wages and benefits.

This year, the Pimental estimated that the county’s spending could be as much as $10.6 million higher than was originally anticipated. This is because of unanticipated costs, like the $5.5 million contribution to the Pajaro Valley Healthcare District to help with the purchase of Watsonville Community Hospital, and $7.1 million in pandemic-related expenditures. Meanwhile, Federal Emergency Management Agency (FEMA) reimbursements for other emergency responses are up in the air.

The county’s primary revenues, property tax and vehicle licensing fees, are increasing, but still remain below pre-pandemic growth rates. But the transient occupancy tax (TOT) and sales tax are exceeding the county’s projections.

“I think with these numbers, we will be able to recover most of [what we lost during the pandemic],” says Pimental. “But we’re not well-positioned to do that again.”

Last July, faced with looming budget deficits, Santa Cruz City Council discussed bringing voters a proposal that could help the city generate more revenue: a new sales tax. The proposed tax increase would have raised the sales tax rate in Santa Cruz by half a cent, from 9.25% to 9.75%, and would have generated approximately $6 million a year.

But the council failed to unanimously approve the measure, effectively missing the deadline for the measure to make the November election. The lone holdout vote was Councilmember Sandy Brown—the council needed a unanimous vote because it was declaring a fiscal emergency.

This year, Santa Cruz is taking another stab at increasing the sales tax by half a cent. This time, Brown is on the Ad Hoc Committee in charge of drawing up the details for the measure.

Being a part of the process, Brown says, has helped shift her opinion on supporting the measure. But more importantly, she sees the city making a greater commitment to ending homelessness and supporting city workers in a way that she didn’t before.

“I personally don’t like reliance on sales taxes and increasing sales taxes, because they do affect the low income people much more greatly as a proportion of their income,” says Brown. “But I also understand that we are limited in what we can levy taxes on.”

The proposed tax would help the city increase its investments in homelessness and housing affordability, says Huffaker, in alignment with what the community said is a priority, according to recent polls. The most recent polls show support for a sales tax has dropped from 69% in April of 2021 to 59%. Despite the drop, Huffaker says, that points to majority support from residents.

And if the measure doesn’t pass?

“I think the community can expect additional cuts to services and a reduction of the standard of the services that we’re able to offer us as a city,” says Huffaker.

The proposed measure will be presented to the council on March 8, where it will decide whether to take the measure to voters in June or wait until the November election.

At the county level, the Board of Supervisors approved two items for the June ballot which, if approved by voters, will increase taxes on hotels and vacation rentals, and change the way fees on single-use disposable cups are used.

The hotel and vacation rental tax increase would raise the rate to 12% for hotels and 14% for vacation rentals, paid by the visitors. Currently, visitors pay 11% in TOT fees. This increase could raise $2.3 million annually, and would fund wildfire prevention and response, street repair and public health services.

Currently, businesses in the unincorporated parts of the county charge a 25-cent fee when customers use a disposable cup, a charge sought to push consumers to use reusable options. The money collected from the fee currently goes to the business, but in June voters will decide if the fee collected could be split evenly between the county and businesses. This would bring in an estimated $700,000 annually for the County, money that would fund areas such as water quality, public health and other general services.

As the county balances its budget, these measures are critical, says Pimental. It would allow some of the budget to be freed up to invest in facilities, and to be set aside in the case of an economic slowdown or another emergency response.

“California is ahead of the game in realizing that climate action is really going to create an ongoing emergency risk, and Covid-19 could be an ongoing endemic issue,” says Pimental. “But we’re not funded for that. We can barely sustain ourselves.”