.Is Barre the Next Zumba? 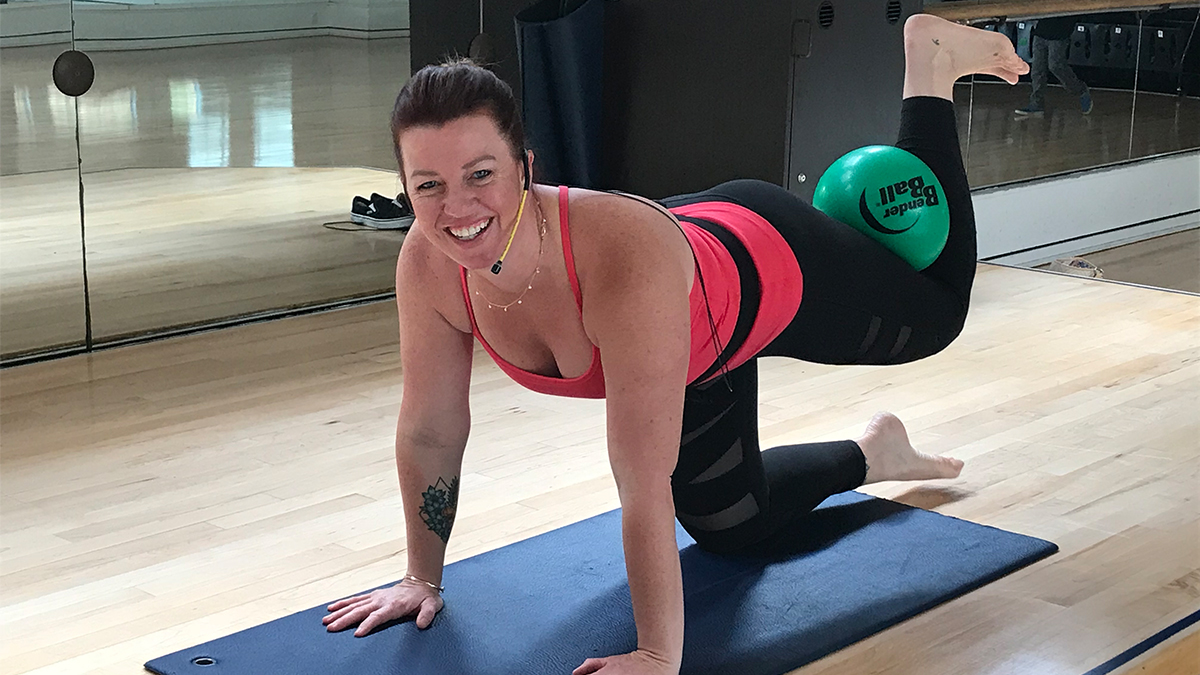 Donning knock-off Lululemons and the finest compression-wear a Groupon can buy, I timidly entered the studio of my first ever Barre class at Inshape Fitness in Capitola with one goal in mind: “Fit In.”

Almost immediately, I realized this might not be possible. Stretched out before me, from wall to mirrored wall, were 35 women. I couldn’t help but notice as they stretched and talked among themselves that their Lulus looked real. Picking up on my confusion and borderline desperation as the only male in attendance, 36-year-old Barre instructor Lindsey Brookman greeted me warmly and guided me to the equipment section.

For the one-hour Barre class I would need a cushiony yoga-esque Barre matt, a yoga strap, a rotating disc (think Frisbee that spins around), a small green exercise orb/ball, and a set of weights. “One pound or three pounds?” asked Brookman. That one was easy. “One pound,” I answered, quietly. I headed back to my inconspicuous corner spot by the barre (ballet bar) and the class started with a bang—actually a “Boom!” The surround sound speakers pulsated, bathing the room with an upbeat and eclectic mix of music- from ’90s alternative to Ellie Goulding.

Since Black Swan was released in 2010, the popularity of barre has really taken off. Barre “chain” Pure Barre has more than 300 locations nationwide and “The Barre Method” has more than 80.

“Pretty much all of our Barre classes are completely full,” Brookman says. “It’s really been exciting to see Barre grow from maybe three people each class to over 40 in some of my classes.”

Brookman likes to sing along with the songs she carefully selected for the class and when the Spice Girls came on she couldn’t help but yell “So I’ll tell you want I want, what I really really want!” And, for an hour, she told us exactly what she wanted.

The workout begins with a quick warmup and a series of upper body exercises. “We are here to strengthen and lengthen!” Brookman shouts wildly. The 1-pound barbells which had seemed so darn puny, quickly became pumpkins that I strained to lift.

The free weights, planks, push-ups and other moves to target the triceps, biceps, back, and chest muscles left me breathless and my whole body aching. Next, it was barre time. Channeling my inner ballerina, I gripped the ballet barre and used my body weight as resistance to focus on my butt and thigh muscles. I’m so glad no one filmed me trying to keep the fitness orb/ball between my legs, or slipping and sliding on the rotating disc.

The barre is used as a (much needed) prop for balance while doing exercises that focus on isometric strength training—holding your body still while you contract a specific set of muscles. It’s all about high reps of small range of motion movements.

“People are really seeing results in their muscle tone,” says Brookman of the effectiveness of smaller movements and smaller weights. Brookman tells me that Barre is a cross between, yoga, pilates, and ballet, and is core-focused. The core is engaged and specifically targeted in a balanced workout that combines cardio and strength training. I didn’t believe I even had a core before this workout. Now, I feel it.

The one-hour class ends with a cool down—a much-needed period of gentle stretching to increase flexibility and allow tired muscles to recover. As I lay in my corner during the two-minute corpse pose I simply couldn’t believe how amazing I felt.

Brookman’s classes are a hot ticket. Those craving one of her classes, or any of the Barre classes offered at Inshape Fitness, routinely show up at least 15 minutes early to snag a coveted spot at the barre.

My hour of Barre with Brookman and 30 other barre-belles was the most complete workout I’d had in years. I asked my Barre instructor why I was the only guy in her class and if men regularly take her classes. “Maybe the ballet makes some guys nervous,” she says. “Usually when guys lift they lift heavy. I did have a burly guy come to my class and he was like ‘oh my God!’ He was shaking and sweating … and he came back! I’d love to see more men take my classes—usually they just joke about it.”

Previous Article5 Things to Do in Santa Cruz May 2-8