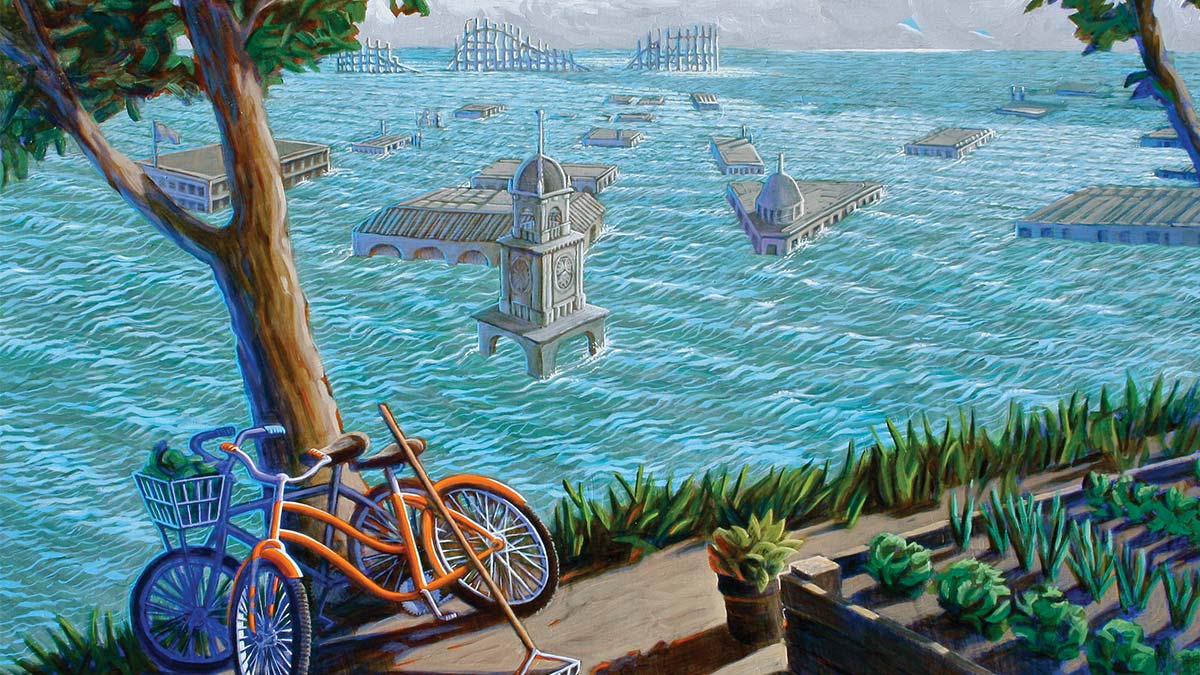 When climatologist Jeffrey Kiehl was giving a lecture 15 years ago about global warming, he tried something many scientists would see as revolutionary. He looked into the eyes of audience members, many of them skeptics, and stopped to ask them a question: “How are you feeling?”
People who might otherwise dismiss climate change as a joke or a phony political ploy started opening up about how all this information was scary and difficult to absorb. Kiehl, who will be speaking as part of a panel on climate change next month, started using this approach in discussions every chance he got.
“I often hear ‘I’m overwhelmed. This is helpless. This can’t be happening.’ All of these responses are natural for people,” says Kiehl, who studied Jungian psychology. “When you’re presented with extremely disturbing information, either personally or globally, a natural human reaction is to feel overwhelmed, feel sadness, feel it’s hopeless. I like to get people to talk about that, because one of the important things is to get people to open up to the fact that this is a problem that has a lot of emotion attached to it.”
Last year, Kiehl moved from Boulder, Colorado to Santa Cruz, where he serves as adjunct professor at UCSC.
On Feb. 5 and 6, he will be taking part in an event called Climate Change: The Moral Dimension at Peace United Church on High Street in Santa Cruz.
Kiehl was an expert focused on climate change predictions for the National Center for Atmospheric Research for more than 10 years before he began wondering why so many people were ignoring the mounting scientific consensus that global warming is real, and that it could alter the fate of our planet for centuries. “I decided there had to be psychological reasons to just march on toward the cliff and deny that this was going on,” he says.
That’s when Kiehl decided to go back to school for a master’s program in clinical psychology, which he finished in 2000. He now understands the psychological phenomenon of deniers as little more than cognitive dissonance—a discrepancy between facts and perception. It can be a confusing phenomenon, though, for someone in the throes of it. The emotions that deniers usually feel—shock, denial and re-directing of blame—match the signs of a trauma, all of which makes perfect sense, Kiehl says, because the findings sound earth-shattering, especially at first.
But as Kiehl starts getting people to talk about their emotions, encouraging them to ask him questions, something interesting happens. “It allows another way for people to hear the information about climate change and actually psychologically take it in at a rate or [in] a way they can assimilate it, rather than it being absolutely overwhelming,” he explains.

“I often hear ‘I’m overwhelmed. This is helpless. This can’t be happening.’ All of these responses are natural for people.”

“This makes it participatory,” he adds. “It’s no longer me talking to people. I get to hear what they think or feel about this issue. It’s a far more integrative way of involving people on this issue.”
Kiehl says, when talking to deniers, it is best to invoke what he calls “The Five Basic Facts of Climate Change”—four scientific observations and one law of physics. The first is that carbon dioxide is increasing in the atmosphere—a figure experts have been tracking since the 1960s. To go back before that, scientists refer to ice records in the Arctic, where deep in the ice core are bubbles filled with air that froze long ago.
Kiehl says that some people then ask how we know that growing carbon emissions are manmade and that they aren’t coming from natural sources, like volcanoes. He explains that the carbon in the air is a different and lighter kind than what’s found beneath the earth’s surface.
The third fact is that carbon dioxide is a greenhouse gas, which traps heat—as Irish scientist John Tyndall first discovered and laid out in 1860. And, as a result, the earth’s greenhouse effect is increasing along with carbon in the atmosphere, Kiehl’s fourth point. That increase is trapping more and more radiation inside the planet’s atmosphere.
The fifth and final fact is that physics shows us that energy cannot be destroyed. That means this radiation has to show up somewhere, and it will therefore show up as an increase in temperature.
After he has laid out these scientific findings and started a little discussion, he likes to end his lectures on a positive note, because climatologists, Kiehl says, often don’t talk about solutions.
Kiehl explains that there are ways of creating energy that don’t burn fossil fuels, and that many countries have started moving in that direction. He calls California the “gold standard for what you can do in the United States and what you can do to reduce fossil fuels.”
Not long ago, he notes, many people felt strongly that we needed oil and coal to sustain economic growth. Studies have since shown no correlation, however, between switching to renewable energy and economic struggles. More significantly, Kiehl says it’s now possible that the country might actually grow more stable if Americans decrease their dependence on fossil fuels, based on the current financial scare that’s being blamed on the declining price of oil.
“This is a tremendous opportunity to leave people with a better world. Really, that’s where I leave people,” he says. “If there’s one message that I can get across to people, it’s, ‘Yes, it’s a problem. It’s a very, very serious problem. But it is also a tremendous opportunity to transform society and create a world that will be so much better.’”

‘Climate Change: The Moral Dimension’ will be held at 6:30 p.m. on Friday, Feb. 5, and 9 a.m. on Saturday, Feb. 6 at the Peace United Church, 900 High St., Santa Cruz. There will be art and performances. Kiehl will speak on Saturday. The event is free and open to the public.