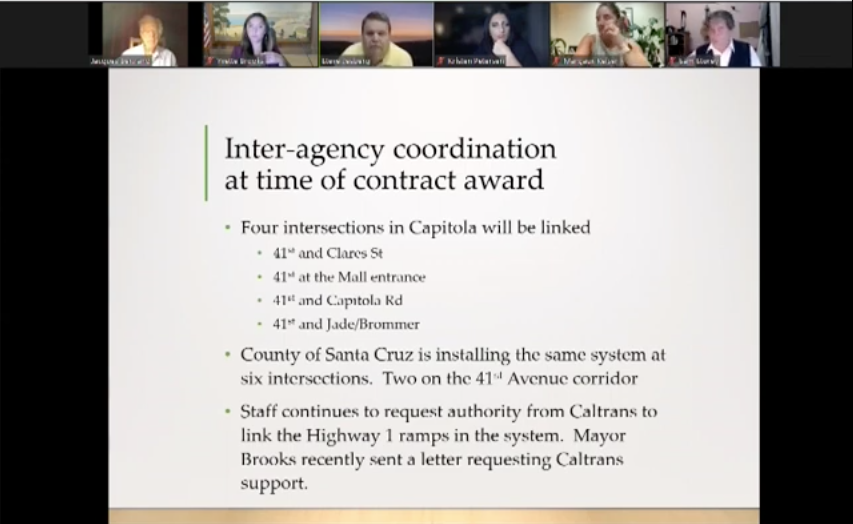 Synchronized traffic lights, otherwise known as the ‘green wave,’ are coming to 41st Avenue in Capitola.

Caltans is teaming up with the city of Capitola to bring drivers synchronized lights all the way down 41st Avenue to the northbound and southbound highway ramps.

The City already had plans in place to bring the green wave, a term that refers to when drivers catch all the green lights down a busy street, to 41st Avenue. After initial attempts to contact Caltrans yielded no results, the City moved forward with its plan to synchronize lights up until the highway onramps.

But now, drivers can expect the coordinated lights to extend through the highway entrances, thanks to the new deal struck between the City and Caltrans approved by City Council on Thursday night.

The green wave, a studied concept that has been in place around the country since the 1920s, has been proven to reduce traffic congestion and reduce fuel consumption and emissions.

The city has been working on this project for the past three years, and hired construction agency, Bear Electric Solutions, is expected to begin work on the intersections in December.

A woman who identified herself as Janet called in to give her support for the deal.

“I applaud you at doing this adaptive signaling project,” she said. “It has been a piece that has been needed to help with some of the traffic problems on 41st Avenue.”

During the meeting, council member Kristen Petersen also gave an update on the City’s state-mandated affordable housing goals. Peterson reported that Capitola will need to create an estimated 726 housing units during the upcoming cycle which will begin June 2023. Around 214 of those units will need to be accessible for those considered very low income, which will begin June 2023. The City will have around eight years to accommodate these units.