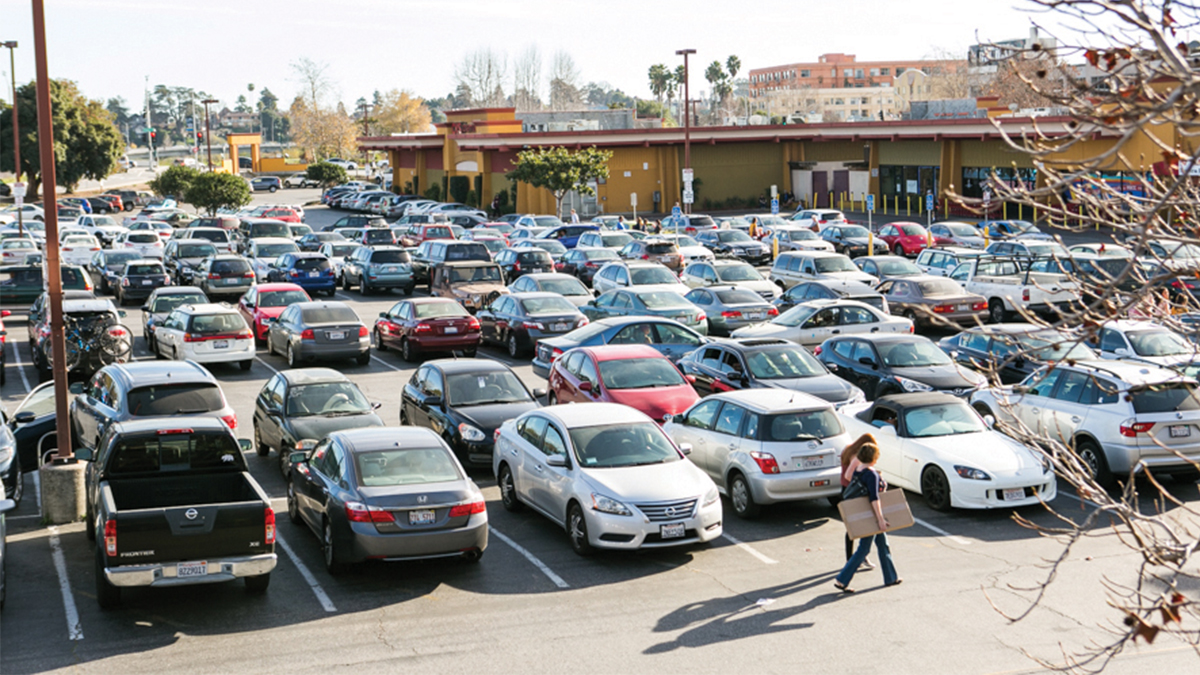 It’s 7 p.m. on Friday night, and the worst traffic jam in all of Santa Cruz is the Trader Joe’s parking lot.

“I couldn’t find a parking spot for a long time,” says Ishani Chakraborty, as she pushes her cart full of Trader Joe’s grocery bags out the store’s front door to the very far corner of the lot.

Before she can finish the thought, a pale blue Honda Fit pulls up to her left: “You leaving?”

Chakraborty, a fourth-year student at UCSC, says she is, but when she tells the driver where she’s parked, he darts off.

Chakraborty says it had taken her 10 minutes to find her spot, and when she finally did, she found herself speeding the wrong way through the parking lot—an anecdote she’s embarrassed to relay because she doesn’t normally stoop to such indiscretions.

“But otherwise it would have been a lot longer,” she says, as three cars descend on us, their drivers eyeing our path. “I was just about to turn around and go home.”

Chakraborty says she doesn’t think she’ll ever shop at Trader Joe’s on a Friday night again.

Inside the store, the mood is calmer. Just over half of the store’s nine cash registers have someone working them. There isn’t more than one person in any line—in stark contrast to the mayhem unfolding outside.

That’s because the two hours’ free parking at Trader Joe’s is the worst-kept secret in all of downtown Santa Cruz, especially on entertainment-filled Friday nights. Across the street, it’s First Friday at the Museum of Art and History, where curators are unveiling a Monarch butterfly exhibit. Foodies and music lovers are crammed into Abbott Square, where they’re enjoying poke bowls, specially crafted gin and tonics, and vegetarian dishes, as local reggae rock group the Leftovers jam onstage near the Octagon building.

Parking has long been among the the most controversial issues facing downtown, especially with the city getting ready to weigh a possible multi-story parking garage, combined with a new library, sparking big questions about Santa Cruz’s long-term vision.

Lately, I’ve found myself more personally fascinated by the ever-worsening log jam at the Trader Joe’s lot—especially when the store’s interior looks like a ghost town on many weekend nights. (Friday night, I’ve found, is the best time to walk or bike to the store.) Surely, I figured, the store’s corporate offices would have something to say about it, but company spokesperson Kenya Daniels referred GT instead to the property owner, who did not return multiple voicemails seeking comment.

Even so, the store’s local employees sure are sick of hearing customers complain about the parking situation, which they say worsened as the towing policy changed.

“A lot of people are coming in and saying that they had a hard time finding a spot,” explains one experienced downtown Trader Joe’s employee, who asked to remain anonymous, given both the sensitivity of the issue and weariness at the store’s corporate office of any potential controversy.

The parking debacle extends beyond customers. The employee says that occasionally a crew member will have a shift that starts after 4 p.m., which forces them to leave for work early and circle the lot with everyone else, looking for a spot.

Complicating the matter is the fact that the security company in charge of policing the lot has changed twice over the past few years, the employee says. A few years ago, a different security company was in charge and had a much more aggressive towing policy, to the point that trucks were towing the cars of the store’s crew members. The employee doesn’t blame Trader Joe’s, but says that owner Howard Properties doesn’t take the situation seriously enough, and hasn’t prioritized enforcement of the two-hour parking limit.

Enforcement, though, involves towing cars, which often isn’t a popular solution—especially to anyone who’s ever had to get a lift to Live Oak and pay a several hundred dollar fee to pick up their car.

Ben Goodell, who works for Securitas Security Systems, is the daytime guard at the Trader Joe’s lot. Goodell—who has a brown wispy mustache and is wearing a grey beanie—says he has actually been ramping up enforcement of the two-hour limit lately. He says he’s been leaving warnings for cars that he sees go over the limit and writing down their license plate numbers, with the intention of calling a tow truck if someone offends a second time. Next month, they may tow more, he says, in hopes of increasing turnover at the lot. Goodell adds that a guard like himself technically has the authority to tow a car whenever a driver parks and then walks off the property.

Meanwhile, at the city level, plans for the future of downtown’s public parking are inching along.

The Downtown Library Advisory Committee has recommended building a brand new first-floor downtown branch with five levels of parking above it. According to the architects who studied the city’s options, that route is far cheaper than doing a full remodel of the current building or tearing it down and starting over from scratch. The garage portion would seek separate funds.

Jim Burr, Santa Cruz’s transportation manager, says the city will present a much-anticipated parking study, with updated figures on expected demand, to the Downtown Commission on Feb. 22—a meeting that’s sure to draw a big crowd of environmentalists who oppose building any new parking whatsoever.

Another person eager to take a close look at new data is Chip, the executive director of the Santa Cruz Downtown Association. The organization’s board hasn’t taken a position on a possible garage because it wants to see the numbers first. Chip, who’s optimistic about the possibility, notes that no one knows how the city would pay for a multi-million-dollar garage. Ridesharing apps and other changes, he says, have shifted the transportation landscape, too. “So I think there’s a lot of unknowns,” he says.

The city’s transportation experts are investing in car-free options as well.

Transportation planner Claire Fliesler says Santa Cruz is gearing up to launch its new bikeshare programs after a few more hearings, which continue into the spring. The city will create 26 new bikeshare stations, including two that will be converted from car parking spaces downtown.

Cycling, she says, is a better alternative to driving than ever, and the easiest way to avoid hassle.

“A great way to not face the parking problem,” Fliesler says, “is to ride your bike, take the bus, or use the new bike share program.”

Next ArticleCraft Beer Event Twisted Tasting Is Back