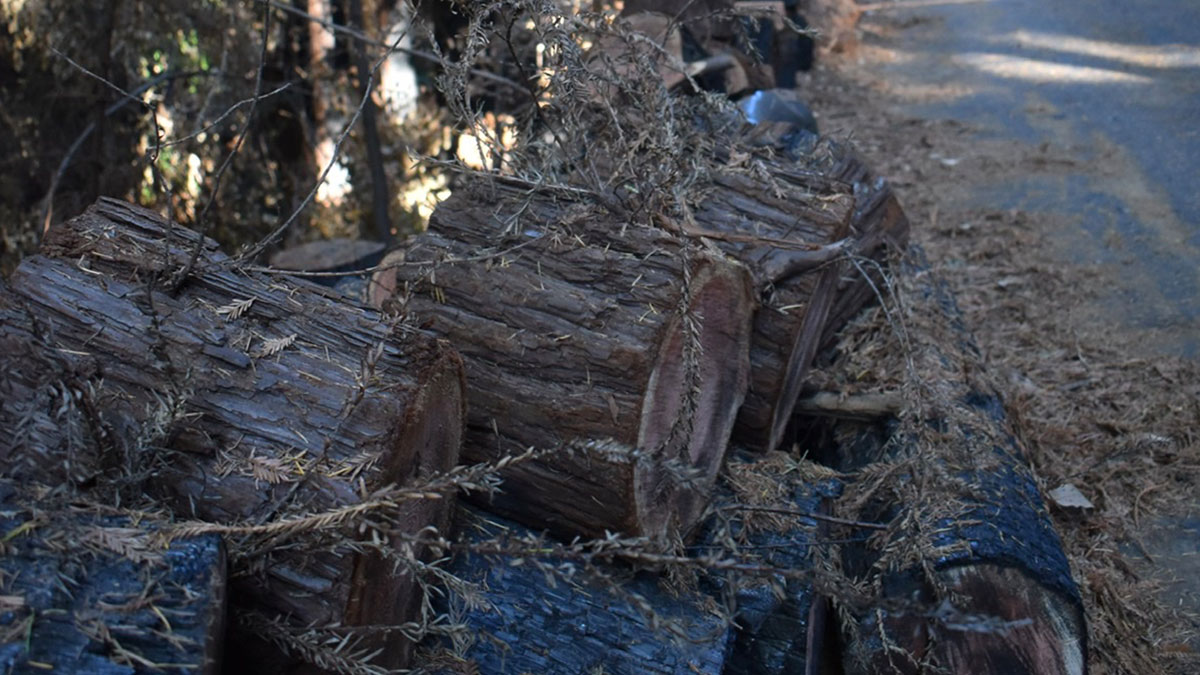 The Santa Cruz County Board of Supervisors on Tuesday unanimously agreed to file a complaint with the California Public Utilities Commission against Pacific Gas and Electric Company for what officials say is unpermitted timber harvesting and other activity in the wake of the CZU Lightning Complex fire.

As part of the resolution, county officials will contact the Santa Cruz County District Attorney’s Office, California Department of Forestry and Fire Protection (Cal Fire), California Coastal Commission and other agencies to encourage them to investigate and possibly pursue criminal charges and seek other penalties.

The resolution comes as good news for residents of the burned areas who say they returned home after being evacuated to find that PG&E had cut down their trees without permission.

A Boulder Creek man whose home was engulfed by the fire says he returned to his property to not only find his home destroyed, but to dozens of downed trees.

“I went back up shortly after the evacuation was over, and PG&E had cut down dozens of redwoods along the private road leading to my home,” said the man, who asked to remain anonymous. “They’ve left logs strewn all over my property.”

Worse, the man said that huge logs now block his neighbor’s right-of-way, and that trees have been slashed well over 150-feet from the power lines.

Residents say the county’s lawsuit will save them from the costly and time-consuming process of filing their own.

“As an individual, if I were to file a lawsuit against PG&E I’d have to absorb all of the legal fees,” the resident said. ”That would be all of the money I’m getting to rebuild my home.”

“We do not take this request lightly,” he said. “The violations of the local and state laws by PG&E and its contractors are serious enough to merit action by our county on behalf of all our residents. Not only for their safety but also for their property rights and the health of their watershed.”

According to county officials, Cal Fire has issued four notices of violation to PG&E, which list more than 300 individual violations of the California Public Resources Code. Those violations include illegally removing trees and other actions conducted by the utility and its contractors, disrupting sensitive habitat and watershed, and violating the rights of private property owners.

Each violation is a criminal misdemeanor that could result in civil penalties up to $10,000.

Moreover, the California Coastal Commission on Nov. 20 sent a letter to PG&E requiring the utility to stop its unpermitted activity, to develop habitat restoration strategies and to seek appropriate permits when conducting its activities.

The CZU fire destroyed more than 900 homes, denuded acres of hilly forestland and damaged and removed numerous trees through its 86,000-acre path of destruction.

Once the fire was extinguished, PG&E began removing trees and clearing the areas around power lines.

But in notices of violation sent to the utility on Oct. 7 and 30, and Nov. 11 and 30, Cal Fire Division Chief Richard Sampson accused PG&E of conducting extensive tree removal operations, and told the utility to apply for the appropriate permits. PG&E on Oct. 20 refused the request.

Sampson also alleges that PG&E and its contractors were cutting trees as far as 100 feet from power lines. He also outlined violations such as unsafe maintenance of roads, and says that runoff from rainfall, in addition to debris, soil and logs left behind by PG&E can harm coho and steelhead habitats.

Impacted areas include the Laguna Creek Watershed, owned by the city of Santa Cruz Water Department, which provides a portion of the city’s water supply.

In addition, the utility violated timber harvest rules by not informing property owners of its actions, and giving them a chance to be heard, Sampson says.

The California Coastal Commission says that the utility’s unpermitted tree removal activities stretch out over about a 17-mile swath, much of which lies in environmentally sensitive habitat areas.

The cut trees have created further problems, as people looking for firewood will drive up to properties and steal hundreds of firewood cords to sell, residents say.

County officials say that, because the removal took place in an area scorched by the fire, the newly denuded hillsides could be more subject to erosion from rainfall. This could result in so-called debris flows caused when heavy rainfall washes sediment, debris and trees downhill.

“PG&E’s unpermitted actions have exacerbated the threat of debris flow by further destabilizing the fire areas that have been scorched,” McPherson said.

Supervisor Ryan Coonerty said that, in making the resolution, the county is not arguing against removing vegetation when needed.

“However, it’s got to be done within the context and rules that have been established in order to balance the needs of private property owners, the environment and public infrastructure,” Coonerty said.

McPherson says that the violations will help the county hold PG&E accountable for the way they respond to future disasters.

Next ArticleOwners of La Perla in Watsonville Living Their ‘American Dream’